Found at zoos and gardens across the country, Sean Kenney’s works of art often call attention to endangered species and advocate for conservation 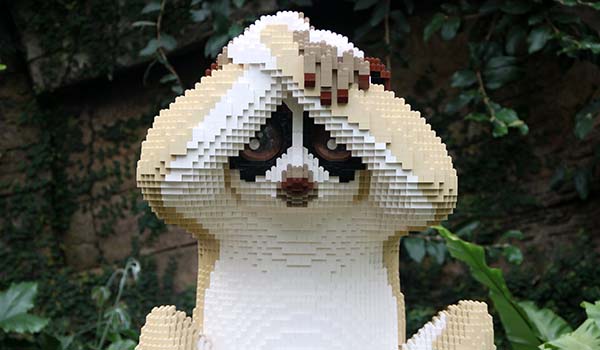 Making a career out of building with Lego bricks sounds like a dream job—just ask any kid (or many adults, for that matter). But it’s the real deal for Sean Kenney, who turned his childhood hobby into a full-time career. For more than 15 years the New York City-based artist has been creating masterpieces using Lego bricks as his medium of choice. His creations—from towering skyscrapers to portraiture—have been featured at museums and zoos around the world, inspiring people of all ages.

His latest project, “Nature Connects: Art with Lego Bricks” is one of his most ambitious endeavors yet. Currently on tour at a number of zoos, botanical gardens and arboretums across the United States, including the San Antonio Zoo; the Denver Zoo; Flamingo Gardens in Davie, Florida; and the North Carolina Arboretum in Asheville, the traveling exhibition, which launched in 2012, showcases a collection of life-size and larger-than-life replicas of plants and animals.

Like most kids, Kenney spent his free time playing with Legos. As he got older, he honed his artistic skills as a cartoonist, studying visual arts at Rutgers University. Upon graduation he worked as a graphic designer, often incorporating Lego bricks into his work. Living in New York City, he drew much of his inspiration from the bustling city surrounding him, creating renditions of the Empire State Building and Greenwich Village among other familiar sights. It wasn’t until a botanical garden in Iowa approached him about making replicas of some of its flowers and plants that he made the natural world his subject. His work began touring to other institutions across the Midwest and proved so popular that zoos began commissioning him to make reproductions of some of their animals.

“Over the years I’ve been continually growing this body of work, and I keep on building,” Kenney says. “I literally just made three flamingos that are now on display at the Denver Zoo.”

Add that feathery flamboyance to a growing assortment of more than 150 animals, including lions, polar bears, buffalo, snow leopards, peacocks, butterflies and ducks, and you have a menagerie of Lego sculptures that look surprisingly similar to the real critters. But getting them to appear lifelike is no easy task.

“One of the biggest challenges is trying to get the softness of [an animal’s] features and the expressiveness of the face right while using what is otherwise a very blocky, low-resolution medium,” he says. “To me, that’s one of the most fun things to overcome. When you’ve done it, you’ve really done it. You step back and are proud of it.”

Kenney recalls a woman at one of his shows turning to see his sculpture of a snow leopard crouched down like it’s on the prowl. She actually jumped back, thinking it was alive. “Knowing that I got the face right means I did it right,” says the artist, “and that’s why the challenge is worth it.”

To pull off this feat, Kenney collaborates with a group of artists who work together in teams of two or three to create each sculpture. Most pieces start out as rough sketches on paper, which are then transfered onto graph paper or computer models to plan out the basic shape and size of the animal. Kenney likens these to “Pixar characters.”

"We gather source photography and other information online," he says. "Sometimes we watch YouTube videoes to see the subject in action."

The artists then use these blueprints as a point of reference as they click together Lego bricks to build a prototype. Once Kenney has a prototype he likes, the team begins building the final piece. From start to finish, a single sculpture can take thousands of bricks and many months of labor to complete. The largest sculptures can take up to nine months to construct. Builders glue each and every brick together as if they’re building a brick wall. A lion, for example, took 474 construction hours and 48,248 bricks to build.

“There’s still a lot of stuff that we do the old-fashioned way, like when we’re adding facial features or we need creatures to interact with each other and show emotion,” Kenney says. “We’ll grab all the funny-shaped Lego pieces like circles, triangles and slopes, and bricks that look like wheels and windows and coffee cups. The real fun is trying to figure out how I’m going to make [an animal’s] eyes look real by using circles and arches.”

Kenney is quick to point out that he only uses bricks that are available to the general public. “None of my sculptures are made with special Lego bricks,” he says. “I use the same ones that children play with.”

As Kenney has perfected his ability to capture the essence of different species, he’s expanded his reach to focus on animals that are either extinct, like the Dodo bird, or endangered. A piece called “Deforestation” features an incredibly rare Formosan clouded leopard found in the mountains of Taiwan. The species' habitat is being threatened and it was believed to be extinct until the leopard was spotted by several witnesses in 2018.

“We placed the leopard so that it’s looking back at an excavator that’s destroying its habitat,” he says. “We first designed this for a local audience in Taipei but realized there’s a global story there. It’s since been on display in the United States and Europe.” It’s slated to be on display at the Grand Rapids Public Museum in the fall.

Kenney's pieces are proving popular with audiences not only because they continue the conversation about conservation, but also for their sheer craftsmanship. Hope Roth, who is the vice president of marketing at the San Antonio Zoo, which has a newly opened drive-through zoo that's been a draw during the Covid-19 pandemic, says that “Nature Connects” has helped “elevate the experience" the zoo offers. The exhibit features 30-plus sculptures, which will be on display through the end of the year.

“Every summer we try to bring in an exhibition that’s going to give more value to our guests, and his pieces do this,” Roth says. “His work is amazing and so impactful when you see it in person. We placed the majority of the sculptures where they’re visible when driving through the zoo. You can really see the artistry.”

While the Denver Zoo, Flamingo Gardens and North Carolina Arboretum don’t offer drive-through options, Kenney's Lego creations are outdoors and interspersed throughout the sites' grounds. All three locations, as well as the San Antonio Zoo, are following strict safety measures during Covid-19, encouraging guests to keep enough distance between one other and mandating that visitors where face coverings.

While Covid-19 may have put a damper on traveling, it hasn’t stopped Kenney from creating new Lego sculptures. For 2021, he's dreaming up a "colorful, punchy and playful" exhibition called "Nature POP" that gives the natural world a new spin.

"Imagine a lawn full of giant bunny rabbits in polka dots and stripes, or a neon-blue woodpecker on a lava-lamp tree trunk," he says. "All built with hundreds of thousands of Lego bricks. It's going to look amazing!"