The 250-Mile Trans Bhutan Trail Will Reopen After 60 Years

After a major restoration project, the path connecting 400 cultural and historic sites is once again passable 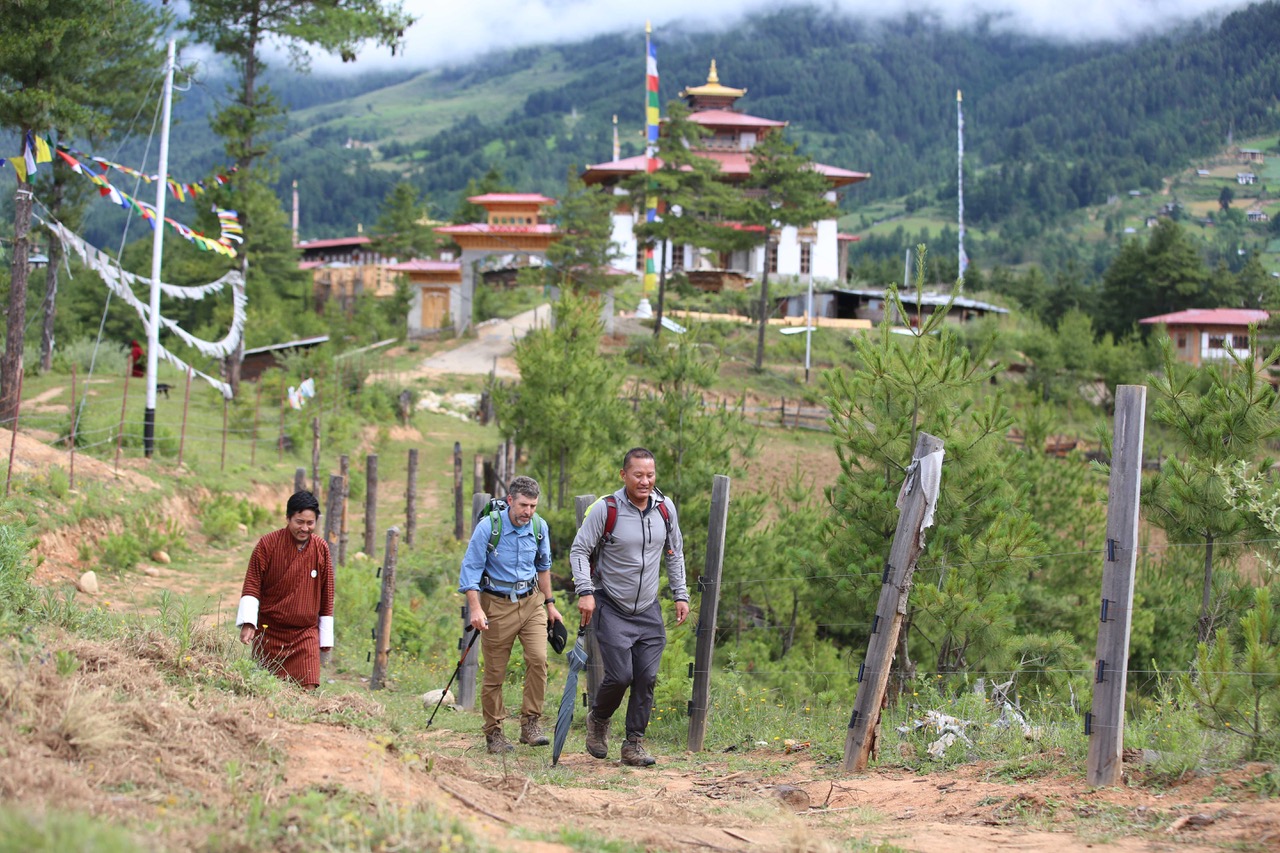 The Trans Bhutan Trail, which was originally part of the Silk Road, is a historic pilgrimage route dating back thousands of years. Bhutan Canada Foundation

On September 28, His Majesty the King of Bhutan will join hundreds of Bhutanese children in Trongsa as they take the first official steps onto the newly restored and reopened Trans Bhutan Trail. The moment is more than 60 years in the making, allowing the Bhutanese people—and tourists—to walk in the footsteps of their ancestors.

The Trans Bhutan Trail, which was originally part of the Silk Road, is a historic pilgrimage route, dating back thousands of years and running east-west across the country for 250 miles. About 500 years ago, the path connected a series of dzongs, or fortresses, that were used to thwart invasions from foreign militaries. Buddhists followed it to reach sacred sites, like the Druk Wangyal and Trashi Choeling temples. Trail runners called garps carried messages along the trail for the political powers at the fortresses, with administrative orders to political alliances and other secrets. And before Bhutan gained independence from Britain and became a country in 1907, the trail allowed the various Himalayan kingdoms along the route to communicate and stay unified as one group fighting together for the territory. For the 50 years after reaching countryhood, the Trans Bhutan Trail was the only way to cross from one end of Bhutan to another.

In the 1950s, however, the government started building a highway across the country. “The highway followed significant parts of the original trail,” says Sam Blyth, the founder of the Bhutan Canada Foundation (which led the initiative to restore the trail), and a trustee of the Smithsonian’s National Museum of Natural History. “When the highway was complete, people stopped walking the trail and got into buses and cars and used the highway.” As a result, the trail began to fall apart. Bridges, stairways and footpaths decayed and became unusable. “Sometimes when the footpaths and bridges collapse, it divides [locals] from relatives on the other sides of the valleys and separates them from lands where they were farming,” Blyth says.

The Bhutan Canada Foundation, an organization with a mission of strengthen well-being and happiness across Bhutan and maintain positive Canadian and Bhutanese relations, along with visionary support from King Jigme Khesar Namgyel Wangchuck, decided in 2018 to fund and fix the route. The project involved clearing all 250 miles of the path and rebuilding or restoring 18 major bridges and more than 10,000 stairs. It was a boon for the Bhutanese people during the pandemic, too—more than 900 furloughed local workers took jobs working on the restoration.

Today, the trail is once again passable from Haa in the west to Trashigang in the east, connecting 400 cultural and historic sites. International tourists on the trail are required to go with a local guide, whether they’re hiking it (which would take about 27 days) or biking it, regardless of group size. As of now, the trail has signage and trail blazes, but no mile markings. A map and app are both in the works.

“When I first went to Bhutan in the 1980s, I walked the country with some people who walked the trail as children,” Blyth says. “I’d always heard of this legendary trail and experience, because it had a big impact on very young children. So when the time came, it was really easy for me to see that this thing really could capture the imagination and would be both a physical experience and educational experience, and to many a spiritual experience.”

Bhutan leadership expects the trail to become part of the national curriculum, Blyth says. Young children will use it to explore local plants and animals, and everyone under the age of 18 will spend a year working on and walking along the trail as part of a national service program. Those who walk the entire length of the trail will earn a certificate of completion and a medal.

Heading from west to east, here are five spots along the trail that hikers or bikers won’t want to miss.

Dochula Pass, close to Thimphu in western Bhutan and about 73 miles into the trail, offers much more than stunning panoramic views of the Himalayas from 10,200 feet up. While here, take some time to explore the Druk Wangyal Lhakhang (a temple built to honor Bhutan’s fourth king, Jigme Singye Wangchuck) and the Druk Wangyal Chortens. At this latter site, 108 chortens—small shrines or monuments—line the pass, and you can help locals hang prayer flags to honor the gods. Nearby, just above the pass, 11 manmade meditation caves painted with different gods and goddesses are set into the hillside. They too were built to honor the fourth king, and all of them have a visual representation of his birthday, November 11, 1955.

At 5,000 feet of elevation and about 105 miles into the trail, Punākha, in west-central Bhutan, served as the capital of Bhutan from 1637 to 1907 (today it’s Thimphu). Two rivers, the Pho Chhu and Mo Chhu, converge here—and at the confluence is Punakha Dzong, the second-largest fortress in the country. Visitors to the fortress can see the preserved body of Zhabdrung Ngawang Namgyal, a Tibetan Buddhist lama who unified the regions of Bhutan into a country-like state in 1634.

Punākha is fairly rural, something the residents celebrate. For Sangay Choden, owner and host of Punākha Phuntshochoeling Heritage homestay, offering lodging and traditional food (like red rice, a potato stew called kewa datshi, and a vegetable and gravy dish called phaksha paa) to guests at her heritage farm near town is an opportunity to teach them about rural Bhutanese life.

“The trail can help people in the community develop, and at the same time, people who pass by can learn about life in the village,” she says. “Mostly it’s to do with preserving our culture and tradition.”

One of the ways Choden does this is by treating guests to a hot stone bath, a wintertime tradition for Bhutanese villagers. A wooden tub is filled with river water, and Artemisia leaves—things like mugwort and wormwood—are added. The bath is heated by river stones, roasted on a fire until they’re glowing and then placed inside a wooden chute next to the tub. At the bottom of the chute is a wooden grate that allows the water to flow around the rocks.

Tour guide Galay Tenzin, who was appointed by the government to work on the trail, inspected the trail and took photos. It took him 35 days.

“It was a privilege to walk in the footsteps of our ancestors,” Tenzin says. “The trail comes to life when there is community around it. I would encourage everyone to talk with the community. You can use a local guide to translate. You really get the old hidden stories about Bhutan.”

The area around Chendebi, a village in central Bhutan about 153 miles from the trailhead, is Tenzin’s favorite part of the trail, thanks to the stories told by the people he met there. A homestay owner told him about a vengeful demon who once stalked this section of the Trans Bhutan Trail during ancient times.

“As we hiked from Pelé la to Trongsa, right after crossing the Chendebji chorten, we came across a big forest called Nyalalum,” Tenzin says. “It is believed that, long ago, a malevolent demoness known as Nyala Duem made this forest as her dwelling.”

As legend has it, Nyala Duem used magic to appear in different forms in order to gain trust from travelers along the trail, before attacking and killing them. She was eventually controlled by a saint, Lam Dub Zhi Dha, who turned her into a guardian spirit in the 1600s. Locals using the trail today still fear the demon, even though she’s long gone.

“There are a lot of pilgrimage and monastery sites,” says Tenzin, about this spot along the trail that’s great for camping. “Sometimes we reach the campsite quite late and don’t get much time to look around. And in the morning, we can hear the chanting, flutes and drums of the nearby monks. Words can’t describe how beautiful it is. It’s important to witness the Trans Bhutan Trail through our own eyes. It will make the trail more memorable and beautiful.”

Trongsa sits at the center of the Trans Bhutan Trail. The town is on a high ridge surrounded by valleys, bookmarked by the fortress Trongsa Dzong. The fortress dates back to 1644, before Bhutan became a country. The dynasty that lived there, the Wangchuck, became the rulers once Bhutan gained independence from British influence in 1907. Trongsa Dzong wasn’t just for protection, either; the fortress controlled trade heading across the country as well.

Today, the Royal Heritage Museum is housed in the watchtower at the fortress. The trail passes through the museum’s property. The museum is six stories and has 11 galleries, and most notably holds the raven-shaped crown of Jigme Wangchuck, the second king of Bhutan, who ruled from 1926 to 1952.

“[The crown is] a symbol of peace, unity and prosperity for Bhutan,” says curator and head of the museum Sangay Tashi.

“When you walk the trail, you can see the development and progress under the leadership of our kings,” Tashi adds. “It’s very historical. Looking at the trail, we can also think of how far we can travel in the future. It combines the past, present and future.”

In Bhutan, women are equal in every way to men. They have equal pay and equal opportunity in entrepreneurship. And women don’t take their husband’s name when they marry; naming is instead matrilineal. To honor that heritage, the trail organization and a local woman guide lead a women’s adventure tour on the Trans Bhutan Trail. One of the stops is to Pema Choling Shedra, a convent that opened in the Bumthang region in central Bhutan (about 226 miles into the trail) in 2001 to create more opportunities for young girls across the country. The convent now has 176 students—the majority of them from rural or at-risk backgrounds. Travelers are able to speak with the students and women living there, to learn about their belief system and the good the convent does, like increasing access to healthy food and providing structured education.

“In the 21st century, the 2,500-year-old teaching of Buddha resonates very strongly with me: he taught that understanding is the key to peace and a harmonious society,” Tshering Dolkar, the marketing manager for the Trans Bhutan Trail, said in a release. “We are bound to meet people with differing opinions which we might not always agree with. Through working on the Trans Bhutan Trail team, I feel like I have got to know my country and myself a little better with every step.”