How to See 16 Unesco World Heritage Sites in 4 Days

Everywhere you turn, great names from the past greet you. 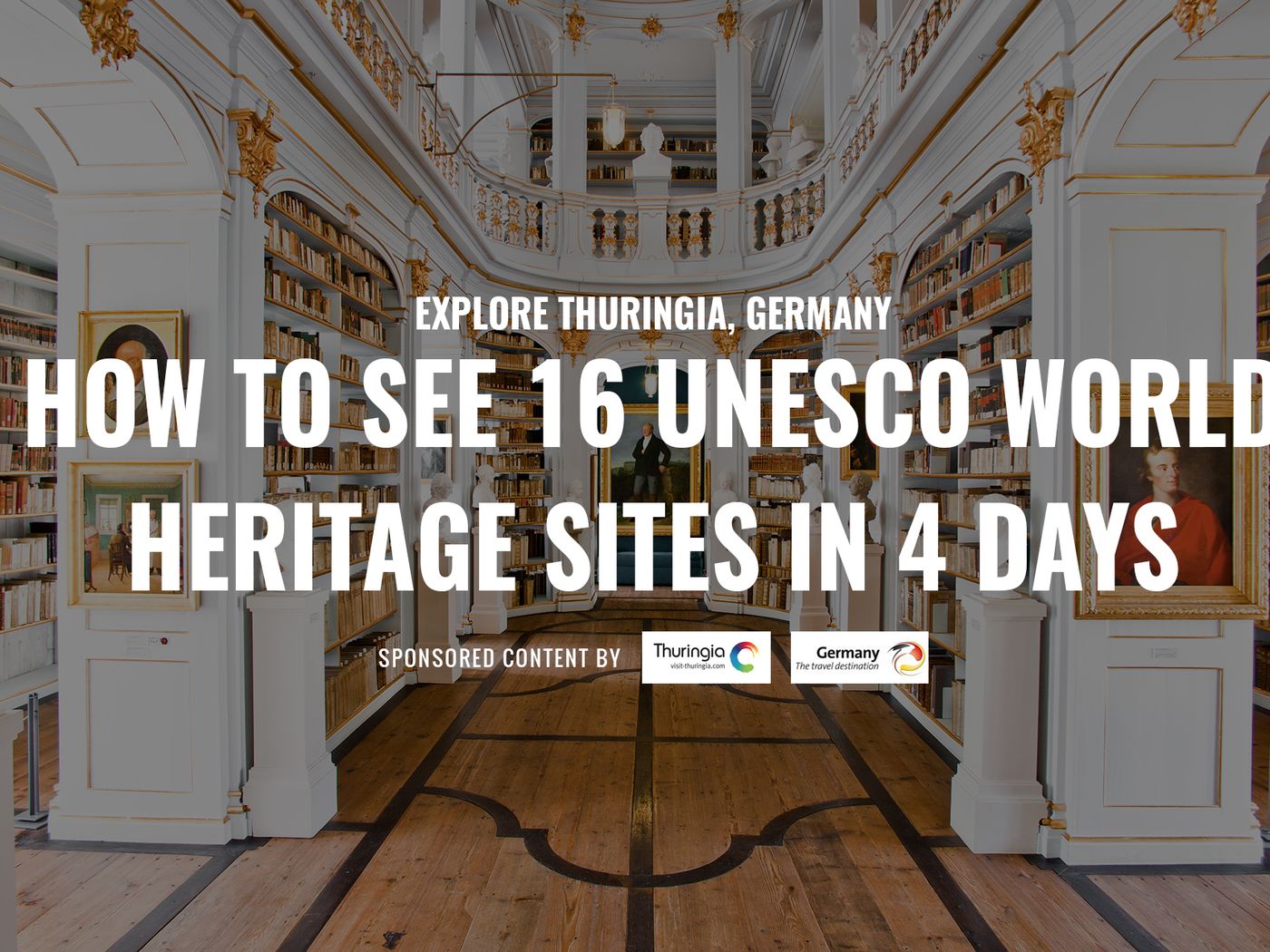 There are not many places in the world where you can visit 16 Unesco World Heritage sites in less than one week. Thuringia, Germany, is one of them. Everywhere you turn, great names from the past greet you: Goethe, Schiller, Luther and Herder, to name a few famous literati. Then there's Bach, Liszt and the founders of the modernist Bauhaus movement, which celebrates its centenary in 2019 in the town of Weimar. And just around the corner, an hour's drive west of Weimar, the legendary Wartburg Castle majestically looms high above the Thuringian Forest and the Hainich National Park, one of Central Europe's last primeval forests. From unique nature to Baroque palaces and living fairytales, this four-day itinerary will bring you face-to-face with Germany's "Greats” – and also its hidden gems.

Begin your day at the Duchess Anna Amalia Library, named after the woman whose patronage drew many leading artists and thinkers to Weimar. Founded in 1691, the library was one of the first to open to the public in Germany. Today, it contains more than one million literary records with a focus on works from 1750 to 1850. Don’t miss the impressive white and gold paneled Rococo-style hall.

Next, head to the house where poet Johann Wolfgang von Goethe lived for almost 50 years until his death in 1832. Additions to the 18th-century house reflect Goethe’s Neo-Classical style: among them, a three-lane staircase and stucco work. Visit Goethe’s study and adjoining private library, where he wrote the majority of his seminal works, such as “Faust”. With the exception of these rooms, which remain virtually untouched, the house and garden are decorated to reflect the last years of the writer’s life.

Just up the road is the home of Goethe’s close friend, poet and physician Friedrich Schiller. His house was the first public memorial to a poet in Germany. It’s hard to miss the bright yellow exterior of this 18th-century townhouse. Though Schiller died in 1805, his family stayed in the home until his wife Charlotte passed in 1826. Make sure to see the attic study where Schiller completed his plays “The Bride of Messina” and “Wilhelm Tell."

Continuing your tour on the pedestrian-friendly “Schillerstraße”, you reach the center of Weimar: “Theaterplatz”. Stop to admire the statue of Goethe and Schiller in the middle of the square, then make your way to three-winged Wittums Palace, distinguished by its yellow exterior and orange accents. Walking through the palace's Baroque halls, it’s easy to picture court life in Classic Weimar. In the Red Salon, portraits of guests including Weiland, Herder, Goethe and Schiller accompany those of ducal family and court. Be sure to stop in to Duchess’ former drawing room as well as the banquet hall with its ornate ceiling paintings.

A short walk east is the Late Gothic Town Church of St. Peter and Paul, built at the turn of the 16th century. Its foundations date back to the 12th century. Don’t miss the winged altar and triptych depicting Great Reformer Martin Luther – who preached in the church – as a monk, squire and teacher. Many other historic figures are connected to the church: Bach played here, and Herder held leadership roles for almost three decades. For this reason, locals often refer to the building as "Herder Church."

Conclude your day at the neo-Classical Weimar Town Palace, designed in its current form by friends of Goethe. The star attraction here is the art collection of the Grand Dukes, dating from the Middle Ages to 1900. See works by August Rodin, Max Beckman, Caspar David Friedrich and the Weimar School of Painters as well as treasures from the dowry of Maria Pavlovna, the Tsar’s daughter.

Today, begin at the Ducal Tomb, the resting place of royal personages and of Goethe and Schiller. Built in the early 19th century and placed in the tranquil “Poseckscher Garten”, it is an impressive example of neo-Classical architecture. Inside the chapel room, admire the glass-encased large-format Bible and gaze up at the mausoleum's star-crowned dome. To the left, stairs lead to the burial vault. Though genetic analysis in 2008 revealed that the remains attributed to Schiller did not belong to the writer, his sarcophagus remains in the vault.

Just east of the Ducal Tomb is one of the most significant buildings of the modern Bauhaus movement, the Former School of Arts and Crafts. Built from 1905-1906 by Henry van de Velde, it now houses Bauhaus University's Faculty of Design. Notable features include an unusually lit winding staircase, as well as three reconstructed wall paintings by Oskar Schlemmer.

The rest of your day is dedicated to exploring Park an der Ilm. Constructed at the turn of the 19th century, its manicured greens surround the Ilm River and are filled with scenic paths, monuments and bridges. One of the major sights of the park is the Roman House, the former retreat of Duke Carl August built under Goethe’s counsel. Inspired by the writer's time in Italy, it resembles an ancient temple with four ionic columns. Inside, wall and ceiling paintings depict Apollo with the muses and Pegasus, and a permanent exhibition chronicles the history of the park.

On the eastern edge of the park is Goethe's first Weimar residence, complete with original furniture and fittings. Built on a former vineyard, it is known as Goethe's Garden House for the three-section garden he cultivated and used for entertaining. In his six years here, Goethe wrote works including the ballad of the "Erlkönig" and the poem "An den Mond." Later in life, he used the house as a retreat.

Don't leave the park without visiting "Haus Am Horn," another relic of the Bauhaus era. Built in four months for the first major Bauhaus exhibition in 1923, this model house epitomizes the union of art with craft.

Thuringia is dotted with dozens of palaces and castles, and Weimar is fortunate that three of the most beautiful are on its outskirts. Spend the day exploring Belvedere Palace, Palace and Park Tiefurt and Ettersburg Castle by car.

Belvedere Palace's gardens are the perfect place to start your morning. Explore its historic orangery and Russian Garden before heading inside to learn about the ducal summer residence. Originally a hunting lodge, the palace was transformed into a Baroque palace by Duke Ernst August. Admire glistening porcelain and glassware in the palace museum, as well as 18th-century weaponry that documents the history of court hunting.

The summer residence of Anna Amalia from 1781 until her death, the Palace and Park Tiefurt's expansive grounds are home to a myriad of sculptures and architectural features including monuments to Leopold and Mozart, a muses' temple and tea room. Don't miss the palaces "Cold Kitchen," which displays historic show meals made of porcelain, wax and papier-mache.

Stop for lunch at Ettersburg Castle to enjoy sweeping views of Weimar. Situated atop Ettersberg Hill, this hunting-lodge-turned-castle complex features two terraces and a 150-acre countryside park. Three castles under your belt, settle in for an hour's drive west through Thuringian countryside towards Eisenach to visit the legendary Wartburg Castle and Hainich National Park.

Witness to 900 years of history, Wartburg Castle is one of Germany's most famous. It was here that Martin Luther, during his exile in 1521, translated the New Testament from Greek to German and where students in the 19th century assembled to fight for a United German state. Rising some 1300 feet above the Eisenach countryside, it stands as a monument to the cultural history of Germany, Europe and beyond. Many consider it the "ideal castle," and it merits a full morning of exploring.

For the afternoon, drive 45 minutes north to the Hainich National Park. The Hainich used to be a military training ground and was renaturalized in the 1990s. Today it’s one of the largest connected deciduous forests in Europe with a natural ancient character and unique flora and fauna. Admire expansive groves of primeval beech trees on a guided tour through the National Park Center, and enjoy sweeping views of the unspoiled wilderness from the elevated Canopy Walk. Visit Hütscheroda Village to learn about the habits of the elusive local wild cat and head to “Hainich View” observation platform to catch a glimpse of the timid animals up close.