Step Inside the Louvre Abu Dhabi 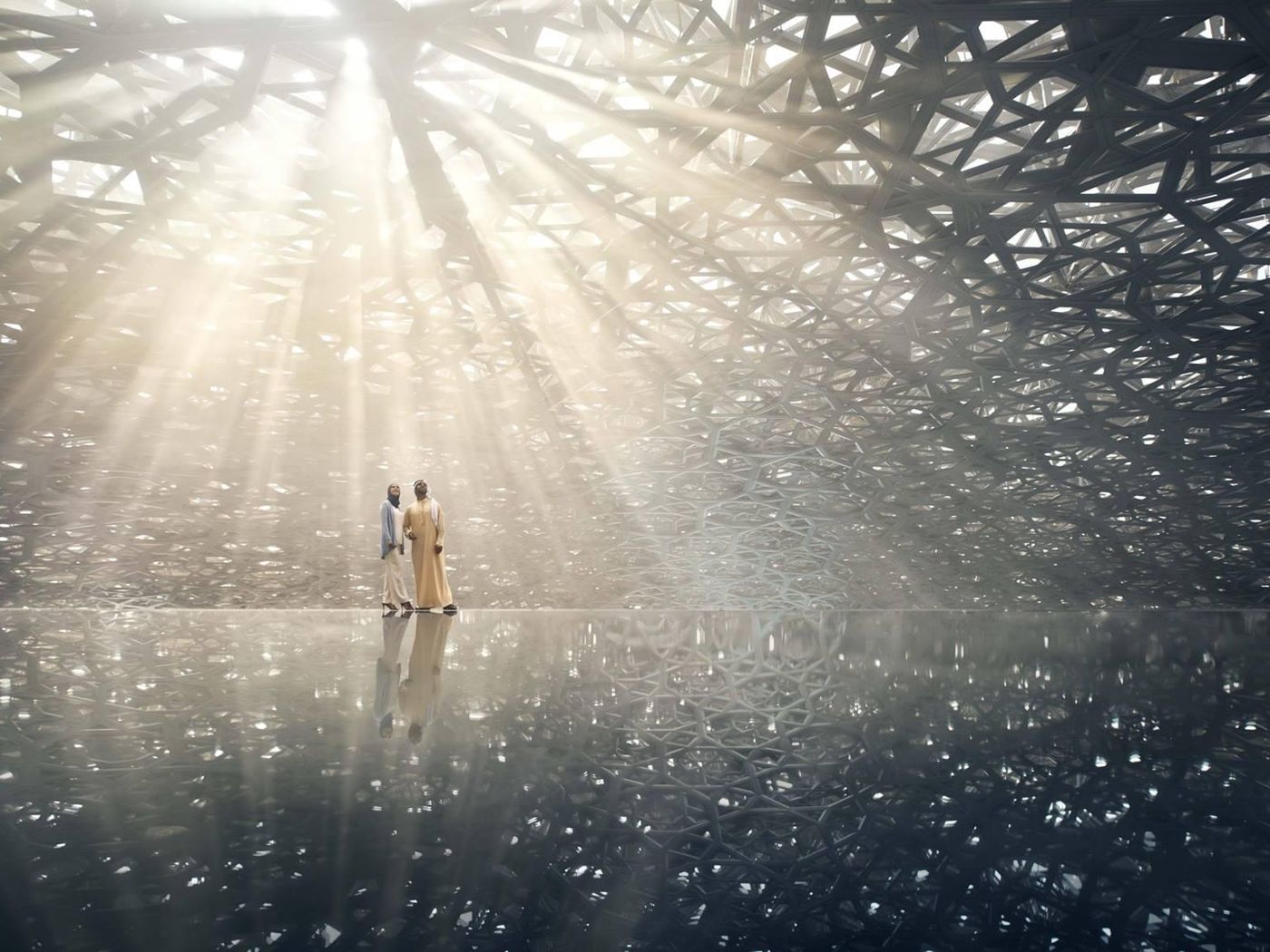 At the Louvre Abu Dhabi, you won’t find an “Impressionism” wing or “ancient Greek sculptures” hall. Walking into the first of 23 galleries, visitors encounter a statuette of an Egyptian god nursing her son next to one of the Virgin Mary and Jesus. In another, a Torah, Bible, Quran and sacred Sutra scrolls are showcased side by side. Elsewhere, Christian stained-glass windows and Islamic lanterns invite viewers to consider why colored glass has been employed by different religions as a symbol of faith.

Rather than presenting its collection based on geography or civilization, the Arab World’s first universal museum employs chronology as its organizing principle. By placing artifacts and artworks from different cultures in dialogue based on shared aesthetics and techniques, the Louvre Abu Dhabi reveals common threads. “The museum celebrates cultural exchange and highlights how interconnected we’ve always been,” says director Manual Rabaté.

Opened in November 2017 on Saadiyat Island as part of a multi-decade partnership with France, the Louvre Abu Dhabi is the first museum in the Arab World to embrace this approach. “The Louvre Abu Dhabi represents a new kind of museum, a national museum with a universal narrative reimagined for the 21st century,” says Rabaté.

Rabaté sees the museum as a chance to present the tale of civilizations in a new light. “As a leading cultural institution, we have the opportunity to tell a completely new story about the history of the world, a story that will affect how we see humanity everywhere,” he says.

Fittingly, the UAE has been a crossroads of culture since ancient times. Today, located between East and West and fueled by a recent economic boom, the UAE has emerged as an international cultural hub, home to more than 200 nationalities.

Designed by French architect Jean Nouvel, the Louvre Abu Dhabi reflects the landscape of the UAE as well as its legacy as a meeting point for cultures. Accessible by land and sea, it consists of fifty-five stand-alone buildings—including restaurants and an auditorium—that visitors can meander in and out of as they would an Arab medina. Waterways recalling Abu Dhabi’s historic falaj irrigation system run through the museum, and as the sun moves from west to east, a rain of light trickles through the museum’s massive latticed dome, reminiscent of sunlight filtering through palm fronds.

Presented in 12 chronological chapters spanning prehistory to today, the museum’s galleries explore such themes as fertility, power, and the divine. Its permanent collection of more than 600 artifacts, together with loans from 13 French museums, are an impressive lot, ranging from 12th-century Islamic and Christian fountain spouts to Picasso’s 1887 self-portrait to Ai Wei Wei’s “Fountain of Light” sculpture.

In addition to the galleries, the museum will host four temporary exhibitions per year. Globes: Visions of the World, on display through June 2, is a stunning collection of rare objects related to global exploration. An exhibition of the world’s first photographs, Opening the Album of the World: Photographs, 1842-1896, is slated for later in 2018.

Co-Lab: Contemporary Art and Savoirfair, a temporary exhibition that launched in December and displays the collaborations of four UAE-based artists with historical French manufacturers, is a testament to the swift integration of the museum with the local arts community. Reflecting the UAE’s commitment to a knowledge-based society, the Louvre Abu Dhabi has also invested in interactive and family-friendly exhibits for its Children’s Museum, as well as a training-workshop program for university students.

“Culture and education are indispensably linked,” explains UAE Minister of State Zaki Nusseibeh. “Today, it’s not enough to take a child into a school that is first rate, if he or she doesn’t also have a museum that he can go to or music that he can listen to or a book fair that that he can attend or a translated work that he can read.”

Since opening, the museum has attracted not only UAE residents, but also international tourists, artists, curators, heads of state and Hollywood celebrities, among others. “The museum has truly become a magnet for local and international talent,” says Rabaté, adding that the Louvre Abu Dhabi “appeals to everyone.”

By all signs, the Louvre Abu Dhabi has cemented the UAE’s reputation as an international arts destination, and Rabaté is aware of the responsibility that comes with this position. “Louvre Abu Dhabi has an important role to play in opening people’s eyes to different perspectives on art, religion, culture,” he says.