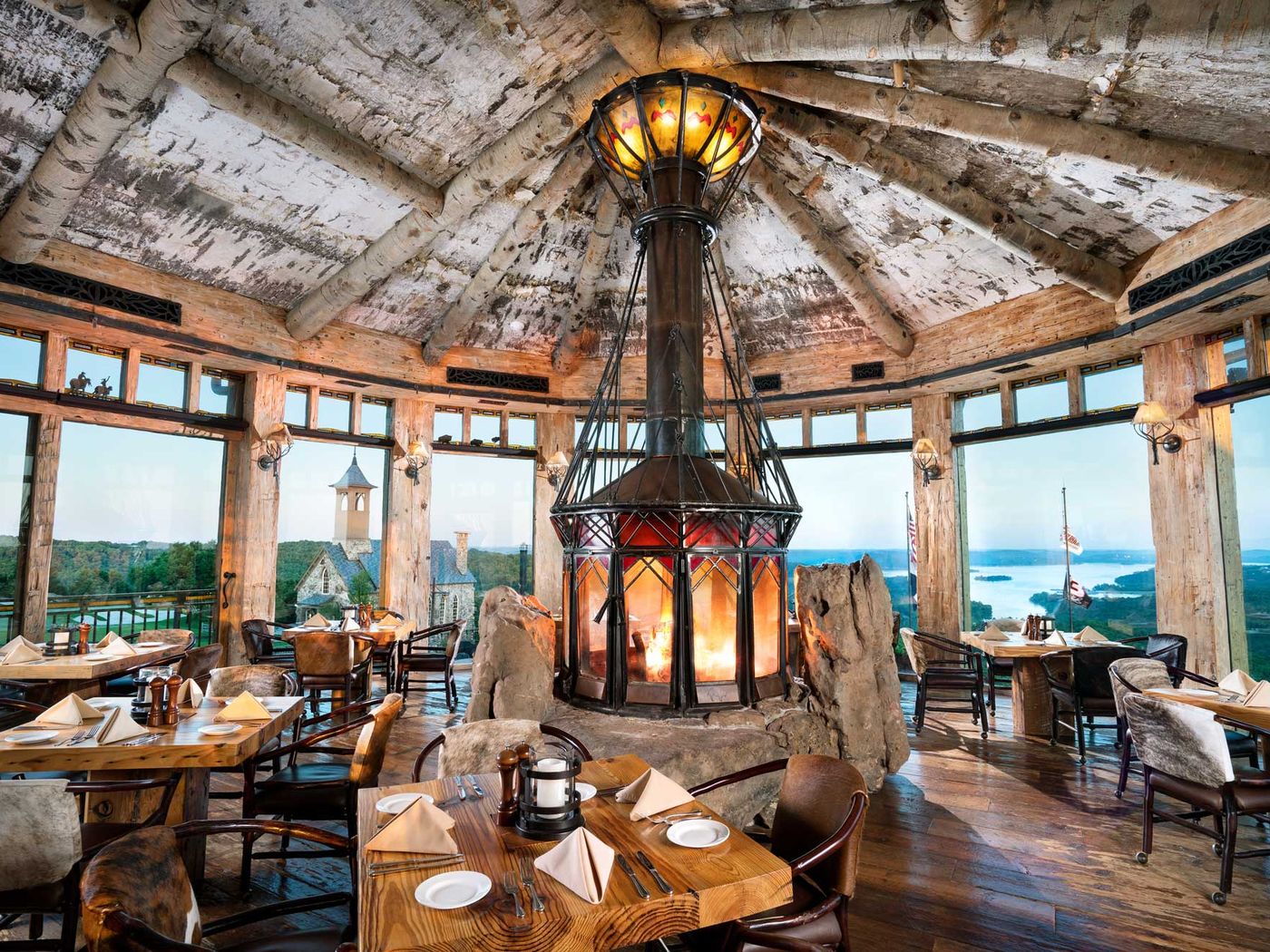 “Nothing helps scenery like ham and eggs.” At least, that is, according to Samuel Clemens, the famed Missouri-born author better known by his pen name, Mark Twain. And yet, the Show-Me State actually provides an abundance of both: unforgettable meals, set amid gorgeous locales. In every corner of the state—from the cities and small towns that dot the Mighty Mississippi in the east, through the Ozark Mountains, and all the way into the ‘Paris of the Plains’ in Kansas City—incredibly scenic destinations sit hand-in-hand with rich culinary traditions and one-of-a-kind dining experiences. While there’s no shortage of options, here are seven extraordinary restaurant experiences in Missouri you don’t want to miss.

It stands to reason that the best farm-to-table dining experiences would be found on a farm, and this one is a must. Just shy of 80 miles northwest of St. Louis on the route to Mark Twain’s famed stomping grounds in Hannibal, the city of Clarksville may be small in size (population: 437)—but when it comes to dining experiences, it packs a big culinary punch. Within its confines, the award-winning Overlook Farm & Inn sits on 325 acres of land, including a pair of historic inns—Rackheath House and Cedarcrest Manor, the latter of which is the oldest operating B&B in the state—as well as a collection of barns and stables, pastureland and orchards, wedding and event spaces, and a variety of berry and vegetable gardens that supply the sustainable kitchen. From charcuterie boards to the farm’s hearty Inn Dinner, you won’t go hungry on this farm; but the real standout is the Bounty of the Farm breakfast for two, featuring an in-suite private chef who cooks breakfast your way, right from the comfort of your own kitchen. Fifth-generation proprietor Nathalie Pettus can accommodate just about any dietary need or restriction on request—just be sure to reserve your table at least 48 hours prior to your check-in.

Amid the varied culinary pleasures of Kansas City, not least of which is this foodie town’s famed barbecue, you’re bound to get a little thirsty. Thankfully, the expansive Boulevard Brewing Company is standing by to quench what ails you. The twelfth largest craft brewery in the U.S., Boulevard was founded in 1989 as the brainchild of John McDonald who, upon tasting the sweet nectar of Belgian beers, decided to bring a bit of that variety and complexity back to the Midwest. With 30 tap handles and a variety of options—from year-round favorites to seasonal brews, and limited releases to the bold, high-ABV “Smokestack” series—this laidback brewery can please just about any palate. For a little activity with your chosen ale, skip your Sunday brunch and head here for free Beer Hall Bingo, a favorite in these parts from 11 am to 1 pm weekly. Can’t make it in person? You’re missing out—but you can still get a taste of Boulevard brews in 38 states across the country, as well as in D.C.

The Lake of the Ozarks is more in demand these days thanks to the runaway hit television series Ozark, a popular Netflix drama now in its second season that propelled the region onto the world stage. But give that map a second glance: while the centrally located resort destination near Osage Beach has been getting most of the attention from the series, the region known as the Ozarks actually spans a considerable swath of southern Missouri. Those willing to venture about 100 miles south of the more heavily trafficked areas will find something much more akin to the onscreen setting: actual solitude. This is particularly true at Rockbridge Rainbow Trout & Game Ranch, a hidden gem tucked within the foothills of the Ozark Mountains. Located about 70 miles from Branson and 80 miles from Springfield, the ranch offers peace and quiet even in peak season with 2,000+ acres of picturesque lake- and riverfront, scenic bluffs and tranquil valleys. The main restaurant serves up breakfast, lunch and dinner year-round, including a savory breakfast menu with all the fixin’s, and an incredible trout menu that offers a half-dozen delectable ways to order your fresh-caught fish. For a truly authentic meal, opt for the Catch & Keep option that allows you to fish this privately owned (read: permit-free) lake and reel in your own trout dinner, with the property taking care of all the messy work—cleaning, packaging and freezing your fish for you—until you’re ready to cook it yourself.

There’s more to this great American city than Budweiser and baseball, particularly for those in search of local Midwestern fare. Just a 15-minute drive west of the Gateway Arch National Park, the nearly 1,400-acre Forest Park offers a range of light recreational activities amid the urban sprawl of downtown St. Louis, so you’re sure to work up an appetite in these parts. When hunger strikes, head to The Boathouse at Forest Park, where you can grab a hot chocolate in the winter months, cool off with a chilled beverage in the summertime, throw back a few mimosas at Sunday brunch, or simply order up a range of lunch and dinner fare year-round. There’s no bad time to visit here, but warmer months certainly afford the best chance to take advantage of other amenities, like paddleboarding and boating, kayaking, or just enjoying the lakefront boardwalk with a glass of wine al fresco. You’ll also find live music seasonally.

Top of the Rock Dining, Ridgedale

Tucked amid the Ozark Mountains in southwest Missouri, Top of the Rock offers respite to the entertainment-weary spectators of nearby Branson. Just a 15-minute drive south, this tranquil resort complex affords a quiet home base for the dazzled throngs of visitors who frequent the world-renowned live shows of this Midwest entertainment hub, or an elegant dining alternative for those who simply appreciate a great meal with a sweeping view. Boasting the highest elevation in the county, the Top of the Rock property offers a variety of culinary options to suit every taste, but its signature Osage Restaurant is not to be missed. Occupying what was once a private home, the venue serves sophisticated riffs on comfort foods, such as seared scallops and braised short rib fondue—and those are just the appetizers. Settle in for an unforgettable meal overlooking picturesque Table Rock Lake, then head to the lower level for a nightcap at Buffalo Bar. For something a bit more low-key, head to Arnie’s Barn, named in honor of renowned PGA Tour player Arnold Palmer, and sample Mexican fare beneath the timber trusses of a 150-year-old barn. To elevate your experience, try pairing your dinner with a Lost Canyon Cave and Nature Trail tour. Discounts may be available to those who book the Top of the Rock Sunset Ceremony.

For first-time visitors to the capital city, a stop at the Missouri State Penitentiary is a must. Already a century old when Alcatraz first opened its doors in 1934, it’s fair to say that this well-known jail site has seen its share of history. But the nostalgia need not end there. Just a few blocks down from the east side landmark, Prison Brews offers a decidedly more favorable place to serve time—sipping on fresh, handcrafted ales and munching on a full menu of savory fare, including burgers, brats, pizzas and peel-and-eat shrimp. The dining room itself is decked out in detention center flair, with jail cell bars separating the bar from the main dining area and a variety of prison relics placed throughout the interior, making it a singular place to share a meal with your fellow (voluntary) culinary inmates. For a little recreation in the warmer months, hit the bocce courts under the covered patio while you’­re there—that is, if the warden will allow it.

Situated near the midway point between Jefferson City and St. Louis, the city of Hermann is at the center of the geographical area known as the Missouri Rhineland. Founded in the 1830s by German settlers and known for its peculiar but formidable landscape, this old-world village is a drive-by location for many—but do stop. Set on a charming 19th-century estate, Stone Hill Winery is Missouri's oldest winery and boasts the largest series of underground cellars in North America. Its Vintage Restaurant, located in an 1840s carriage house and horse barn, serves up a variety of authentic German specialties. Whether sitting down to eat or touring the cellars, you'll feel suspended in another era. 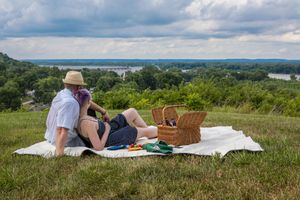