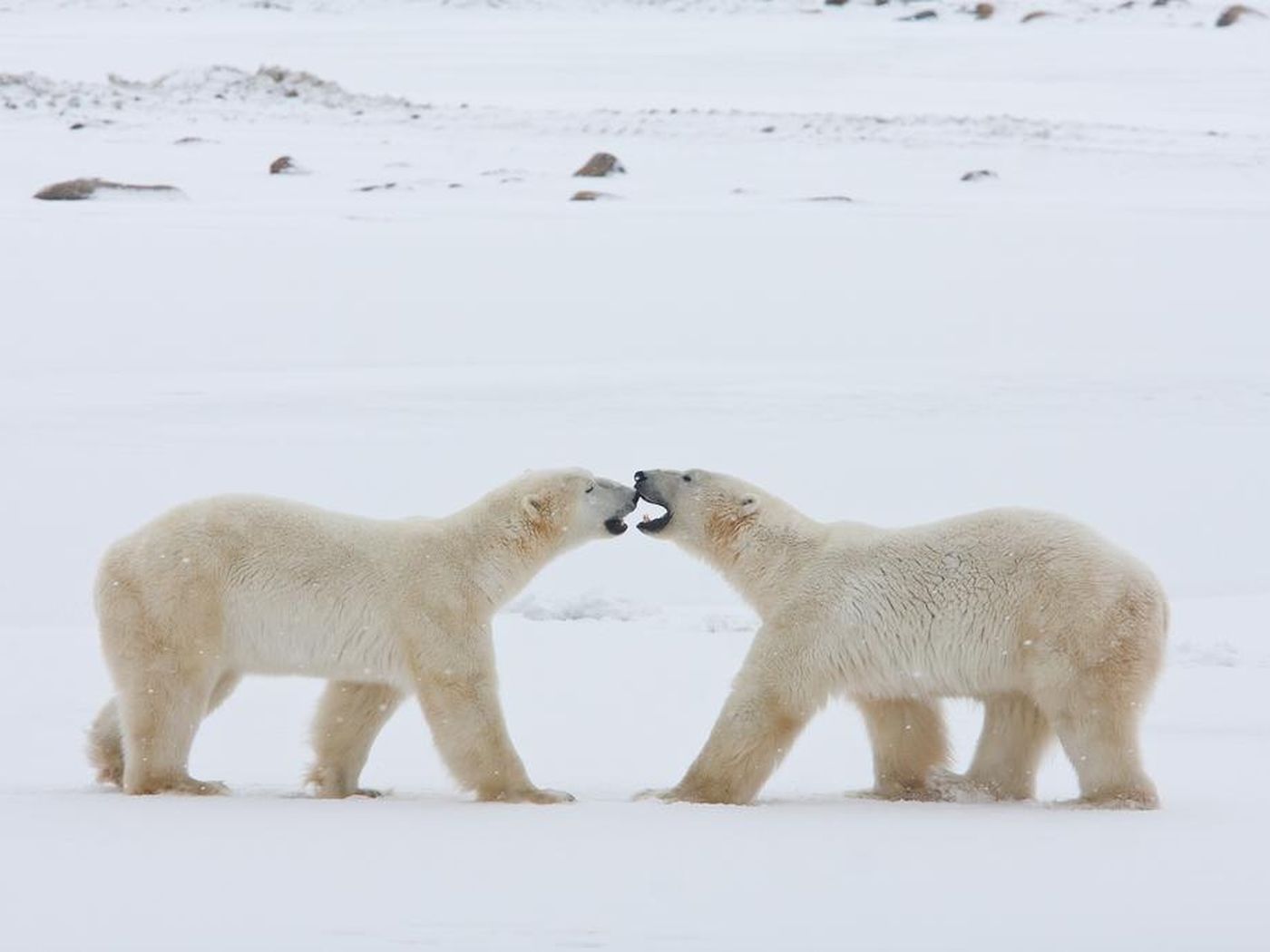 It takes an incredibly tough person to live in Churchill, Canada. Located on the banks of the Hudson Bay in Manitoba, the Arctic town lies 625 miles north of Winnipeg. To get there, you must fly or take a slow-moving train built on shifting permafrost. Winter temperatures average below freezing, and the weather can change at the blink of an eye. But the town’s 800 residents don’t just contend with the elements – Churchill is directly on the path of the Hudson Bay polar bears’ annual migration as they move from land to winter hunting grounds on the sea ice in October and November, earning it the title of ‘Polar Bear Capital of the World.’

Captivated by the idea of a remote polar bear town, actor, producer and travel blogger Juliana Dever, who played Jenny Ryan in the popular ABC TV series “Castle,” and accomplished travel writer Sherry Ott ventured to Churchill separately last month to witness the migration and experience firsthand the challenges of Arctic life. To document their travels, they put the new HTC Bolt™ smartphone, featuring Corning® Gorilla® Glass 5 to the test. Between its strong, aluminum unibody construction and the superior damage protection of Corning Gorilla Glass 5, the HTC Bolt phone is built to be tough.

Consisting of one main street and surrounded by miles of desolate terrain, Churchill can feel like the end of the Earth. "Spindly narrow trees stick up out of the tundra and look like toothpicks leaning every which way," Sherry wrote from her train. "Sometimes their trunks are completely bare of branches except for the tops where there’s a little tuft of green. They remind me of something I’d see in a cartoon or Dr. Seuss book, a little slinky and sort of sad looking."

Before heading out into the tundra in search of bears, Juliana and Sherry spent several days exploring the town. Juliana noticed that normal activities, like walking, were especially hard in the extreme environment. “It’s so icy in Churchill that I’ve been walking like a penguin 2avoid falling” she tweeted. While ice and cold are not two of a smartphone’s best friends, knowing that the Corning Gorilla Glass 5 is four times more drop-resistant than competitive glasses put Juliana and Sherry at ease. The HTC Bolt’s glove mode also came in handy in the frigid temperatures. “Seeing the Hudson Bay for the first time was exciting, and I could grab a quick snap without having to freeze my fingers,” Juliana wrote. “The wind coming off of the water is positively icy, even though ice hasn’t formed there yet.”

Tundra Model. LOL. Whatever. The hood of this coat is everything. . Standing in front of the Hudson Bay which has yet to freeze. The polar bears are migrating to the banks of the water, everyday waiting for ice to form so that they can get out there and hunt for food. . Temps today were 26*F/-3*C. That's below freezing, so come on, ice! (I feel crazy saying that! ) . Shot on the new #HTCBolt w #GorillaGlass 5.

Churchillians live in a polar bears’ world. Though revered, the bears present a very real threat. By the time they reach Churchill, they have been without food for several months. "July through November, a polar bear is like a fish out of water," Sherry said. "It's essentially a marine mammal on land... not where they belong. They aren't eating [much], they are roaming around for four months until the ice forms and they can get back out and hunt again."

Visitors are briefed on polar bear safety upon arrival, and a polar bear patrol team responds to calls 24/7, taking bears that come too close to the town to a polar bear holding facility by the airport. One morning in Gypsy's Bakery, Sherry overheard that a bear had been found and removed from the roof of the Waste Transfer Station. While polar bear live traps—large cylinders baited with seal meat—do a good job of keeping bears at bay, sometimes wandering animals must be tranquilized and airlifted by helicopter to their holding cell. So far, the 2016 bear season has been an active one. When Sherry visited, the patrol reported 223 calls on the polar bear hotline, 22 bears handled, 15 released and 7 in holding.

One of the fundamental rules of polar bear safety in Churchill is don’t walk alone, and don’t walk after dark, Sherry says. The exception to this rule is Halloween night, which took place during her visit. To make the holiday possible, the town ramps up patrol forces, and trick-or-treaters are cautioned against wearing white to avoid being mistaken for an errant bear. For Sherry, Halloween night was a highlight of her experience. After trick-or-treating for a while with six-year-old Kara, dressed as a unicorn, she joined members of the volunteer fire department who took occasional breaks from their patrol to hand out candy. She was impressed by how the town came together despite the cold weather and hungry, roaming bears. “You could tell how close the community was,” she said.

On the outskirts of town, Dave Waspsuk, a member of the Métis First Nations tribe and third generation Churchillian, treated Juliana and Sherry to a taste of the Churchill tundra with a dog sledding run on his “Ididamile” course. Waspsuk founded the Hudson Bay Quest, a dog sled race spanning hundreds of miles, and regularly patrols his property to protect his dogs from bears. Reaching speeds of up to 10 mph on the Ididamile, it can be hard to do anything but smile through the windchill and sharp turns, but Juliana and Sherry managed to capture the experience on their phones.

To complete their Churchill experience, Juliana and Sherry spent several days on the monolithic Tundra Buggy®. Elevated several feet above the ground and resembling a cross between a Hummer and space shuttle, the vehicles take researchers and tourists into the heart of polar bear land over some of Churchill’s toughest terrain. Juliana likened the experience to “a very slow bucking bronco” and “being inside a shaking paint can, only in slow motion.”

From the Tundra Buggy, Juliana and Sherry witnessed polar bears only a few feet away. “You lock eyes with this bear, and you realize that you’re so close to one of the most magnificent animals that we have on land,” Juliana said. “It kind of sticks with you, it really does."

Sherry had seen polar bears in the wild before, but only from afar. Being so close to the apex predators was awe-inspiring, she said. “We were stopped on the Tundra Buggy, and there were two bears napping. Before I knew it, they were up on their hind legs sparring, and I just remember gasping ‘Oh my god, they’re huge.’”

On the Tundra Buggy, the Corning Gorilla Glass 5 was put to its biggest test. At one point Juliana dropped her phone on the floor of the outside observation deck, but picked it right back up, unscathed, to snap the perfect polar bear picture, thanks to the phone’s quick-launch camera. For Sherry, the phone’s ability to deal with dramatic weather changes was key. “Less than an hour ago I was enjoying a blue sky sunrise, now I can barely hold on to my phone in the wind," she wrote. "The Corning Gorilla Glass 5 wasn’t phased by the cold weather or snow today at all!” Switching between hot and cold—in this case, the heated car to outside observation deck—can fog up a DSLR lens, she noted, but the phone held up.

Thanks to the HTC Bolt and Corning Gorilla Glass 5, Juliana and Sherry were able to capture memories for a lifetime of their trip to one of the toughest environments on the planet. "I’m still processing, but [Churchill] is a place where you feel cold and really warm at the same time," Juliana said.