The Patents Behind Christmas Lights

This Christmas, take a moment to appreciate the many innovations that make holiday light displays and the strand of bulbs on your tree possible 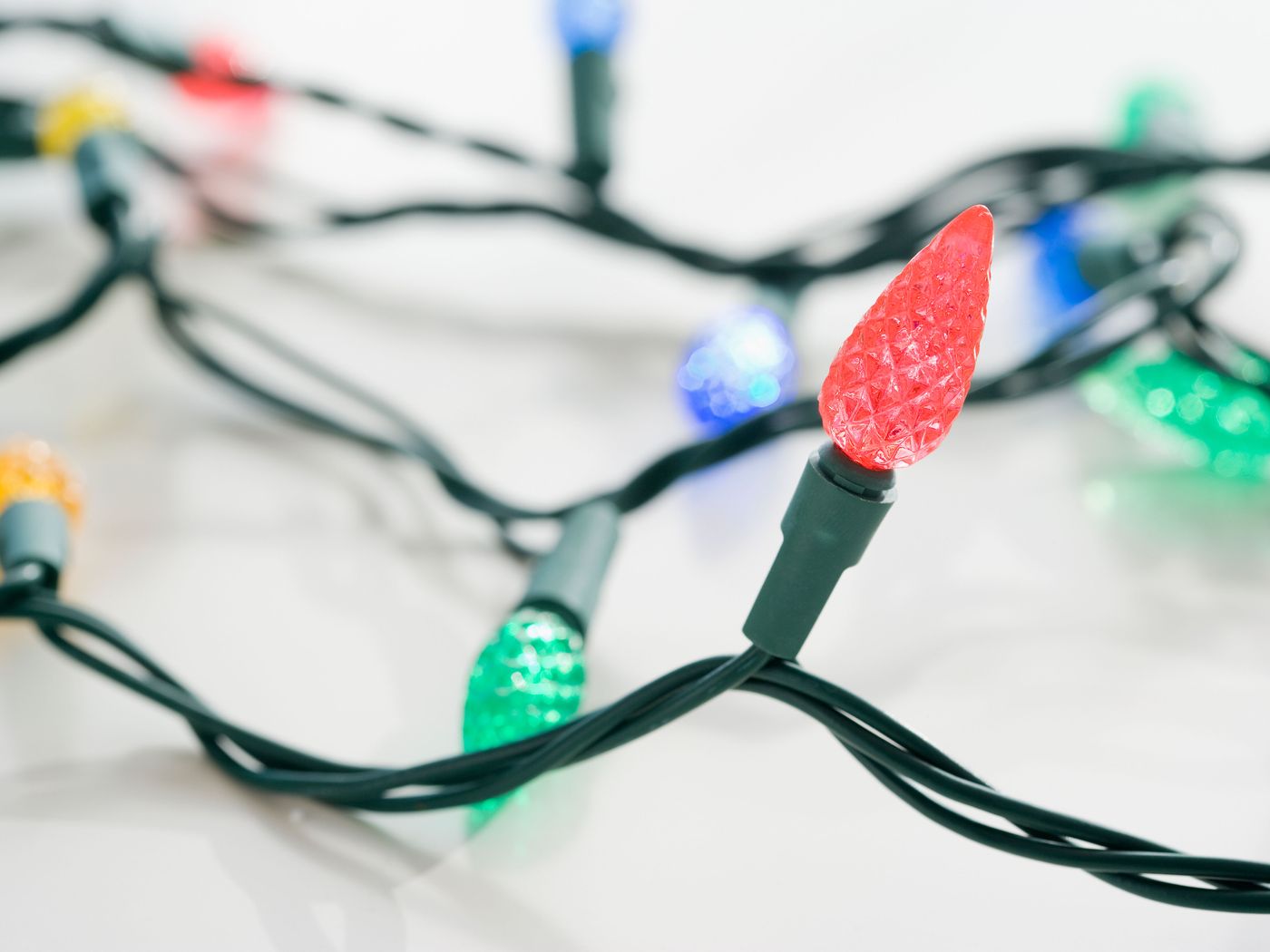 Evergreen trees have held a special place in celebrating the winter solstice. To mark the shortest day of the year and the official start of winter, people in pre-Christian Europe hung evergreen boughs over doors and windows, as a talisman to keep away evil and a symbol of the hope of spring and everlasting life. As Christianity spread into Europe in the 3rd and 4th century AD, the tradition of decorating with evergreen boughs was incorporated into Christmas.

Bringing a live evergreen tree indoors and decorating it became a tradition in 16th-century Germany. The Protestant reformer Martin Luther is historically credited with adding candles and lighting to Christmas trees in his home after seeing trees illuminated by the stars at night. Candle-illuminated trees became a German tradition, one brought to the United States by early German settlers, though they did not become a sensation in the U.S. until an engraving of the British royal family’s Christmas tree at Windsor Castle was published in The Illustrated London News in 1848. Prince Albert was German, and Queen Victoria’s mother had also been German, so decorated trees were something familiar to the royal family. This engraving, showing a tiered tree covered in ornaments and lit candles, popularized Christmas trees. They were the trend setters of the day; as Victoria and Albert did, the rest of the world followed.

Lighting a tree with candles was very dangerous; the tree needed to be fresh. Typically, lighting the Christmas tree involved buckets filled with water placed nearby to douse the tree if it or the surrounding area caught fire. Given all of these precautions, the candles would be lit once on Christmas Eve.

In 1882, after Thomas Edison developed a practical electric light bulb, Edward Johnson, his friend and partner in Edison’s Illumination Company, created the first set of “Christmas lights,” a string of 80 red, white and blue lights, which he wound around his Christmas tree. In 1895, the White House Christmas tree was lit by hundreds of multi-colored incandescent lights.

Incandescent lights illuminated Christmas trees throughout the 20th century. While there were improvements, they all functioned the same basic way as Edison’s original light bulb: electricity flows thought the filament in the bulb, the filament heats up by electrical resistance, the bulb gets very hot, and light is produced when metals in the filament become so hot that electrons are excited to higher orbital levels and almost immediately fall back to their original orbital level.

The color of light produced is directly related to the excitation of electrons in the material used to make the light source. Electrons jump from one orbital level, called HOMO, or highest occupied molecular orbital, to the next LUMO, or lowest unoccupied molecular orbital, and when the electron relaxes back, electromagnetic radiation, such as visible light, is given off. The nature of the electromagnetic radiation is related to the distance between the two levels (HOMO-LUMO).

The color of light produced by this excitation is also dependent on the distance between the orbital levels. Traditional Edison (incandescent) bulbs produce a white light because there are many different energy levels, so all the colors of the spectrum are produced. This is why when you put white light from a light bulb through a prism it breaks up into different colors.

Incandescent bulbs are not particularly energy efficient—a good percentage of the energy is lost as heat. And while incandescent bulbs are much safer than using candles to light a tree, and they can be used more than once, they still get very hot. Many dry Christmas trees have caught fire from the heat generated by the bulbs igniting dry, extremely flammable, evergreen needles.

LED (Light Emitting Diode) Christmas lights, on the other hand, provide advantages, when it comes to energy efficiency and temperature, as well as new lighting designs and techniques. LEDs produce light in the same way that incandescent lights do at a quantum level: electrons are excited and give off light when they relax. The difference is in how this excitation occurs: in the case of an LED, the electricity that runs through the material directly excites the electrons, not heat. With this process, LED lights use 80 to 90 percent less energy than comparable incandescent Christmas lights.

LEDs were first patented by James Biard and Gary Pittman while working for Texas Instruments. Their patent (Pat. No. 3,293,513), titled “Semiconductor Radiant Diode” and granted on December 20, 1966, described the first patented solid state device to produce light from electricity. The gallium-arsenide diode produced infrared light, which is not visible to the human eye.

While working at General Electric, Nick Holonyak invented the first LED to produce visible light, in this instance red, by modifying gallium-arsenide with phosphorus, which shifted the light emitted by the crystals from the infrared to red. The foundation of this work is covered by his patent (Pat. No. 3,249,473), granted on May 3, 1966.

Unlike incandescent bulbs that produce a wide spectrum of light and appear white unless they are coated with a paint to change the color, LED lights produce color depending on the compounds chosen to produce the light: a red string of LED Christmas lights can be made from compounds that emit red lights, blue ones from compounds that emit blue light, and so on. White LED lights are different. There are a few materials, such as Yttrium-Aluminum garnet (Y3AL5O12) materials, that when put in LEDs produce a white light. However, most white LED lights produce light by carefully combining different light-emitting compounds within the bulb structure (e.g. typically a blue emitting compound, a red emitting compound and a green emitting one).

A great advancement in the production of red LEDs came from the work of Paul Bailey and his colleagues working at Monsanto, who were granted Pat. No. 4,039,890 on August 2, 1977. They invented a two dimensional array of LEDs, in which the lights could be individually controlled. While this structure produced red light in a grid pattern, “Other combinations and materials can be readily envisioned by those skilled in the art to provide different color or multicolor displays.”

This seminal patent provided a foundation for LED screen displays used for everything from computers to televisions to phones. LED screens produce different colors by mixing red, green and blue lights in different combinations; based on the RGB (red-green-blue) color model, any color can be produced from these three colors.

The array of pixels present in a modern LED provides a foundation for tunable Christmas lights and displays where individual lights are controlled. In the same way that a pixel on a screen changes color to display part of a picture, Christmas lights with red, green and blue-emitting LEDs in the same bulb can produce any color of the rainbow, as well as white light. The individual lights can be turned on and off, and the color changed.

One can now have one set of lights on a Christmas tree and have them change to whatever color desired. This type of technology also allows large outdoor displays where lights can both dance across a building and change colors synchronized to music. These lights and computerized controllers, which are becoming more accessible to tech savvy consumers with each year, have more in common with television screens than the early string of red, white and blue lights that Edward Johnson wrapped around his Christmas tree.

On December 24, 2013, Pat. No. 8,614, 632 was granted to Kenneth Wells and Victor Hatch for a “Method of and Apparatus for Controlling a Source of Light in Accordance in a Source of Sound.” This system controls RGB lights and converts sound waves into signals that control the lights, so instead of having to program the lights to the music, one can allow the system to interpret the music and produce a light show.

So where will Christmas tree lights go from here? I have a few predictions.

The color of LED white lights will improve, and as more people use LED lights, energy usage and cost of operating lights will go down. The way Christmas trees will be illuminated will continue to evolve, and the lights will become less and less like the original incandescent lights used; they can be small and at the same time bright, and do not need to take the shape of the original light bulb.

I can even envision a safer version of the candles that lit the trees of Martin Luther and Victoria and Albert. After all, as inventor Harry Wainwright described in his 2006 patent for a “Flame Simulating Device,” LEDs can be arranged to actually look like real candles.