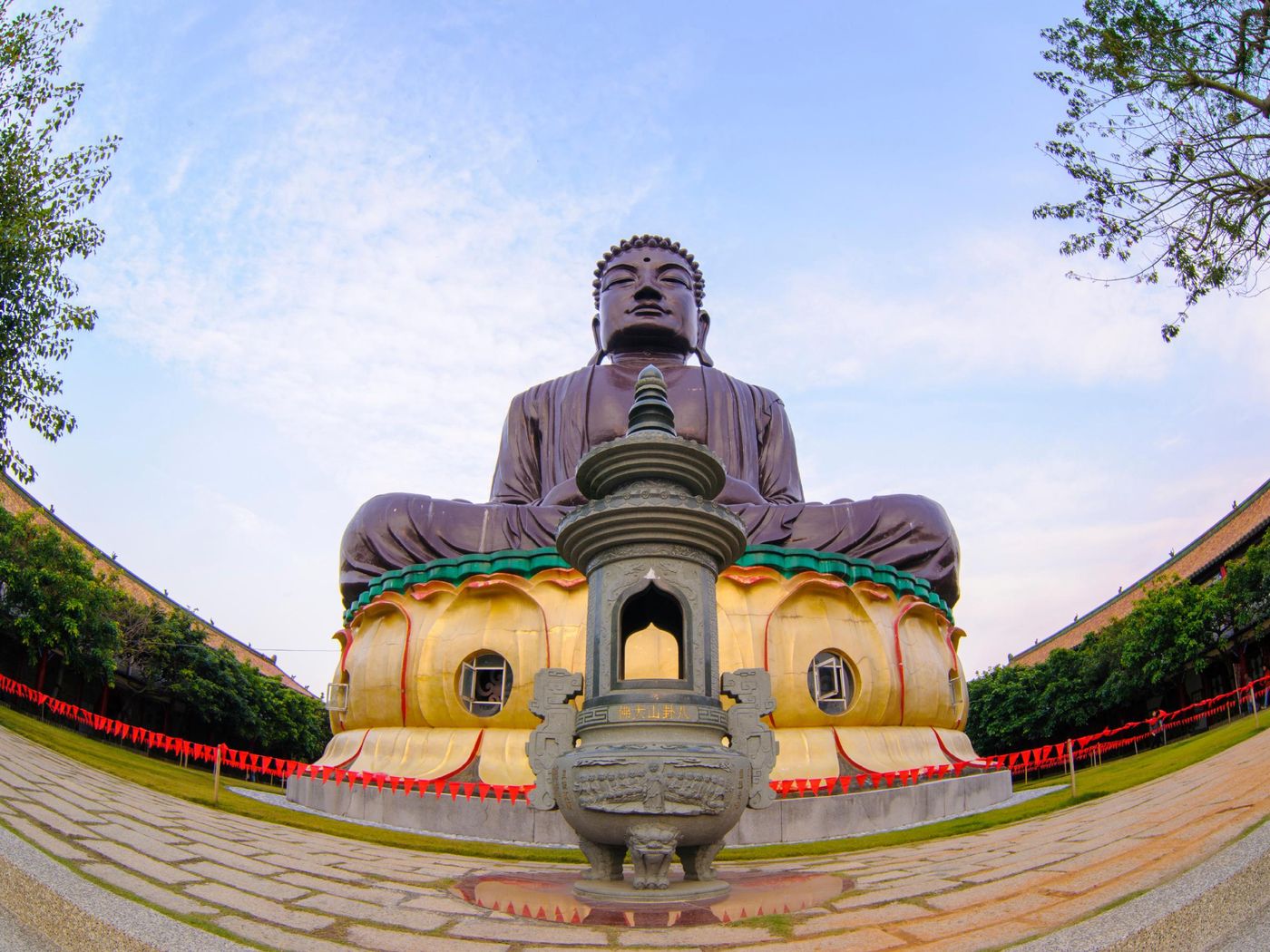 The phrase “looking at the world through another’s eyes” has new meaning from inside the 86-foot-tall Big Buddha statue in Changhua City, Taiwan. Visitors can climb the six floors within the statue's hollow interior and peer out the eyes of one of the world’s largest Buddha statues. From the hilltop located along the Bagua Mountain range, travelers and locals lose themselves in infinite ocean vistas and sweeping views of the vibrant cityscape. Changhua, the modern cultural and political center of Changhua County, dotted with sparkling skyscrapers and scooter-lined streets, is equally well known for energetic outdoor market, delectable street food snacks and sacred temples dating back to the early 18th century. The Big Buddha looks out over it all, the city’s guardian.

The Big Buddha, perched atop Eight Trigram Mountain, was built in 1962 using more than 300 tons of concrete and steel bars on the site of a former military observation zone. In 1894, during the Sino-Japanese War, one of the bloodiest battles took place on Bagua Mountain and after World War II, the statue was erected with a Memorial Hall to commemorate those who died during Japanese invasion.

Today, visitors can walk through the six levels of the statue and learn about Buddha’s path to enlightenment through a journey in life-sized dioramas. The second story chronicles the story of his birth; the third, his enlightenment under the Bodhi tree; the fourth, his life as a teacher and the fifth, his death and achievement of nirvana. From the sixth floor, visitors will have earned the honor of looking through the windows of his eyes.

Set aside time to explore Dragon Mountain Temple behind the Buddha image—it’s one of the largest temples in Taiwan and boasts a remarkable three-tiered roof. Back in the heart of the city, on Kongmen (Confucius Door) Road, spend time at the Confucius Temple which was constructed in the early 18th century. These sights are great to view on foot, of course, but so much more awaits by bike.

A short distance away from the many-storied apartments and zippy scooters of central Taiwan’s second-largest urban center, travelers can explore lush jungles of bamboo-lined mountain roads and cycling paths leading from Changhua all the way to Nantou County. The most popular route for tourists and local families is Road 139, which begins at the heart of Changhua City. The well-paved path leads adventurers of all skill levels 23 miles south through the rolling hills between Baguashan and Ershui, under tree canopies, past sweet pineapple farms and fields of wild flowers.

Out-and-back, the trail is about 46 miles—a solid trek for competitive cyclists certainly, but most casual riders pump the breaks at Fengshan Temple, about halfway. (Novice cyclists please note that there is an elevation gain of roughly 1,700 feet from the path’s start near Big Buddha.)

During the first third of your journey, the route is pleasantly shaded by thick overhanging trees. By the time you emerge from the cover of leaves, you’ll be hungry, but that’s never a problem for long on this route. As you pass countless pineapple and dragon fruit farms, make sure to stop at the small stands along the road to quench your thirst with fresh juices. Ask a local, and they’ll say wait until you get to Sunnyhills, about halfway down route 139, for the shop’s famous pineapple cakes. You’ll have earned it.

If you haven’t eaten too many cakes, keep trekking until you smell fresh flowers. Though the path can be enjoyed during any season due to Taiwan’s year-round moderate temperatures (the temperature never drops much below 50F), the routes most beautiful from late March to May, when the cherry blossoms are in full bloom, and in late spring and early summer, when the petals of the youtong trees  paint the mountainsides white.

Looking for a shorter ride? The Ershui Bike Path, a 3.4-mile trail (6.8 miles out and back), follows the operational, single-track Jiji Branch Line and is a great way to take in the region’s locomotive history. The ride features sunflower blooms and historical sites like the two antique steam trains at the Ershui Railway Station.

For quick access, touring bikes can be rented across from the Changhua Train Station, a few miles northwest of Big Buddha. Bikes can also be rented from many local farms. For longer term rentals, most major city bike programs are available in the northern city of Taipei and the southern city of Kaohsiung. Fullsized bikes are permitted on most trains, making it easy to explore more of the “Bicycle Kingdom's” great cycling paths.