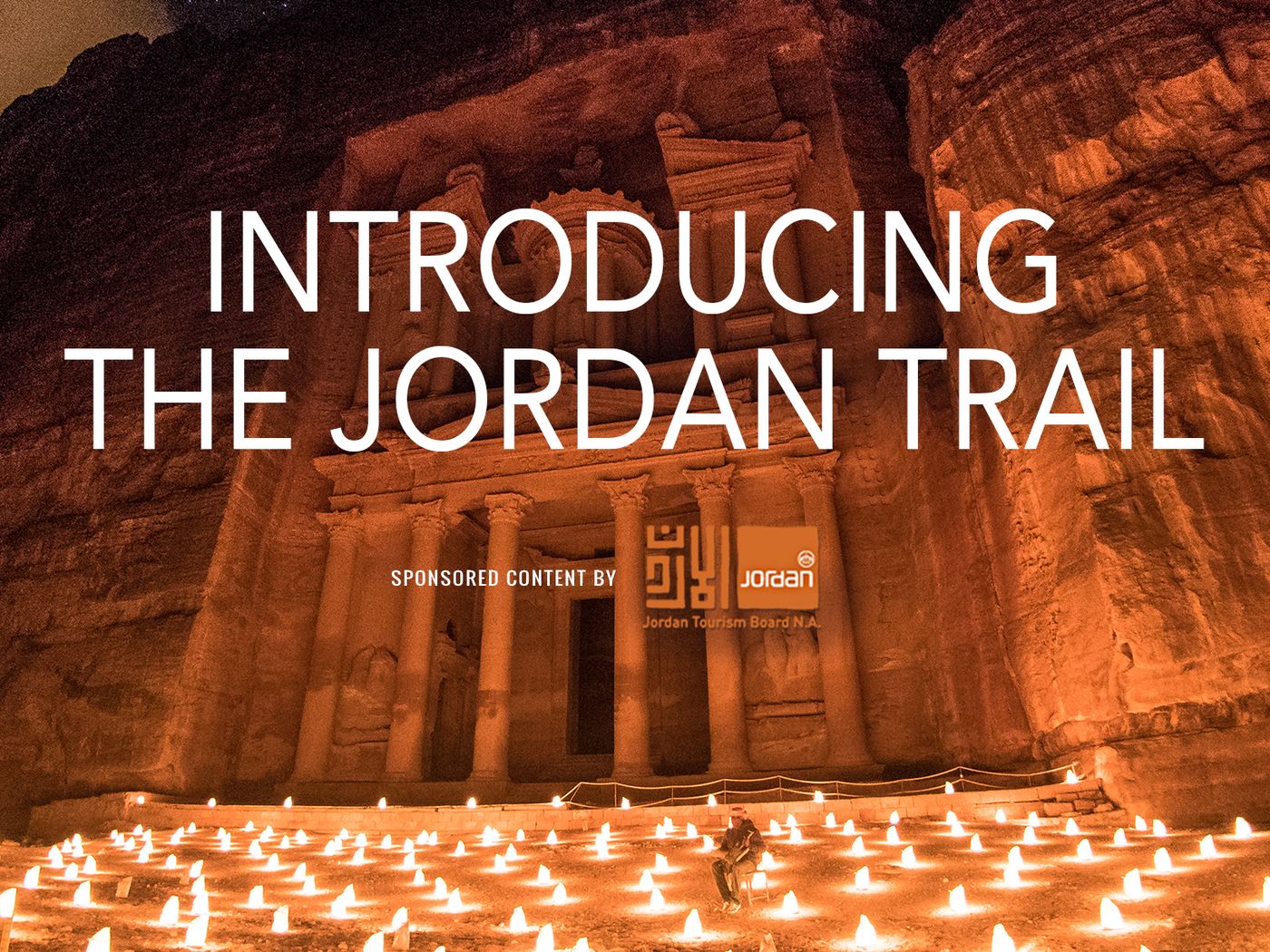 Thousands of years ago, Jordan was the center of the King’s Highway, the historic Iron Age trade route stretching from Egypt to Damascus. During the first centuries B.C., Nabatean merchants seized control of the route, and the Romans after them. Here, empires were won and religious wars fought. Now, thanks to the 400-mile Jordan Trail, you too can travel on foot across this fabled terrain.

Divided into eight sections, the trail runs along Jordan's western border and traverses some of the country's most stunning scenery, from the verdant farmlands of Um Qais in the north to the desert landscapes of the south, ending at the Red Sea. It also connects travelers to parts of Jordanian culture outside of beaten tourist paths. ​One of 12 social enterprises that make up the Meaningful Travel Map of Jordan, the trail passes 52 communities and offers travelers the opportunity to support local businesses through authentic, sustainable experiences. It can be hiked in its entirety as well as in parts—each section lasts four to six days—or even as a day-trip.

Joining the first official through-hike in spring 2017, renowned travel writer Andrew Evans reflected that “hiking the Jordan Trail feels like paradise." Walking through the sandstone cliffs of southern Jordan on the final leg of his trip, a feeling of charting new territory came over him: “The cliffs are magnificent, and yet we [were] the only ones around to acknowledge their greatness—for a week, it seems, our tiny group of hikers [were] the only inhabitants in Jordan’s best neighborhood."

From bucolic walks through the countryside to hilltop fortress views and starry nights in the Wadi Rum desert, the path is as beautiful as it is diverse. If the Jordan Trail isn’t already on your travel list, here’s why it should be:

To walk the Jordan Trail is to become part of a legacy that dates back millennia. The trail crosses some of Jordan’s most significant historical sites, including two of the country’s five Unesco World Heritage sites—Petra and Wadi Rum—with off-route access to the other three. Arriving via the trail at Petra, the Nabatean capital built into rose-red sandstone cliffs, and Wadi Rum, an ancient desert valley, brings their history to life, as these were the same routes used by thousands of ancient merchants centuries before. To reach Petra, hikers first pass Little Petra, the city’s northern outpost, before entering the ancient capital through a back door. In Wadi Rum, old shepherd paths snake past thousands of ancient petroglyphs and rock inscriptions written by the Nabateans and nomadic Thamudic tribes.

Happening upon lesser-known sites is another gift of the open road. Stand among basalt ruins at Um Qais, once a flourishing arts city of the Roman Decapolis, and look out over the Sea of Galilee; then pass through the Tel Mar Eliza Byzantine monastery ruins, believed to be the traditional birthplace of the Old Testament prophet Elijah. Visit the medieval mountaintop castle of Ajloun, an important Arab stronghold in the battle against European Crusaders, followed by its opponent Kerak Castle, a Crusader fortress complete with dungeons and a moat. From Ajloun, pass through the Christian-Arabic village of Remeimeen with its neighboring church spire and minaret.

Jordan’s scenery changes dramatically from north to south. Begin your journey in the north at Um Qais with its wooded hills, fertile farmlands and hot springs. Here, citrus orchards, olive groves and green fields stretch for miles amid rocky outcrops speckled by daisies, poppies and the rare endemic black iris. “Every day the path turns greener, as if some divine hand has Photoshopped the landscape, dialing up the brightness to an implausible green that demands sunglasses and a long afternoon in the shade of a jujube tree,” Andrew wrote of his travels through the northern section of the trail.

Country lanes turn into rugged wadis and cliffs as the trail approaches the Jordan Rift Valley, offering fantastic views with no civilization in sight. Soon, the climate gets drier and layered limestone transforms into smooth slot canyons striped with iron ore. The labyrinth of pastel colors gradually transforms into the monolithic rose-red sandstone walls of Petra, and then to the towering mountains and red desert sands of Wadi Rum. In this greatest stretch of the trail’s wilderness, colors shift from Sahara whites to Martian reds throughout day. At night, the only light is that of the stars.

Emerging from the heat and intensity of Wadi Rum, the Red Sea appears on the horizon over vertical cliffs of granite, promising crystal waters and breezy beaches.

Hospitality is in Jordanian blood. In towns or on the road, you will be invited into the homes of locals for tea or food wherever you go. In the agricultural commuities of the north, a shepherd may offer homemade cheese or citrus fruit from his farm, or bread baked fresh in a taboun (clay oven) and topped with za’aatar—a Jordanian spice blend of salt, pepper, thyme and sesame seeds. In the Bedouin camps of the south, you may find yourself sipping smoky herbal tea as zarb, a mixture of meat, rice and vegetables, simmers in a stove beneath the sand. The Jordanian Trail is a tasting menu of the country’s unique and mouthwatering cuisine.

A number of communities along the trail offer homestays and a chance to experience their cultures firsthand. The Al Ayoun Society—one of Jordan’s first tourism cooperatives formed by the neighboring villages of Orjan, Rasoun and Baoun—manages six homestays in the verdant hills of the north. Local guides take visitors out on nearly seven miles of hiking trails past ancient sacrificial altars, cave shelters and olive groves dating back to Roman times, imparting their knowledge of the land while finding time for the group to enjoy local food or tea.

Tucked deep in the mountains of the Dana Biosphere Reserve on the route from Dana to Petra in the south, the solar-powered Feynan Ecolodge has garnered multiple accolades. Lit by candles at night and set against the magnificent Wadi Feynan, it epitomizes Bedouin hospitality. Take a guided bike or RWD tour of the ancient copper mines nearby and watch spiny tail lizards scuttle out of your way. For a true desert experience, head to Wadi Rum and sleep under the stars in a traditional Bedouin tent made from black goat fur.

Discover more about the Land of Hospitality.