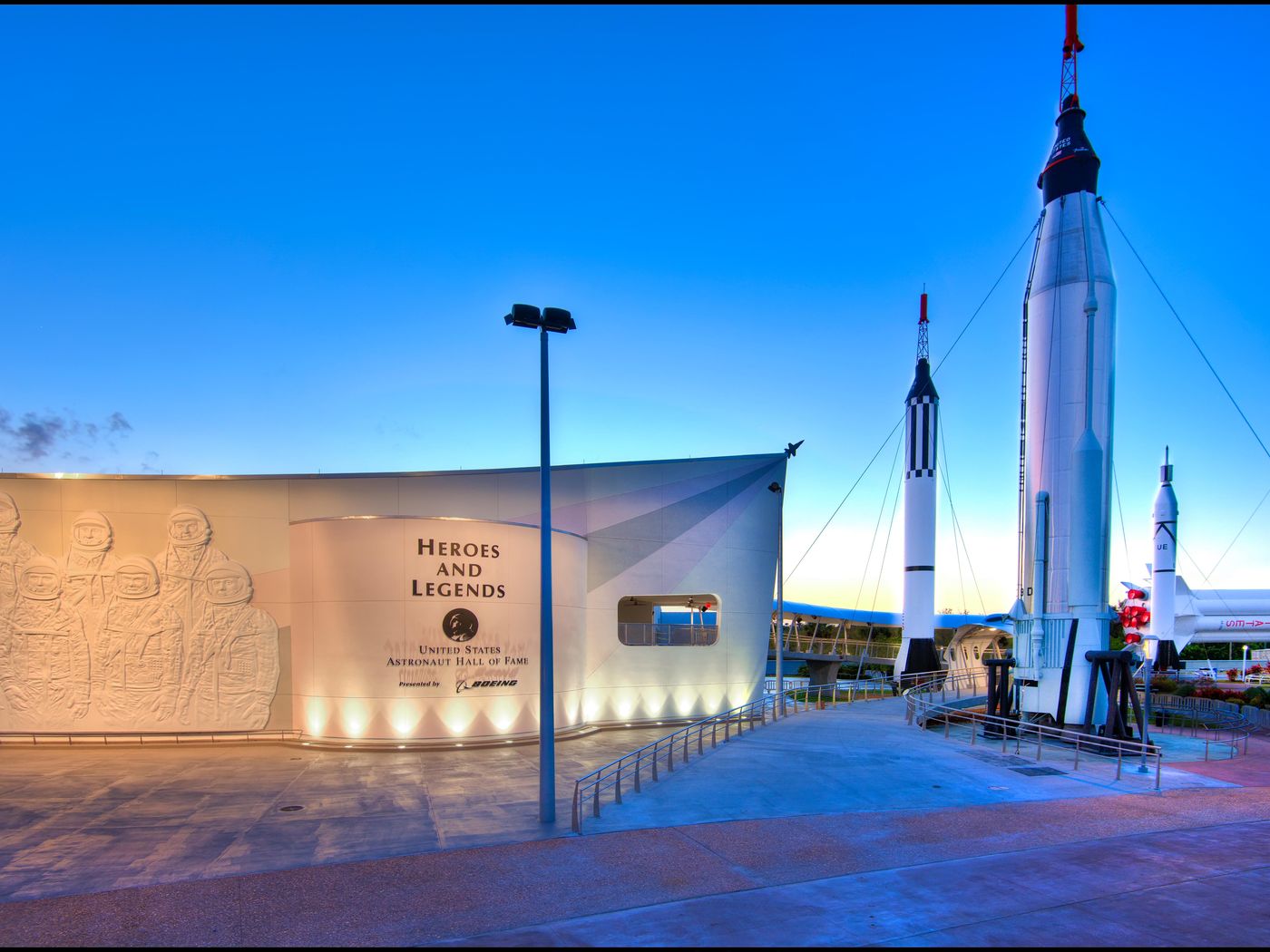 On May 5, 1961, just three years after NASA began work on Project Mercury in Cape Canaveral, Florida, Alan Shepard launched into sub-orbital flight, becoming the first American in space. By putting his life on the line, he paved the way for future astronauts and a dramatic race against the Soviet Union. Now, thanks to state-of-the-art technology, Shepard’s heroism and the daring feats of other early space pioneers come to life as never before in the Kennedy Space Center Visitor Complex℠’s brand new Heroes & Legends exhibit featuring the U.S. Astronaut Hall of Fame®.

Located at the entrance to the complex, Heroes & Legends is a powerful prelude to the Kennedy Space Visitor Complex experience. A giant fiberglass bas-relief of the original Mercury 7 astronauts on the façade of the building sets the tone, suggesting that these pioneers risked their lives for a cause much larger than themselves.

A ramp representing the journey to the cosmos sweeps through the complex’s historic Rocket Garden towards the entrance. Here, doors open to a 360-degree discovery bay, featuring images of heroes ranging from John F. Kennedy to comic book characters. The lights dim, and a film begins, posing the question: “What is a hero?” Astronauts, celebrities and visitors recount their inspirations: Star Trek’s George Takei talks about the huge influence of his father on his life and career, and crowdsourced videos show that heroism exists among us in many forms.

Ushered through another set of doors, visitors encounter a 225-degree custom, 28-foot tall wraparound theater. Shot in 6K resolution and presented in 3D, the Through the Eyes of a Hero presentation engages all four senses as it follows the journeys of four astronauts: Alan Shepard, Neil Armstrong, John Glenn and Jim Lovell. Sound, scent, touch and sight combine to recreate the thrills and dangers of their early missions: as rockets launch on screen, wind rushes through the vents, and the scent of burned rubber fills the air.

One of the most powerful moments of Through the Eyes of a Hero is the sensation of looking down at Earth, according to Cecil Magpuri, Chief Creative Officer at Falcon’s Treehouse, who oversaw the exhibit's creative execution. “You think about these astronauts, and you think that the launch was one of the biggest, most amazing parts of their experience, but it wasn’t that,” he says. “It was looking back at our planet.”

In the next room, technology combines with historic artifacts to tell the story of the early space program. Walking out onto a platform, guests can peer into the Sigma 7 Mercury capsule flown by Wally Schirra on October 3, 1962, and gaze upon the Mercury-Redstone 6 rocket. In particular, the Sigma 7 offers a sense of the less-than-luxurious conditions experienced by America's first astronauts. Crammed inside this capsule for nine hours, Schirra doubled the distance traveled by all previous U.S. astronaut missions and fueled NASA's ambitions for long-duration missions.

Below, nine interactive pods, designed to reflect the inside of a shuttle cockpit, represent the nine characteristics of a hero: inspired, curious, tenacious, passionate, courageous, confident, selfless, disciplined, principled. In each, a touchscreen allows guests to choose an astronaut artifact on display and hear the story behind it, drawn from 126 interviews with astronauts and family members. Artifacts range from science fiction books to the shimmering silver suit worn by Gus Grissom, the second American in space, during his 1961 Mercury flight. In one interview, Apollo 13 commander Jim Lovell recounts a night as a carrier-pilot when his plane instruments went dark. Only by identifying fluorescence in the ocean was he able to locate the position of his ship and reset course in the pitch black.

In another pod, Buzz Aldrin recounts the story of designing the Apollo 11 mission patch, which features an eagle and olive branch instead of the celebrated astronauts. Therrin Protze, Chief Operating Officer of Kennedy Space Center Visitor Complex, explains the creation of the patch was an example of selflessness. “They wanted it to be about the mission,” he says. “They didn’t want it to be about the people.”

Around the corner are the original Mercury Mission Control room consoles. Sound and lighting effects recreate the tense moments preceding the landing of Friendship 7 by John Glenn. The early technology of the mission control consuls poses a stark contrast to the hologram next door, which portrays Gene Cernan’s harrowing Gemini 9 spacewalk on the surface of the actual capsule. Voiceovers from Cernan (pilot) and Tom Stafford (commander) together with computer generated imagery recreate the moment when, heart racing and visor fogged, Cernan was unsure if he could return inside. On the opposite side of the projection, the capsule's quarters rest at eye-level.

Concluding the experience is the breathtaking U.S. Astronaut Hall of Fame®. A bronze statue of Alan Shepard welcomes visitors to the hall and glowing, etched likenesses of the 93 inductees line the walls. Behind Shepard, touchscreens surrounding a 360-degree video cylinder allow visitors to learn more about the inductees and, as a memento, take a photo with one of the Mercury 7 astronauts. Thanks to complex code, historic photos and photos of new inductees move continuously around the cylinder while still portraits of the Mercury 7 appear for fixed amounts of time.

Protze hopes that visitors leave with a deeper understanding of heroic qualities embodied by America's first astronauts. "Heroes & Legends offers the opportunity to learn about the amazing attributes of our heroes behind the transformative and historical events that have shaped the way we look at space, the world and the future," he says. "It will not only entertain and inspire guests, but lay the groundwork for their interactions throughout the other amazing attractions to create memorable space experiences."

Through the use of technology, the exhibit becomes a “space experience," Protze says. “The idea of actually being a part of space—feeling space—is our main goal."