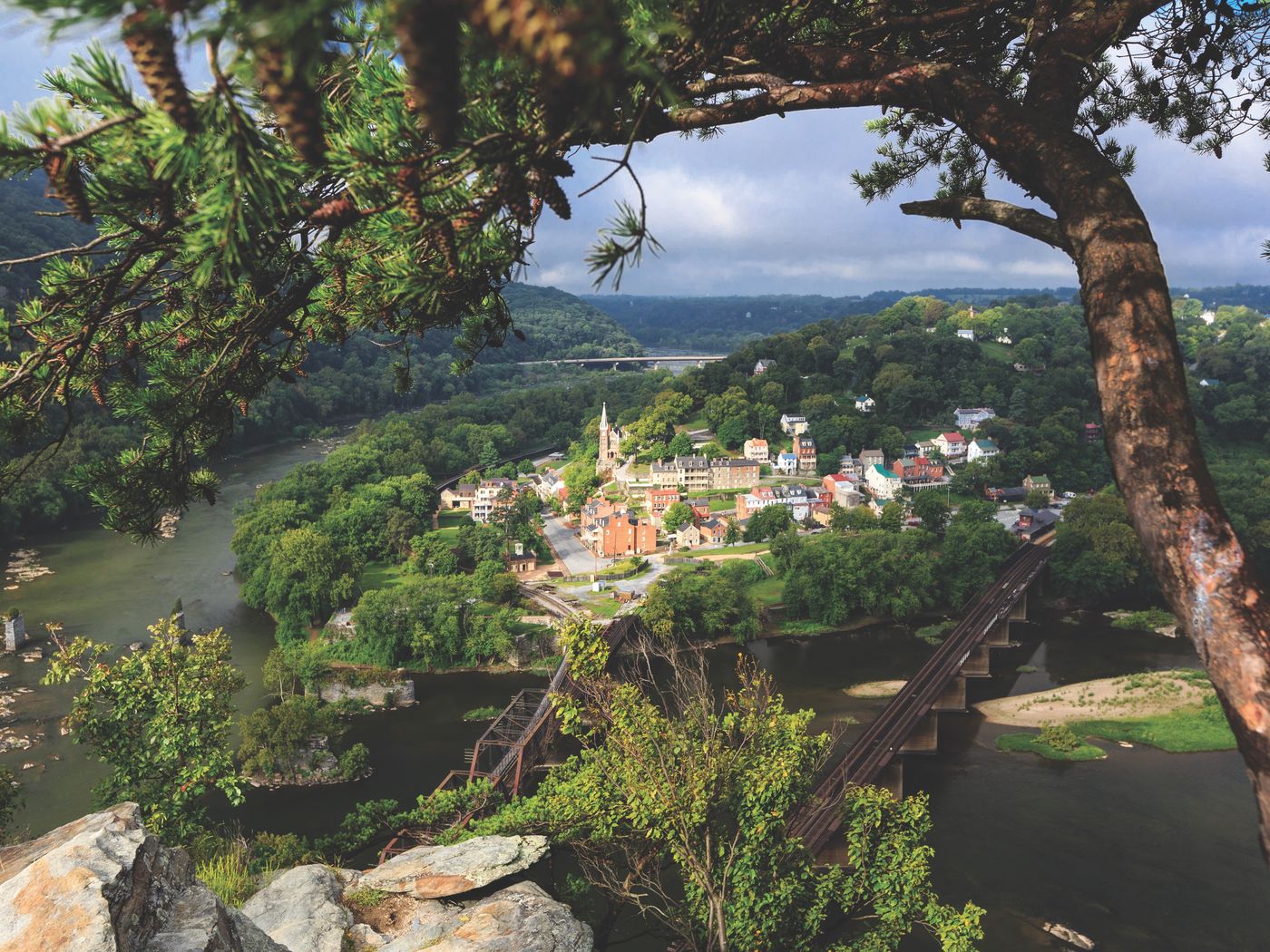 The Mid-Atlantic is a perennial favorite travel destination for many, thanks to its verdant rolling countryside, vibrant urban centers, and biodiverse natural habitats that draw life from the Chesapeake Bay and its tributary waters. Spanning New York to Virginia, the region also enjoys relatively mild year-round weather, and is home to an immense variety of outdoor pursuits. With so much to offer, it’s no wonder the Mid-Atlantic entices so many travelers and admirers each year. And at the heart of it all sits spectacular West Virginia, a hidden gem among the more frequently trafficked states.

But there’s more to the Mid-Atlantic—and to West Virginia in particular—than its lush wilderness, outdoor adventures and small-town charms suggest. The area also played a critical role in America’s founding history, from forming the backbone of commerce and industry, to shaping a culture that still endures in these parts today. Perhaps it’s why American historian and author Frederick Jackson Turner regarded this as “the typically American” region, having influenced the nation’s history to the extent that it’s become part of its very fabric.

One of the best places to experience this founding history up close is in Jefferson County. Set on the fertile lands where the Potomac and Shenandoah Rivers meet beneath the majestic Blue Ridge Mountains, it’s home to a collection of culturally rich towns including Harpers Ferry, Bolivar, Shepherdstown and Charles Town. With bustling shops, first-rate restaurants and active cultural centers, these towns are very much alive and thriving today. But venture back only a few centuries into the past and it’s immediately clear that these West Virginia towns are steeped in the stories of America’s founding. Here are just a few of the historical happenings that occurred in Jefferson County that have shaped the course of the nation’s history.

Jefferson County—and particularly its county seat of Charles Town—can claim extensive ties to the Founding Father and ultimately the first President of the newly formed United States, George Washington, along with his immediate family. In fact, the town itself was named for George’s younger brother, Charles, who founded both the city and the county. And these roots run so deep that the area is still home to six of the Washington family estates today.

The settlement first came about when, in 1786, Charles petitioned the Virginia General Assembly to form a new community, then known as Charlestowne. Upon the Assembly’s approval, Charles set about building the township, setting aside 80 acres of property for the development. Among the early homesteads there, the most notable is Charles’ personal residence that was built in 1780. Known as Happy Retreat, the Federal/Greek Revival-style estate has been carefully restored and is now the home of a non-profit membership organization that’s dedicated to preserving the town’s history, heritage tourism, scholarship and culture.

Nearby, another of George Washington’s younger brothers, Samuel, built a home known as Harewood. The stately building, completed in 1770, is believed to have been designed by well-respected Colonial architect John Ariss (also sometimes spelled Ayres), and it was constructed from Jefferson County’s native gray limestone—a mineral choice that lent the home structural integrity while also giving a nod to the natural surrounding elements of the land.

In 1801, Jefferson County was ultimately formed as the new county, giving permanence to the early settlements and estates that had begun to spring up in the region. And while the area has seen much growth in the centuries since, many streets that traverse the county, such as George Street and Washington Street, are still occupied by government buildings that harken back to their founding days.

Throughout the early 19th century, bustling Harpers Ferry had become a major hub for travelers and traders in the Mid-Atlantic region. Its smart position—hugging the hills above the confluence of two prominent rivers, the Potomac and the Shenandoah—gave it an ideal vantage point overlooking the sweeping landscape in the shadow of the Blue Ridge Mountains below.

With its easy access to both railroad and canal transportation, the town was not only an important stop along many key travel and trade routes, but it also cemented Harpers Ferry as a strategically important location in the Civil War. In fact, in a bit of prescient planning, George Washington himself had identified the advantageous location of Harpers Ferry back in 1794, and chose to build the United States Armory and Arsenal there.

Bolstering Harpers Ferry’s success, the C&O Canal was a particular feat of transportation ingenuity in these parts. Spanning a little over 184 miles from Cumberland, Maryland to the northwest, and winding its way down to Georgetown in Washington D.C., the route once known as the Chesapeake and Ohio Canal followed along the Potomac River, passing right by Harpers Ferry.

In operation from 1831 until 1924, it used a clever towpath system that allowed traders and transporters to guide cargo, such as coal, lumber and agricultural products, safely along the canal. Today, the original locks and houses along the route—while unused—remain as a reminder of the industrial age. And a well-maintained gravel path provides an ideal surface for runners, cyclists, and even history buffs who enjoy tracing such historical landmarks on foot.

Also important to the growth of Jefferson County, the Baltimore & Ohio Railroad—also known as the B&O—became the backbone for Mid-Atlantic transportation, with Harpers Ferry again serving as a major junction in the Shenandoah Valley. Founded in 1827 and in operation in stages in the ensuing years, the railroad was eventually operational in 13 states, and was able to travel across the Potomac River for 23 years prior to the eruption of the Civil War.

By 1861, the stately wood-covered B&O Bridge had become a critical connector between the Union and Confederacy, and the structure paid for this right: in the years of conflict that followed, the bridge would ultimately be destroyed (from combinations of battle activity, floods, fires and more) and then rebuilt a total of nine times—a testament to the resilience of this region. Finally, in a move that would have great significance to the outcome of the war, the Union army used the bridge during the Valley Campaign in 1864, carrying sorely needed supplies that would ultimately help them to defeat the Confederacy once and for all.

As the backdrop to so many significant Civil War moments, Jefferson County is still riddled with monuments and other remnants to the important figures who once lived, fought or journeyed across its lands. Among the most consequential of these figures is the abolitionist, John Brown. On October 16, 1859, Brown acted upon his desire to end slavery by leading an attack on the United States Armory and Arsenal at Harpers Ferry.

While Brown was ultimately unsuccessful in his immediate mission—within 36 hours, a company of Marines under the direction of Robert E. Lee had stormed the Armory and overtaken Brown and his associates—one could argue that the history books regard Brown’s crusade as a success. His attempt failed, but his raid set the stage for what would be the heart of the Civil War conflict. Brown generated an irreversible momentum and, as a result, helped alter the course of American history.

In what would become one of the most infamous trials in the nation’s founding history, Brown was convicted and sentenced at the Charles Town courthouse. Today, visitors can explore many relics from the trial itself, such as Brown’s jail cell desk and other memorabilia, all on view at the Jefferson County Museum in downtown Charles Town. For visitors and history buffs with a bit more time to explore, a Historic Charles Town Walking Tour is a must. These routes will uncover even more important historical spots relevant to the trial, such as the original trial site, and the site of Brown’s eventual execution.

It’s impossible to overstate Harpers Ferry’s relevance to the Civil War. Trapped in the Shenandoah Valley on the border between North and South, the junction changed hands eight times during the war, and was the unfortunate host of many repeated battles. Here occurred one of the most significant engagements of the Civil War, where Confederate General “Stonewall” Jackson forced the surrender of over 12,000 Union troops in the Battle of Harpers Ferry.

To be sure, with its central and strategic location, this would not be the only significant Civil War conflict of great consequence here. Harpers Ferry was also home to several raids by Colonel John Singleton Mosby, a Confederate cavalry commander whose guerilla tactics so surprised and terrorized his enemies that he was given the nickname the “Gray Ghost.” And in the Battle of Shepherdstown, fought on September 19-20, 1862, Jefferson County in particular (and what would later become the state West Virginia overall) saw its bloodiest battle of the war. While not among the more well-cataloged battles in Civil War history, it had important consequences as it saw the end of Robert E. Lee’s first invasion of the north—a pivotal moment in evolving the military strategies on both sides.

In nearby Charles Town, the Jefferson County Courthouse was gravely damaged by artillery fire during the war, though despite the damage, it found a new wartime purpose as a horse stable. Such Civil War history comes alive in this and many other ways throughout Jefferson County, where historical markers abound around every corner. Some mark key moments in the fight, such as when and where General Early faced General Sheridan in the Battle of Summit Point, or in the Battle of Smithfield. Others mark smaller but no less significant moments that helped to shape American history. Today, visitors to Jefferson County can explore a vast collection of monuments and sites along the Civil War Trail—a national network that contains more than 300 historical sites from the years of conflict.

While it’s impossible to discount the impact that the Civil War has had on the Mid-Atlantic towns of Jefferson County, the area is also home to many important moments from the war’s aftermath. In particular, Harpers Ferry was once the refuge point for thousands of formerly enslaved individuals who sought safety behind Union lines. As a result, once the war concluded, the Shenandoah Valley was home to over 30,000 newly freed people who began their new lives beyond the bonds of slavery.

A common thread among the nearly four million freed after the end of the Civil War and the ratification of the 13th Amendment was a desire to obtain an education. Upon the war’s conclusion, Freewill Baptist missionaries from Maine headed south to promote education, establishing the Lockwood House in Harpers Ferry as the first schoolhouse for the newly freed men and women in Jefferson County. Over time, the schoolhouse transformed into Storer College, the first institution of higher learning in the state of West Virginia for African Americans. The school survived Jim Crow laws and segregation, and in the summer of 1906, it was chosen to host the second conference of the Niagara Movement where activist W.E.B. Dubois proclaimed one of America’s loftiest calls for civil rights. This initial gathering is credited with having laid the foundation for the NAACP, later formed in 1909.

Throughout Jefferson County, African-American history abounds with important markers of freedom in the wake of the Civil War. From Harpers Ferry and Bolivar to Shepherdstown and Charles Town, and in all of the verdant countryside in between, visitors today can experience the rich history of Jefferson County—an immensely important part of the nation’s founding history, and a hidden gem among the magnificent Mid-Atlantic region.