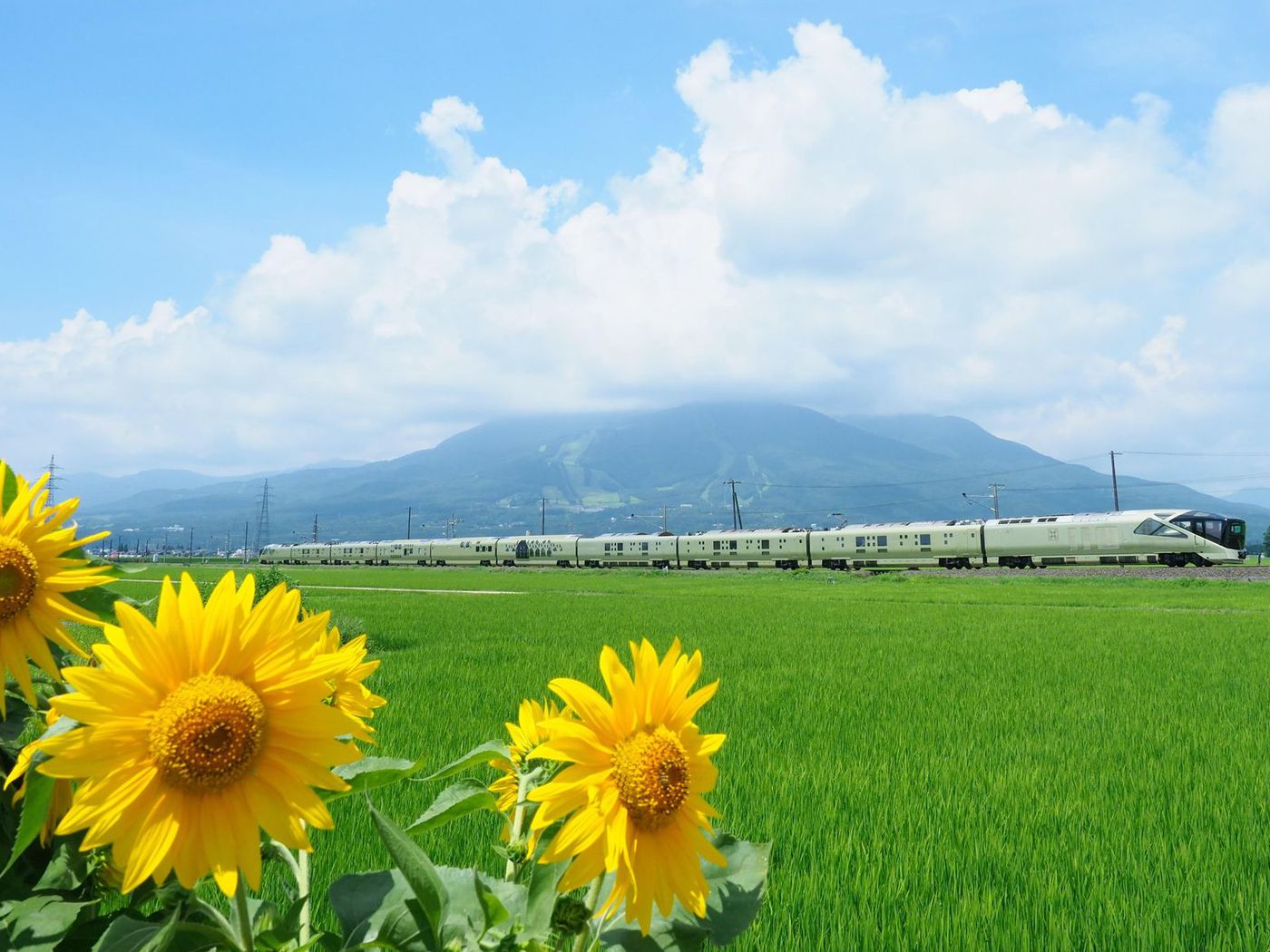 Japan’s railways connect locals and tourists alike to the country’s most popular destination—whether you’re looking to explore urban centers, ski resorts or seaside fishing towns, there’s a train to take you there. And for many fans of train travel, the country’s high-speed bullet trains are an attraction all their own. From fine dining to modern art, Japan’s trains are incorporating elements of culture into the rides.

If you’re going to the central or northern regions of Japan, we’ve rounded up five trains that make the journey just as exciting as the destination.

While Japan may be best known for its bullet trains, Train Suite Shiki-shima is all about world-class luxury and striking design. This overnight train features deluxe, spacious living quarters outfitted with lofted ceilings, and some, with private cypress bathtubs and glowing electric fireplaces. Two observation cars lined with specially contoured windows and skylights offer passengers unparalleled views of the passing scenery, and hand-made, luxury carpets line the floor resembling moss. The lounge car, designed with striking wall patterns evoking a tranquil forest, features a piano and unique artwork from each region of eastern Japan.

The three-day/two-night winter trip (the details of the course for 2020 are now in planning) takes passengers on a journey through breathtaking snowy landscapes. This winter's trip makes stops at hot springs, artisan workshops and the Sekinoichi Sake Brewery, among other sightseeing destinations. Along the way, guests savor meals prepared by chefs steeped in the traditions and flavors of each region. Due to the limited number of suites, this very popular and exclusive trip can only be booked through an application process where each year travelers are selected in a draw.

This classic train runs between Nagano, home of the Zenkoji Templa, and Karuizawa, a resort town known for beautiful forests, hot springs and outdoor recreation. The lounge features wood finishes and large picture windows, and the dining car serves local cuisine made from ingredients sourced in the Shinshu mountains. Chefs from acclaimed local restaurants craft each meal, and a variety of drinks, including wine, cider and sake, are suggested to match each dish.

Reservations can be made online.

You’re guaranteed to eat tons of amazing food on a trip to Japan, but on the Tohoku Emotion, which runs between Hachinohe (in Aomori prefecture) and Kuji (in Iwate Prefecture), the fine dining happens as the train is moving. Seven rooms aboard the train are decorated with sashiko ori wall fabric, made in the Fukushima tradition, while tables set with real linens and dishware elevate the typical train dining experience. The kitchen has its own separate car, and it’s open, meaning travelers can watch chefs prepare their gourmet meals.

Hachinohe sits on the northern tip of Japan facing the Pacific Ocean, where visitors can tour the medieval ruins of Ne Castle and shop for Yawata-uma figurines, which depict horses used by residents of Hachinohe in festivals and local mythology. Kuji, about an hour south of Hachinohe on the coast, is the gateway to the many historical sites of Iwate Prefecture. Hiraizumi, a UNESCO World Heritage site, includes a gold-leaf covered Buddhist temple and a number of sites that depict life in Japan during the 11th century. Iwate is also a must-visit for food and drink lovers—the region is home to some of Japan’s most celebrated Wagyu beff and sake.

The SL Ginga travels between Hanamaki and Kamaishi stations, both in Iwate Prefecture, but it also travels through time. A restored locomotive from the 1920s, the train honors the life and work of Kenji Miyazawa, a beloved poet and children’s book author of the 1910s and 1920s. Inspired by Miyazawa’s Night on the Galactic Railroad, the steam engine train cars have been restored to their ‘20s glory, and are accented with stained glass windows depicting scenes from Miyazawa’s work. The showpiece of the ride is its digital planetarium—the only train planetarium in the world, and one where travelers can take in scenes of the moon and the stars as they move throughout Iwate.

In Kamaishi, visitors can take in the region’s coastal beauty while learning about traditional iron and lacquerware handicrafts. It’s also home to a number of historic sites, including Hiraizumi, which during the medieval period was its own unique kingdom. Hanamaki is world-famous for its hot springs, including Osawa Onsen, which sits on the banks of Toyosawa River and allows bathers to take in the sights and sounds of the outdoors while soaking in restorative waters. Hanamaki is also the birthplace of Miyazawa, and for decades visitors to the area have made pilgrimages to the local museum dedicated to his art.

This train isn’t just the best way to get from Echigo-Yuzawa to Niigata, both in Niigata Prefecture. It’s also the best way to see some of Japan’s most exciting contemporary art, and to experience the fun of being aboard a moving art museum.

Each car is filled with art designed specially for the train by some of the country’s most prominent artists. One car is lined with mirrors, so as the train speeds across Niigata travelers see the country reflected back at them. Another is lined with photographs of K2, one of the world’s steepest mountains. A special kid’s car uses train tracks to make an interactive space for imaginative play, while in the dining car, thirsty visitors can sample Tsubame Coffee, a popular local treat.

Echigo-Yuzawa, just an hour away from Tokyo by train, combines hot springs and ski slopes to become the ultimate winter destination. Nearly six million skiers visit each year, taking advantage of nearly 20 ski fields and outdoor hot tubs. Inside the station itself is a must-visit stop for sake drinkers: Ponshukan, a museum devoted to the beloved beverage where more than 100 varieties of sake are on offer.

Niigata, which sits on the edge of the Sea of Japan, is a destination for anyone interested in the sea itself. It offers surfing and incredible panoramic views of the water, plus the Marinepia Nihonkai Aquarium, home to more than 20,000 different kinds of marine life. At the Northern Culture Museum, visitors can learn about the history of this part of Japan, and ferries depart regularly for nearby Sado Island.