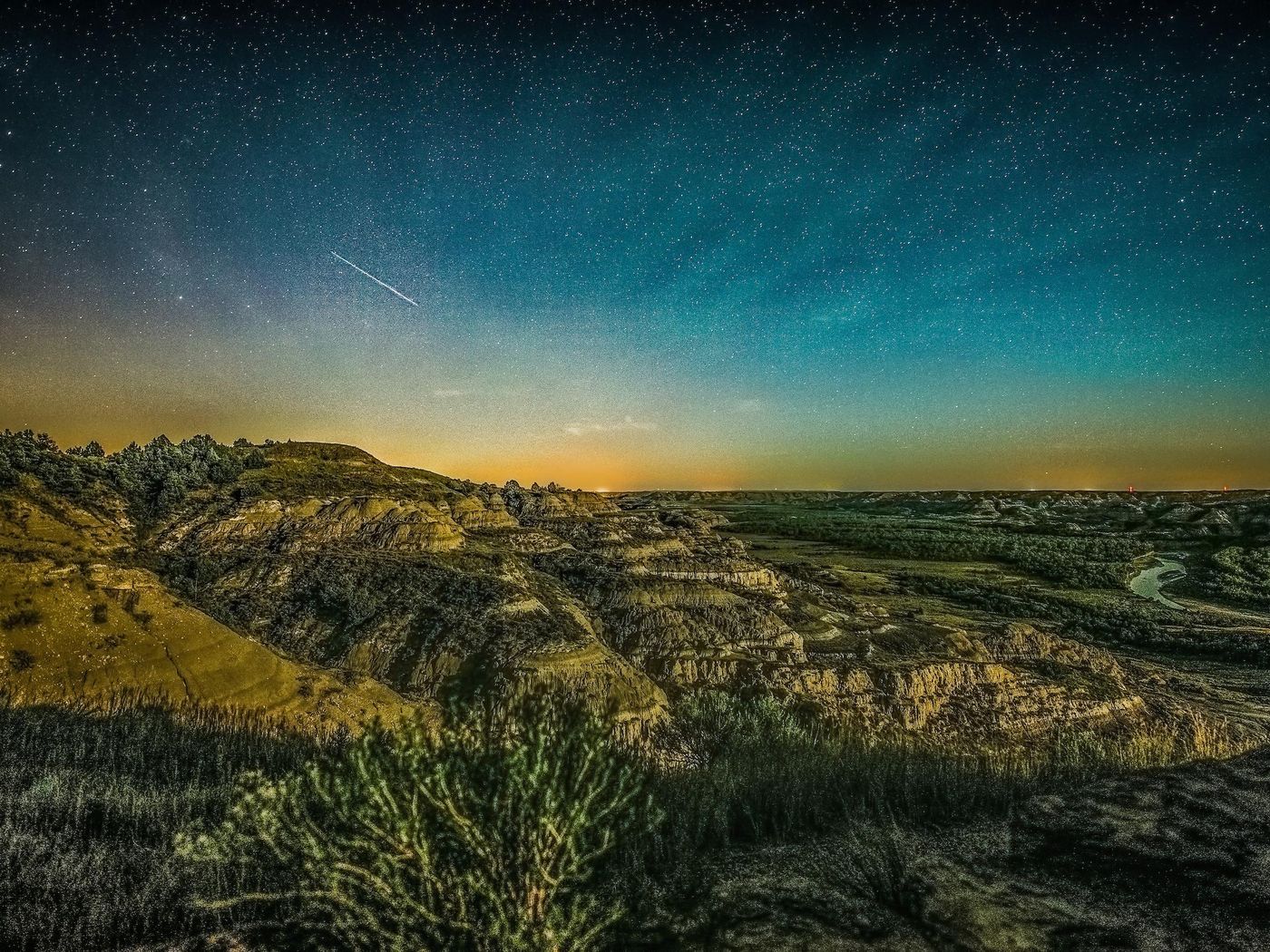 The vastness of North Dakota is impressive. Stretching 340 miles along the nation's northern border, a road trip across the state brings you through fertile river valleys in the east, across expansive prairies, over rolling hills and finally to the renowned brightly-colored buttes of the western Badlands. Home to expansive parks and 63 wildlife refuges the most of any state in the nation - bison, wild horses, moose, elk and big horn sheep still roam the Badlands, and thousands of waterfowl and sandhill cranes migrate through the Central Flyway each year. The state’s physical beauty and recreational activities will amaze visitors, yet it’s these elements combined with the historical and cultural opportunities that set North Dakota apart.

Archaeological evidence shows the area’s first people hunted and farmed the landscape beginning in 2,000 B.C. Later civilizations, including nomadic groups like the Dakota, Assiniboine and Cheyenne, tracked great herds of bison across the prairies, while agricultural societies, including the Mandan, Hidatsa and Arikara, farmed corn, beans, squash and sunflowers along the Missouri River.

Beginning in the early 19th century, European fur traders and explorers began venturing into the area. Most famously, Lewis and Clark spent 214 days in North Dakota on their two visits to the state, and it was during this time, in a village near present day Washburn, that the famous explorers met Sakakawea.

In the late 19th century, European immigrants, primarily from Scandinavia, flocked to the area with the expansion of the railroad, a route that also brought a young Theodore Roosevelt west for the first time. It is here in the Badlands that, as Roosevelt later wrote, “The romance of my life began.” Returning to the area repeatedly throughout his life, his experience on the frontier as a hunter, rancher and community organizer greatly shaped his thinking on self-reliance and conservation, themes that would influence his political career and the development of the broader environmental movement.

Today, visitors can explore North Dakota’s rich natural and cultural heritage through countless national and state parks, historical sites and festivals. Here are eight places and events to get started.

In 1883, Theodore Roosevelt first ventured to the area now known as North Dakota to hunt bison in the Badlands. Shortly after returning to Washington from his hunting excursion, both Roosevelt's wife and mother died on the same day. Five months later, consumed with grief, Roosevelt sought beauty and solitude in the western lands once again, returning to the Dakota Territories to invest in a cattle operation. Throughout his life, Roosevelt continued his visits to the frontier, ultimately building properties on an expansive, remote ranch named Elkhorn that visitors can still see the remains of today.

Driving along the North Unit, make a stop to see a series of rounded rock balls, called cannonball concretions, to see what millions of years of wind and water erosion can do to a landscape. The South Unit, complete with 36 miles of paved roadways open to vehicles and bikes, provides a great opportunity to see the Park's geological beauty and roaming wildlife. Stop along the way for a 20-minute hike on the Wind Canyon Trail. Climb up through a wind-sculpted canyon for one of the best views of the Little Missouri River.

If you plan your visit in late August, be sure to join astronomers, historians and park rangers for an evening of stargazing at the Dakota Nights Astronomy Festival. Leave your cell phone and flashlight in your tent, and spot meteors while learning how the vast starscape influenced Native American cultures, guided navigators and inspired the modern space race.

For the truly adventurous of heart, check out some, or dare to complete all, of this 144-mile single-track trail stretching through the heart of the Badlands, connecting the North and South units of Theodore Roosevelt National Park. Maah Daah Hey Trail, meaning, "an area that has been around or will be around for a while" in the native language of the Mandan Indians from the area, has become a legend in the mountain biking community, bringing riders from all over America to complete the strenuous multi-day trip. While mountain bikes are not allowed in the National Park, the Maah Daah Hey Trail Association has worked to create a continuous path of single track from north to south bypassing sections of the National Park. The trail offers riders a chance to experience all types of North Dakota landscapes, from grassy flatlands to steep rocky ridges - and be prepared to get wet crossing the Little Missouri River!

Horse enthusiasts complete the trail in a more traditional western way. If a 144-mile adventure sounds a bit too much, don't fret, there are nine smaller trail units of varying sizes and difficulties. Backpackers frequent the area as well, taking advantage of the eleven campsites. Keep your eyes up and follow the turtle shell markers along the trails.

Founded in 1883 along the tracks of the Northern Pacific Railway, Medora was named for the wife of a French nobleman who founded the town, establishing a meat packing plant, a hotel and dry goods stores. Theodore Roosevelt often visited Medora on his trips to his Elkhorn ranch, located 35 miles outside of town.

In the summer months, hungry visitors to the area can experience the popular Pitchfork Steak Fondue, where local chefs skewer generous beef steaks and prepare them to perfection. Steaks are accompanied with beans, baked potatoes, garlic toast, cinnamon donuts and a side of western melodies performed by local musicians.

Cap off an evening in Medora with a visit to the Medora Musical. A self-proclaimed "ode to patriotism and Theodore Roosevelt," the show, which started in 1965, is performed outside in the 2,900-seat Burning Hills Amphitheatre. Musical acts and a rotation of variety acts entertain guests under the North Dakota stars. Each show features seven live horses. Giddy Up!

The area was settled on the banks of the Missouri River by the Mandan Indians. At its height, it’s estimated the village had as many as 75 earth lodges and 1,000 residents. On his famous expedition, William Clark came across the Mandan settlement in 1804. In 1872, the U.S. military established Fort Abraham Lincoln Post at the site to serve as a base of operations for conflicts in the area. Seventy-eight permanent structures were constructed at the fort including a post office, barracks, bakery and hospital. Lieutenant Colonel George A. Custer served as the fort’s post commander beginning in 1873, and visitors can take a guided tour of the house he shared with his wife, Libbie. It was from here that he departed with troops for the Great Sioux War of 1876 that eventually led to his defeat and death at the Battle of the Little Bighorn in June of that year. The post was abandoned in 1891 and designated as North Dakota’s first state park in 1907.

Visitors today can experience a glimpse of life as it was during the time the Mandan Indians inhabited the land. Five earth lodges have been recreated on site, and the park service offers interpretive tours on Mandan Indian culture.

Held in the fall on the North Dakota State Fairgrounds in Minot, Norsk Høstfest is the largest Scandinavian festival in North America. It celebrates the history and culture of the early settlers from Denmark, Finland, Iceland, Norway and Sweden who made their homes on the American Plains. Founded in 1978, thousands of people from all over the world descend on Minot to eat lutefisk, dance, shop and celebrate Nordic heritage.

More than 1,500 dancers and drummers representing 70 tribes across North America gather in Bismarck every fall to compete against one another. The event draws an audience of roughly 20,000 spectators annually. The United Tribes International Powwow is one of the largest powwows in North America, and it’s known as the Home of the Champions. The weekend long event features native food and crafts. The United Tribes International Powwow will be celebrating its 50th anniversary in 2019.

#7 | The Lewis and Clark Trail

Meriwether Lewis and William Clark visited North Dakota twice on their expedition. The pair set up camp alongside the Mandan Indians near Washburn during the winter of 1804-1805 and spent the cold months making clothing and salt needed for the remainder of their expedition. The group returned to the area after completing their trip to the Pacific. It was on the return trip home that Lewis was accidentally shot during a hunting mission. It took him nearly a month to recover.

Visitors today can trace Lewis and Clark’s path through the state from South Dakota to Montana stopping at numerous historical markers and monuments along the way, including the Knife River Indian Villages National Historical Site and Three Tribes Museum. Visit the Lewis and Clark Interpretive Center in Washburn and get a true feeling of what it was like to venture across North Dakota’s expansive landscape. On display are more than 100 items from their journey, including one of the few air rifles that remains from their journey.

Located in the heart of North Dakota’s capital city, Bismarck, the North Dakota Heritage Center and State Museum is a portal into the past. Visitors can learn about the “Roughrider State” from as early as 600 million years ago to the present. North Dakota’s largest museum celebrates the state’s people and landscapes. The museum expanded in 2014, nearly doubling the size of this already impressive collection of artifacts. The Northern Lights Atrium welcomes visitors, bringing together Native American building elements, with its 20 massive poles reminiscent of an earth lodge, and modern design.

Exhibits rotate frequently, but mastodon and Tyrannosaurus Rex fossils continue to both delight and terrify visitors daily. Admission is free. 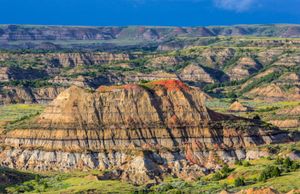