Uncovering the vibrant and complicated history of the formerly French colonial city, once known as “the Paris of the South” 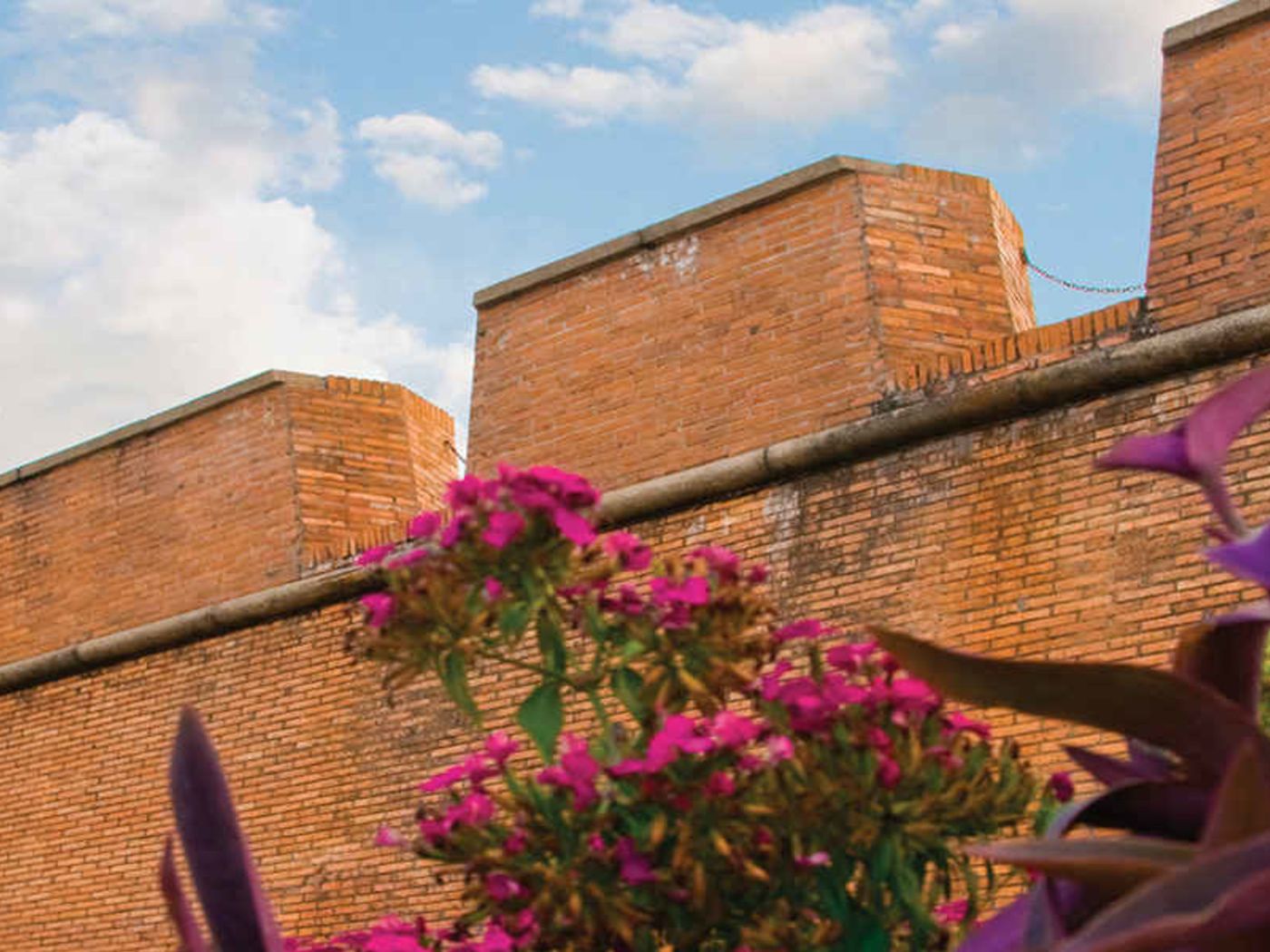 Given the perennial popularity of Mardi Gras in New Orleans, along with its ‘laissez le bon temps rouler’ sensibilities, one could be forgiven for crediting “The Big Easy” as the hub of French colonial culture in America. But just shy of 150 miles to the east along the meandering Gulf Coast, the radiant Port City of Mobile, Alabama has more than a few claims to that fame.

First settled by the French in 1702, Mobile wears its heritage, and its heart, right on its sleeve, boasting rich cultural influences that permeate everything from its architectural stylings to its dynamic culinary and entertainment traditions. And with Spanish, Creole, Catholic, Greek, African and indigenous influences rounding out its French foundations, this eclectic city—Alabama’s oldest—is a veritable melting pot of people, cultures and food today.

“Mobile is a unique place,” explains Chris Andrews, owner of the city’s Bienville Bites Food Tour, which offers guided walking tours through Mobile’s historic downtown food scene. “We’ve had influences from all over the world throughout our history. While the people may change, the influences don’t leave. We’re from all walks of life, and I think that gives us a freedom to be a little bit different.” Indeed, there may be no better way to experience the many distinct forces that have shaped Mobile, than by hitting the streets to see—and taste—your way through it.

Visitors can have their pick of National Register Historic Districts to explore here, with seven in total including Church Street, Lower Dauphin (known familiarly as LoDa), Oakleigh Garden District, Old Dauphin Way, Leinkauf, Ashland Place, and De Tonti Square—each neighborhood evoking the city’s transformation over the 18th and 19th centuries. First-timers should get their bearings with a historic itinerary, beginning at the History Museum of Mobile, with its permanent collection that shines a spotlight on the city’s founding forces, then continuing on to the Colonial Fort Condé. First built by French explorers in 1723, the bastion changed hands numerous times over generations and slowly fell into disrepair, until remnants of the fort were discovered in 1966 and ultimately reconstructed in parts a decade later. Included with the price of admission to the History Museum, visitors can explore the replica fortress up close today, along with the historic battlegrounds of nearby Forts Morgan and Gaines.

Beyond the must-see forts, Mobile’s history comes alive at the University of South Alabama Archeology Museum, offering gallery-goers a peek inside the many Port City influences that shaped the town’s settlement and development over centuries.

“While port cities may not experience the level of immigration they once did, they are welcoming places,” explains Cart Blackwell, Curator of the Mobile Carnival Museum, of the unique forces that fueled the evolution of Gulf Coast communities like this one. “Waves of people, with their respective beliefs and traditions, have shaped Mobile since its beginnings in the early 18th century. The [first] colonial settlers were joined by the same immigrants who shaped America as a whole, and they made the city’s way of life what it is today.”

Among the forces that have influenced Mobile over many generations, the city has a rich African American history that is perhaps most evident today along the significant Dora Franklin Finley African American Heritage Trail. Spanning the city, the trail marks over 40 distinct places and events in the region’s complicated multicultural legacy. Among them, visitors can uncover the once-buried secrets of the Clotilda—the nation’s last illegal slave ship that brought 110 African captives to Mobile in 1860 under the cloak of night, before its operators ultimately burned and sunk the ship to bury the evidence of their illicit operation. With the ship's remains finally located just north of the Mobile Delta in 2019, the long-buried secrets of the Clotilda and her occupants are a recent reminder of a more tenuous truth in America’s founding history. The trail also includes stops in Africatown, a thriving community and “city within a city” that is home to descendants of the Clotilda survivors today.

“Our African American history is unique [among other American cities] in that we get to tell the story of the last African slave ship that entered U.S. soil,” says Andrews. “That’s just an example of how thousands of Mobilians can tell the story to their kids and grandkids about how their families arrived here, worked hard, and persevered. Going back to our founding, every culture has had to work extremely hard just to survive. And I think the common thread throughout all the different influences and cultures is the shared work ethic.”

It’s no surprise that, with such a multicultural heritage and a shared commitment to building something lasting, the arts and cultural scene in Mobile is also alive and thriving. A true artists’ town, Mobile is a hotspot for creators, purveyors and appreciators of all manner of artwork. Stroll along the bustling LoDa Art Walk that takes place every second Friday evening, or pop into your choice of local galleries and public art spaces. Whatever time of year you may visit, the relatively new Sophiella Gallery will likely have a dedicated solo exhibit from a regional artist on display. And don’t miss the Mobile Arts Council’s incredible Gallery @ Room 1927, a dedicated community gallery that features an array of original works by local and regional creators.

Beyond galleries, the Port City is home to a collection of impressive art museums. As the largest such museum along the entire Gulf Coast spanning Tampa to New Orleans, the Mobile Museum of Art has over 6,400 works in its permanent collection. Nearby, the non-profit Alabama Contemporary Art Center has more modern works on display, and a central Cathedral Square location that makes it easy to pair a day at the museum with an evening at the nearby Saenger Theatre, which boasts a packed calendar, from an exquisite ballet to performances by the Mobile Symphony and the Mobile Opera.

“Mobile has so much to offer visitors,” says Blackwell. “Be your interests recreational, artistic, natural, culinary, historical—you name it—Mobile offers an experience like no other.” Indeed, there’s something for everyone in Mobile. But with so much going on here, it’s easy to forget that the vibrant Port City is also the true birthplace of Mardi Gras in America.

“As Mobile’s greatest living tradition, Carnival sustains Mobile’s fine arts, performing arts, decorative arts, and all of its other art forms,” explains Blackwell, “and for a city of Mobile’s size, the number of talented artists is amazing. The parade floats, music, watercolors, invitations, costumes, trains, tableaux, choreographies [and more] that inform Carnival, with Mardi Gras at its height, take months to realize. And as soon as each of these experiences is enjoyed—if not before—the artists behind them are moving on to the next year’s creations.”

Known colloquially in some circles as “the mother of mystics,” the city of Mobile can trace its Carnival roots to having been one of the earliest settlements along the Gulf Coast. As Blackwell explains: “It’s a historical fact that the ingredients of American Carnival were established in Mobile in the 1830s. [One particular] New Years Eve, a group of Mobile men were enjoying a night on the waterfront. On their way home, several of these chaps were walking past Partridge Hardware. Absconding with some cowbells and rakes, these guys started marching down the street, proclaiming themselves the ‘Cowbellion de Rakin Society.’ Over the course of the ensuing year, they worked toward a full-blown parade with a ball thereafter. The parade was informed by a prevailing theme, and manned by members of the society wearing costumes and masks, to the delight of people lining the street. The invitation-only ball carried on the theme [used in] the parade … and there you have it. The ingredients of American Carnival were established in Mobile, and then exported across the Gulf region.”

Outside of Mardi Gras season, adds Andrews, “the most compelling reason to visit Mobile today is the variety of amazing things to do, eat, and learn about. Not only can you explore the city and find over 300 years of history, but you’ll also see influences from French, British and Spanish culture that still impact our food, architecture, and people along the Gulf Coast.”

Perhaps nowhere is this melting pot of influences more evident than at the dining table. Home to a rich culinary culture that’s been cultivated over centuries, food here includes everything from indigenous food staples to European and African cooking techniques and ingredients. Day after day, Mobile serves up a variety of fresh-caught fare that feels quintessentially southern—and yet unlike anything else. The city has a cuisine all its own.

“There’s no better place to be hungry than in Mobile,” quips Andrews. “A good cup of seafood gumbo with fresh Gulf seafood, like shrimp and crab, always hits the spot.” As do oysters, a defining food on the Mobile culinary scene that predates even its French founding. “Oysters and corn were the main source of diet long before the Europeans arrived in Mobile,” Andrews continues. “We have evidence today of oyster shell mounds in the Mobile-Tensaw Delta, so oysters were also used as an architectural tool. Our first roads were made of oyster shells, building walls were plastered with oyster shells. During the Civil War, starving soldiers even ate a seafood buffet including oysters from our waters. Oysters are just in our blood as Mobilians.”

Whatever your appetite for brackish-water bivalves may be, you’re sure to find a range of culinary delights in these parts. Join in one of Andrews’ Bienville Bites Food Tours to kick off your trip in the most delicious way, sampling your way through culinary delights in the historic downtown. Head to Southern National for a modern take on southern comfort foods and cocktails; nosh on chicken and waffles at the legendary SOCU Southern Kitchen; and duck into The Hummingbird Way for a fresh take on local seafood fare. You’ll never go hungry here.

With its rich multicultural history and dangerously delicious fusion food, Mobile has earned its place on any must-visit list. But it’s the citizens who truly make it a destination like no other. “Mobile is a gracious place, and its people are lovely,” notes Blackwell of the melting pot that is his Gulf Coast home. “It is Mobilians [themselves] who have made and continue to make the Port City so very unique.”