Explore the Heart of the Revolutionary War’s Southern Campaign 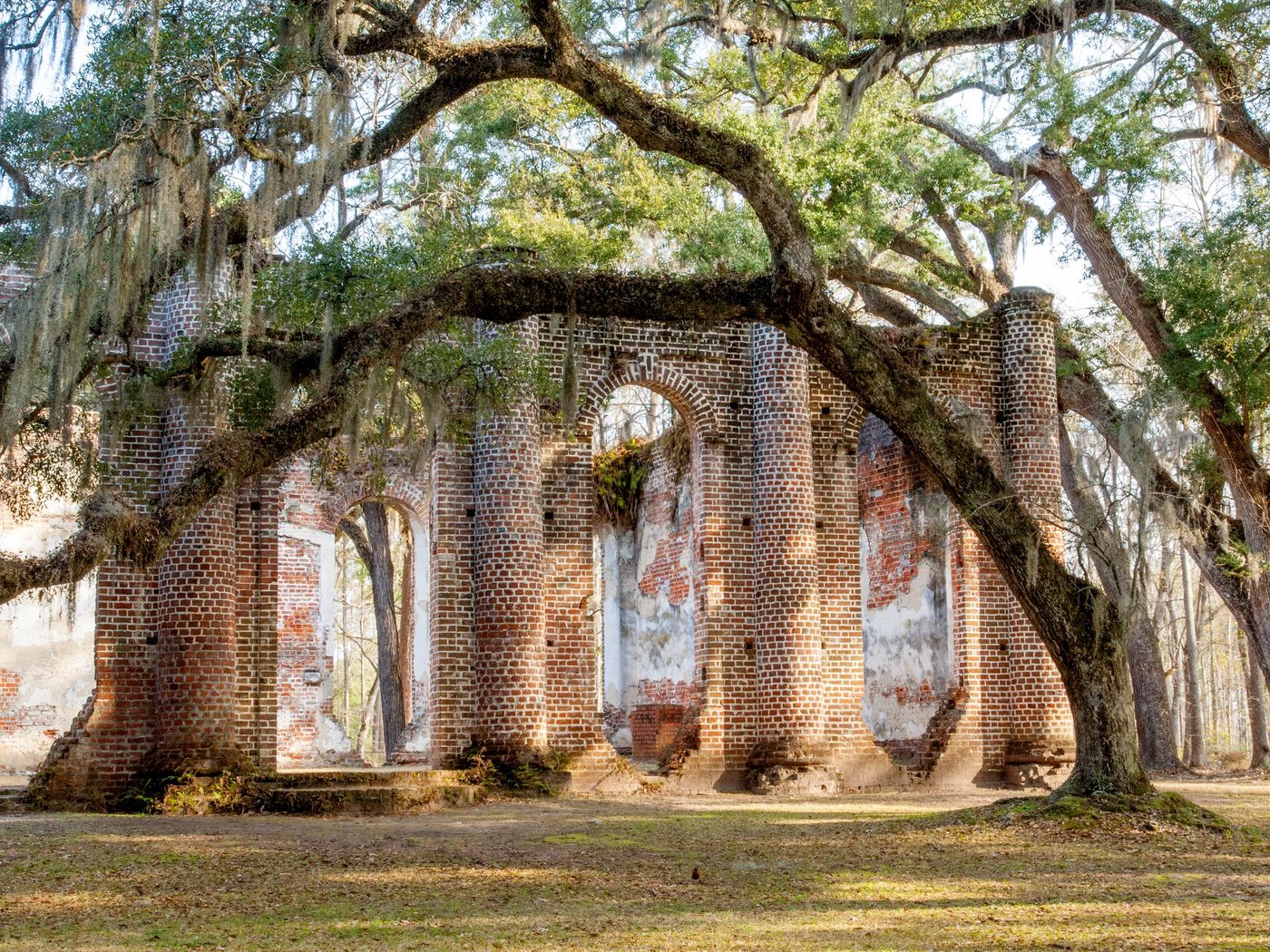 A British ship glided into the Charles Towne Harbor, loaded down with precious cargo—tea, to be drunk by residents of the thirteen colonies, as dependent on the hot drink as their fellow royal subjects across the Atlantic.

But this time, something was different. Increasingly fed up with what they insisted were unfair taxes levied by the British government on the American colonies, local merchants rallied together in protest. Instead of purchasing the tea, they locked it away in the Exchange building.

The Charleston Tea Party happened days before the more famous one in Boston, and though less well remembered, it foreshadowed the pivotal role South Carolina would play in the war's southern theater. Over 200 battles and skirmishes took place in the state over the course of the Revolutionary War, including some of the most important conflicts of the war. Today, these important battles are honored throughout the state with beautifully preserved battlefields and historic ruins, quite gravesites and vibrant living history museums. Here are just a few of the best spots in the state for exploring South Carolina’s Revolutionary-era spirit.

Charleston is filled with Revolutionary-era curiosities, including the Heyward-Washington House, the former home to one of four South Carolina signatories of the Declaration of Independence. Charleston is also where you’ll find the Old Exchange & Provost Dungeon, a meeting place for South Carolina's revolutionary leaders and a storehouse for confiscated British tea. After the British stormed the city in 1780, the basement was converted into a harsh military prison, confining both Colonial prisoners of war and errant British soldiers. After the war, the building served as the site of the 1788 South Carolina convention that would ultimately ratify the United States Constitution. The building is one of only four structures still standing where the nation’s founding document was originally ratified.

Georgetown, about an hour and a half north of Charleston on the coast, was a key port in the operations of General Nathaniel Greene, one of George Washington’s most trusted deputies. Georgetown County was also a key battleground for Francis Marion, nicknamed the “Swamp Fox” by British forces for his craftiness in wreaking havoc on British encampments under the cover of night. Today, sixteen blocks of the downtown area are listed on the National Historic Register, and Swamp Fox Tours offers a 1.5 hour narrated tour of the district's historic sites.

In Yemassee, around 20 miles outside of Beaufort, SC, the Old Sheldon Church was once the first example of Classical Revival architecture in the American colonies. Built with Doric-style Greek columns, the original church was burned by British forces in 1779, and while it was quickly rebuilt, it was destroyed again during the Civil War. Now, the ruins offer a unique opportunity to wander amongst the stones of history, including gravesites and memorials dedicated to famous South Carolinians.

While strolling amongst nearly three miles of nature trails, visitors to the site of the Battle of Musgrove Mill learn about the 1780 clash: 200 Patriots versus nearly twice that number of Loyalists. Outnumbered and trapped by geography, the Patriot militia, hiding in a brush, tricked the Loyalists into attacking first, resulting in a Patriot rout that inspired the tired Americans to keep fighting.

The last major fight of the Carolinas during the American Revolution, the Battle of Eutaw Springs took place on September 8, 1781, when 2,000 troops under Gen. Nathanael Greene's command attacked British forces camped on Eutaw Creek. Although both sides claimed victory, the British took heavy losses, and Greene succeeded in preventing the British troop from joining with forces under Gen. Charles Lord Cornwallis in Virginia, a strategic gain. The battle site is now a park dotted with historic marker telling the story of the engagement. The tomb of British Major John Majoribanks, who fought in the battle, can also be found on the grounds.

In 1780, morale in the Colonies was low—the British were racking up wins, and the American militias were depleted, especially in South Carolina, whose Charleston contingent had been captured by British forces in May. But on July 12 of that year, a small group of South Carolina fighters went on the offense, and a group of backcountry militiamen took on the fearsome General Christian Huck—and won. It was the first major Southern win of the war, and the people of South Carolina were rejuvenated by the victory. Today, visitors can take in Brattonsville’s 775 acres, dotted with 30 historic structures that interpret life in South Carolina during the 18th and 19th centuries.

Although the Battle of Camden itself was a crushing defeat to American fighters, its legacy is an important one. After their defeat at the hands of the British Lt. General Lord Cornwallis, the Continental Army returned to strategizing and made changes in their leadership that historians link directly to their eventual victory. Over 450 acres of battlefield are preserved at Camden, as is the 18th century house of local Joseph Kershaw, which served as Cornwallis’ headquarters after his win during the battle.

More than 30 historic structures make up the Lexington County Museum, where visitors can learn about day-to-day life in backcountry South Carolina in the days of the American Revolution. The museum, which includes the oldest home in Lexington, offers the chance to learn about local furniture and quilt making as well as 18th century production of dairy, honey and other household staples.

Once an overgrown, swampy dumping ground for the city of North Augusta, the Olde Towne Preservation Association transformed the site into the Living History Park of today, where trained historical reenactors invite guests to travel back in time to learn about daily life in the early 18th century. Over 20,000 people visit each year, taking in sites like a greenhouse specializing in 18th century plants and a blacksmithing workshop that demonstrates the art of forging.

Francis Marion, the “Swamp Fox” of South Carolina, was aided in his raids and surprise attacks by the landscape of South Carolina’s rivers, which offered ample camouflage and hiding places. The Revolutionary Rivers Trail invites would-be Swamp Foxes to follow in Marion’s footsteps on paddling tours that take kayakers through Marion’s swamp hideouts, off-roading adventures, and even overnight camping trips.

The Battle of Cowpens, where the Continental Army employed a still-rare "double envelopment" technique, is widely considered a key turning point in the American Revolution, especially in the southern theater. American troops under Gen. Daniel Morgan retreated back to defensive positions along the Broad River before hitting the British troops with attacks on both flanks. The British forces suffered overwhelming losses, with 110 British soldiers killed, compared to just 12 Americans. Walk the trails run by the National Park Service, and stop for a visit at the official museum to see reproductions of Revolutionary-era weapons.

Fought in the fall of 1780, the Battle of Kings Mountain was the only conflict of the American Revolution to be fought entirely by Americans—Patriots versus Royalists. The Patriots won, and Thomas Jefferson called it “the turn of the tide of success.” Established in 1931, the park is part of the Overmountain Victory National Historic Trail, which marks the route of Appalachian Patriots to fighting areas in South Carolina and other parts of the South.

Built as the home of Charles and Mary Moore in 1765, the main house at Walnut Grove was also home to Charles and Mary’s daughter Margaret Kathryn Moore, who in 1767 married the future Gen. Andrew Barry. Kate, as she was known, became a fierce supporter of the Patriot cause, and used her position as lady of the house to spy on Tory troops and offer a meeting place to would-be Patriot fighters.

From the coastal Lowcountry to the Blue Ridge Mountains, historic landmarks tell our nation's origin story across the Palmetto State. Explore these thirteen locations, and many more, and discover South Carolina's pivotal role in the American Revolution.