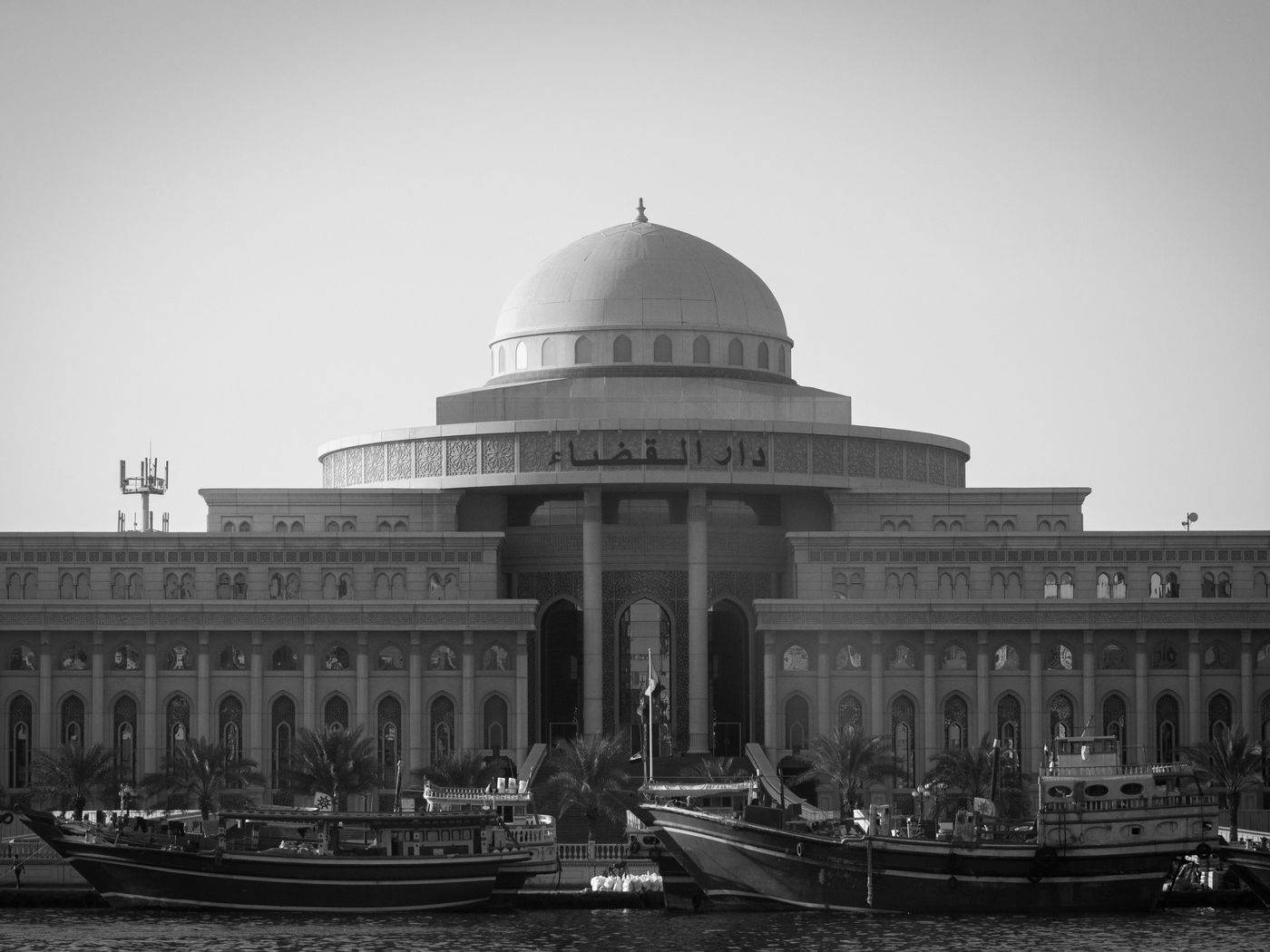 Walking through the alleyways of Al Mureijah Square in old Sharjah, a sense of history overwhelms you. Crenellated parapets checker the sky, and coral stone enclosures flank traditional houses. Here, between the Arabian Sea and the Gulf of Oman, a maritime civilization was born. To the outsider observer, the area looks much the same as it did centuries ago. But inside its whitewashed walls, a creative revolution is taking place.

Since 2013, the area has housed the contemporary art galleries of the Sharjah Art Foundation, which recently featured a retrospective of renowned Emirati artist Hassan Sharif. Behind one discreet gallery door, hundreds of brightly colored foam flip-flops lay heaped in a pile on a bare, gray floor. Behind and to the right, colored strings cascaded down a stark white wall. To the left, bunches of neon pink threads clung together in the shape of a rug.

Known for his weaving assemblages and compilations of found objects, Sharif was a pioneer of contemporary art in the Middle East as well as an advocate for the development of a contemporary arts scene in Sharjah. On view following Sharif's passing in 2016, the exhibition symbolized how far the Sharjah arts scene has come in the space of just a few decades.

When Sharif began his career in the 1970s, Sharjah consisted of a scattered community of artists with very little opportunity for exhibition. However, in 1980, His Highness Sheikh Dr. Sultan Bin Mohammad Al Qasimi, Ruler or Sharjah and a devoted patron of the arts, established the Emirates Fine Arts Society. Offering training and support, the Society attracted creatives from across the UAE. Later in 1993, Al Qasimi founded the Sharjah Biennial, a regional contemporary arts festival. Public art and heritage museums followed, and in 1998 UNESCO named Sharjah the Cultural Capital of the Arab World.

Today, thanks to the vision of Sharjah's leadership paired with the ambition of local artists such as Sharif, Sharjah has solidified its reputation as a bastion of culture in the Middle East. Home to a revamped Sharjah Biennial, 19 museums and the world’s third largest book fair, it is a place where modern expression fuses with Emirati heritage and traditional practices.

Whereas Abu Dhabi and Dubai have invested in headline-grabbing arts developments such as the Louvre Abu Dhabi and Dubai Design District, Sharjah's transformation has come about through more of a grassroots approach. “Sharjah is very home-grown, it’s old school," says Sheikha Hoor Al Qasimi, President and Director of the Sharjah Art Foundation and daughter of the ruler of Sharjah. "[The change has been] not so much from the top down. Here, it’s happened through the people, through the artists.”

The result is a diverse and ever-evolving approach to the arts that ranges from traditional to strikingly contemporary. Here are four ways to dive in.

Hoor Al Qasimi has led the charge in bringing the Sharjah Biennial to new, international audiences over the past decade. Inspired by Germany’s Documenta 11, in 2003 she did away with Sharjah Biennial's national pavilion structure, which organized exhibitions by country, turning the attention instead to individual artists and bringing in outside curators. Put on every other year, the internationally acclaimed contemporary art event enriches the cultural landscape of the area with newly commissioned installations and cultural programming. The 14th annual edition, planned for 2019, will explore art’s meaning in a world where “history is increasingly fictionalized.”

In between biennials, the Sharjah Art Foundation organizes exhibitions, workshops and free film screenings and fosters a community by connecting artists with the resources and spaces they need to create. It also hosts the annual March Meeting, during which artists gather to discuss the production and distribution of art. In recognition of Sheikha Hoor Al Qasimi’s significant contributions to the international contemporary art space, the International Biennial Association named her president last September and will move its headquarters to Sharjah.

Last November, the annual fair attracted a record 2.38 million visitors from over 60 countries in addition to some of publishing’s biggest names. The 11-day festival, launched by His Highness Sheikh Dr. Sultan bin Mohammad Al Qasimi in 1982, has grown to be the largest literary festival in the region and the third largest in the world. In light of Sharjah’s efforts to expand access to reading and foster literary creation, UNESCO has named Sharjah the World Book Capital for 2019. As part of the program, this fall Sharjah launched the Sharjah Publishing Company, a first-of-its-kind free trade zone projected to become the regional hub for book publishing.

While it looks to the future, Sharjah simultaneously places great emphasis on preserving its cultural heritage. The city hosts 19 museums focused on themes ranging from calligraphy to maritime history to classic cars. Perhaps the most remarkable collection resides in the Sharjah Museum of Islamic Civilization. Housed in a beautifully converted souq, or indoor market, on the Majarrah Waterfront, the museum holds more than 5,000 artifacts related to Islamic culture, including rare religious texts, historic scientific instruments, pottery, metalwork and textiles. Other popular museums include the Sharjah Art Museum, the UAE’s first public art museum, which features more than 500 works by modern and contemporary Arab artists, and the Sharjah Heritage Museum, which showcases the region’s cultural heritage and customs, including traditional jewelry and art looms.

In addition to museums run by the government, one of Sharjah’s most prolific art collectors, Sultan Sooud Al Qassemi, established the Barjeel Art Foundation in 2010 to share his extensive collection of modern and contemporary Arab art with the public. Through local and international exhibitions, fellowships and publications, he has promoted contemporary Arab artists and developed critical dialogue about the history of Arab art and its place in the broader art world.

In a 2014 interview with Christie’s, Al Qassemi predicted that Arab and Middle Eastern art will in time win new audiences, and is preparing Sharjah for that future. “Even if I don’t like the work,” he said, “I will buy it if I think it is important, so that visitors to the museum that I hope to build one day can have a good understanding of art from the Middle East and the Arab world.” Today, visitors can view rotating exhibits in the Foundation’s gallery or browse over 1,000 works organized by artist, country and medium in the Barjeel’s impressive online database.