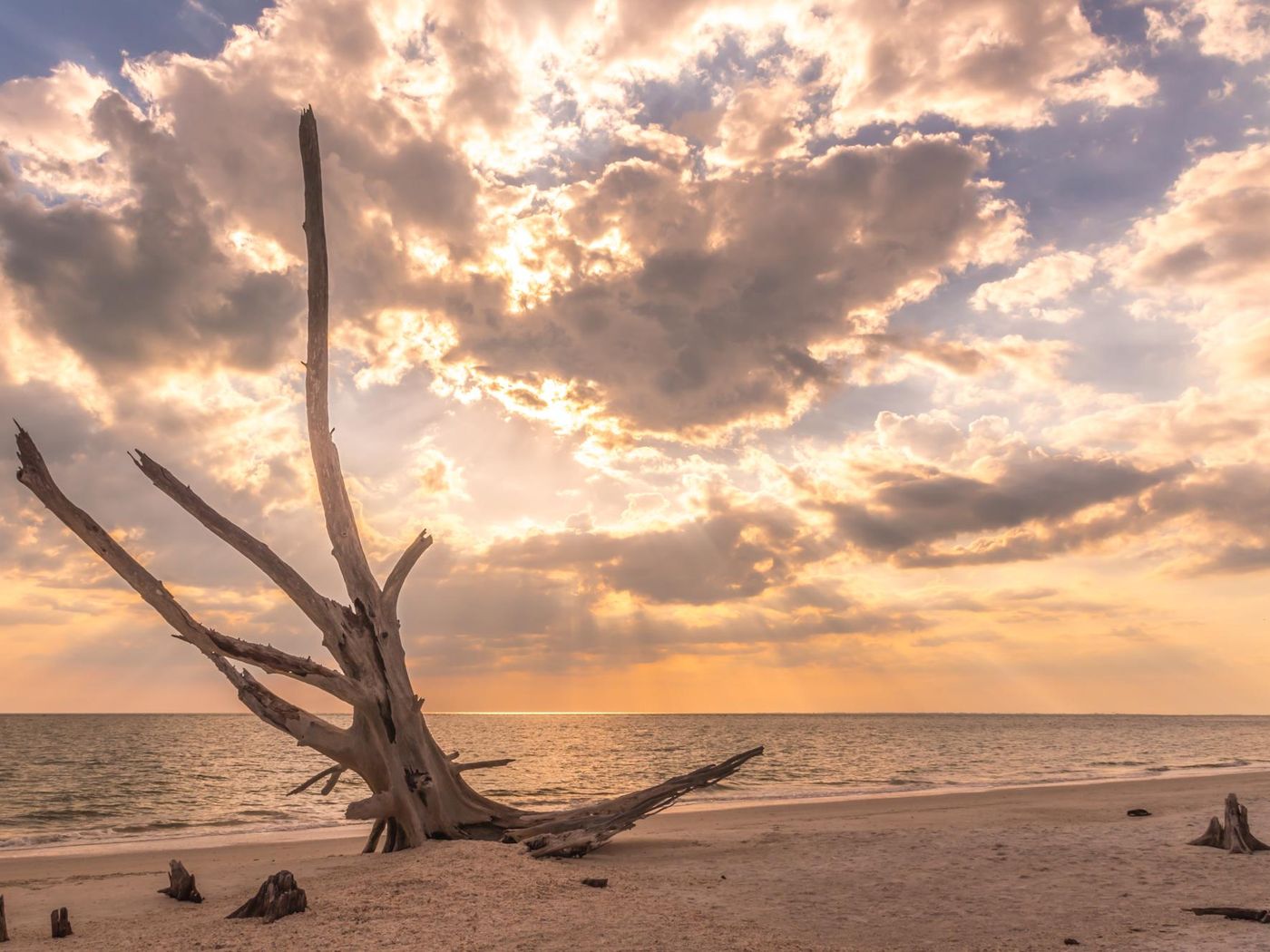 As often as he can, Britt Maxwell likes to head out two hours before sunset to walk the beaches of Fort Myers and Sanibel. One day, the tide might leave ribbons of shells and seaweed on the beach; the next, glistening tidal pools surrounding a sandbar fifty feet out. Roseate spoonbills and other wading birds might swoop in for end-of-day feeding, plucking silver minnows from the shallows, as golfers play their final, seaside rounds. “You just never really know what you're going to find,” he says.

Located off the coast of Southwest Florida, The Beaches of Fort Myers & Sanibel's barrier islands are known around the world for their abundant seashells. With each tide and summer storm, a fresh batch of under-the-sea treasures washes ashore, sand dunes rise and fall and new light dances across the sky. The area is constantly reinventing itself, making it a paradise not only for beachcombers, but photographers as well.

Though Britt has lived and photographed in Fort Myers and Sanibel for over a decade, it never ceases to amaze him. "There’s just so much diversity to be found. Every location’s a little different, but still a little bit the same, and all easily accessible," he says.

Thanks to The Beaches of Fort Myers & Sanibel's Resident Artist Program, in spring 2017 Britt had the opportunity to visit and photograph the many landscapes that comprise the area, from the barrier islands of Captiva and Sanibel to the coastal wetlands of Matlacha and the urban centers of Cape Coral and Fort Myers. Through the experience, he developed a deep appreciation for the destination's distinct beauty.

“The program was a great opportunity to not only share my photos, but also get to explore the area and get out of my normal spots,” he says.

Today, when he's not working at the popular restaurant The Bubble Room on Captiva Island, Britt is chasing end-of-day light. “Nothing can really put a damper on your evening watching the sunset—even getting caught in the rain just feels good—and for a few hours you have no worries," he says. "I try to share those moments in my photography, to give people a little peace and an escape in their lives.”

From small strips of sand in the middle of the Gulf to remote state parks, here are four of Britt's favorite places to witness the everchanging nature of the tropical paradise he calls home.

“Once people get to the causeway, that's when vacation begins,” says Britt. Linking mainland Fort Myers to Sanibel Island, the three-mile Sanibel Causeway is among Britt’s preferred places to chase light. One of the highest points in the county, it offers a panoramic view of the area and is the first chance to “really see Sanibel,” he says. To the right, boats glide in and out of the Sanibel Harbor marina; to the left, over the green-blue waters of San Carlos Bay, a view of Fort Myers Beach with its oceanfront hotels and bustling pier greets you.

In between the two bridge spans are low-lying stretches of road surrounded on either side by beaches, palm trees and mangroves. Britt highly recommends pulling over and walking to the water’s edge. Surrounded by nearly 360 degrees of water, the causeway beaches are an ideal place to capture the many colors of sunrise and sunset. Off the beaches closest to Sanibel, you might even catch a dolphin pod moving swiftly through the water. Britt also recommends heading to the causeway after heavy rains, as passing cars create puddles and pools perfect for experimenting with reflections.

Lovers Key State Park, a secluded barrier island west of Estero and Bonita Springs featuring a two-mile sugar-white beach, is “basically a large sandbar,” says Britt. While today open to the public as part of Lovers Key State Park, up until 1965 the island was accessible only by boat. The story goes that it earned its name because of the lovers that used to sneak away to its shores for some alone time. To access Lovers Key Beach, you can take the tram that runs to and from the park entrance or enjoy a scenic stroll over boardwalks through a maritime hammock.

Britt recommends walking towards the north end of the island in the direction of Fort Myers Beach where whitewashed trees and driftwood rise out of the sand. Framed against a bright blue sky or the warm orange hues of a setting sun, the scene makes for a hauntingly beautiful image regardless of time of day. Often, visitors to the park will loop or string shells onto the branches of the dried wood—almost as ornaments.

The surrounding islands are also worth exploring. Rent a bicycle and disappear into maritime forests on Black Island, or rent a canoe or kayak and glide over green waterways past manatees, dolphins and the occasional alligator while ospreys fly, ever watchful, overhead.

One of the region’s most iconic landmarks, the Sanibel Lighthouse was built in 1884 for cattlemen who hoped it would guide visitors to the island and spark trade. Today, the iron structure stands as a testament to Sanibel’s history. While the lighthouse is closed to the public, the surrounding beach is a popular spot to search for shells, and winding nature trails lead visitors through tall sea grass past marsh rabbits and all manner of sea birds. Britt recommends visiting at low tide and wading into the shallows (being mindful of the current) in order to capture a wide view of the lighthouse. Branches and overgrowth in the surrounding vegetation also offer opportunities to frame the structure in an eye-catching way.

In 2015, Sanibel passed a Dark Skies ordinance, limiting the amount of light visible after sundown to protect turtles and other wildlife. As a result, many photographers now linger at Lighthouse Beach Park late into the evening for the chance to capture images of star clusters. "In just a short amount of time you go from 'I was just shooting birds on the beach' to landscapes or shells and water, the lighthouse, the sunset, and now I’m doing astrophotography—and I haven’t moved a car," says Britt.

Fort Myers Beach, which stretches for seven breathtaking miles along the Gulf and is home to many hotels and resorts, is as quiet or as lively as you want to make it. Every Friday and Saturday by the pier, a sunset celebration with live music and occasional fire twirlers takes place near a shopping and dining area known as Times Square. However, just by walking a short distance, you can find yourself alone to “enjoy the sunset and escape reality," says Britt. Whether capturing the silhouettes of revelers on a warm summer evening, fishermen patiently minding their poles or dark clouds breaking above the pier after a rain storm, photographing Fort Myers Beach rarely disappoints.