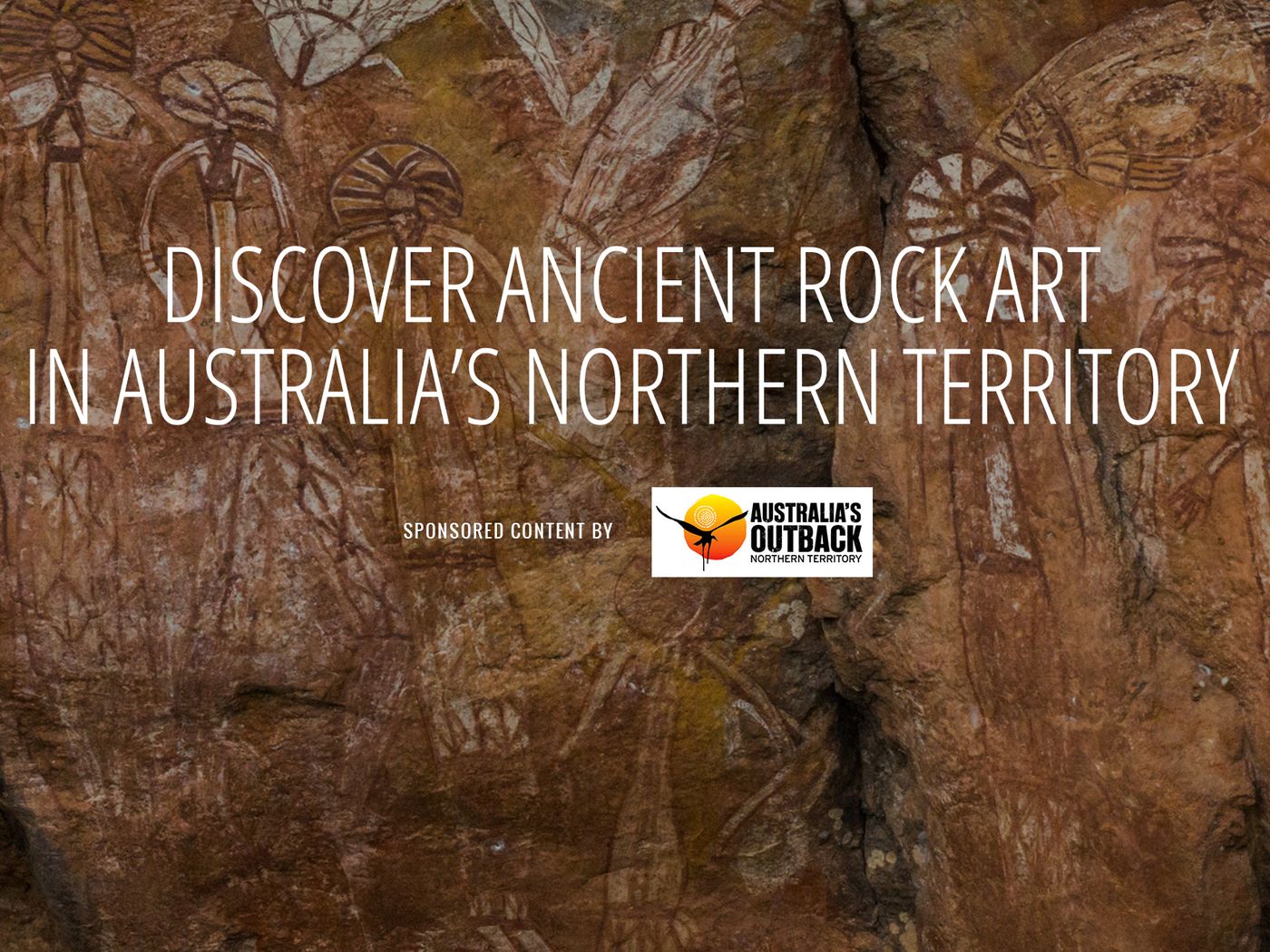 According to Aboriginal belief, ancestral spirits assumed human forms thousands of years ago to create the world and Australia as we know it. Applying red, yellow, white and black pigments to rock, indigenous Australians began recording tales of this creation period, known as the "Dreamtime," as early as 50,000 years ago. Over time, they illustrated everything from hunting methods to laws and ceremonies to early contact with Europeans as a means of imparting knowledge to future generations. Today, these ancient canvases represent some of the oldest and longest running historical records of any group of people in the world.

Thanks to conservation efforts, many of these ancient rock paintings have been preserved and are open to the public in Australia's Northern Territory, offering a rare connection to one of the world's oldest living cultures. At each site, subjects can range from ancestral spirits to now-extinct animals, like the Tasmanian tiger. Often overlapping with newer figures layered on older images, these paintings transport visitors into not one, but multiple worlds and time periods.

See works up close and listen to Aboriginal traditional owners recount stories handed down through millennia at these six historic locations:

Located three hours east of the tropical city of Darwin, Kakadu National Park is the largest national park in Australia. Nourlangie, also known by its indigenous name Burrunggui, is one of the top rock art sites in the country. The site has been occupied by human settlements for more than 50,000 years. A one-mile loop takes visitors through an ancient shelter once used for protection during wet season and past paintings depicting a range of subjects, from ancestral spirits to animals brought by the Europeans.

Featured prominently in the Anbangbang gallery are the creation ancestors Namondjok and Namarrgon. Namarrgon, known as the Lightning Man, heralds the wet season, which typically runs from November through April. Legend has it that Namondjok and Namarrgon, taking the form of short-eared rock wallabies, passed through the area and cut two crevices in the rock that are visible today.

An hour north within the East Alligator region of Kakadu National Park lies a series of rocky outcrops known as Ubirr. The main rock gallery here dates back 1,500 years and is renowned for works featuring "X-ray art," or art depicting the bones and organs of humans and animals.

Like Nourlangie, Ubirr also contains examples of European "contact art," such as a painting of a white man—likely a 19th-century buffalo farmer—with his hands tucked in his trousers. Older paintings, including that of a Rainbow Serpent, speak about ancient law and creation. At both Nourlangie and Ubirr, park rangers give regular talks on Aboriginal art and culture.

To the east of Kakadu National Park is Arnhem Land, an Aboriginal reserve operated by the Yolngu people, the traditional owners of the land. For travelers looking to see rock art, a visit to Injalak Hill is a must. Located in the aboriginal community of Gunbalanya this sandstone monolith consists of five galleries with art that dates back 8,000 years.

Aboriginal guides lead tours lasting three hours. The main gallery is the first on the tour and features layered paintings that reveal facets of three distinct periods in the history of the traditional landowners. Perhaps most notable to visitors are paintings of creation ancestors as well as a murderous evil spirit.

The tropics meet the Outback three hours south of Darwin in Nitmiluk National Park. Home to Katherine Gorge, a network of 13 separate gorges carved by an ancient river, the park leads explorers on winding paths past waterfalls and swimming holes.

On land, the park is home to some of Australia's oldest Aboriginal art. Paintings in all styles appear on sandstone walls throughout the gorge system and along the five-day Jatbula Trail. Believed to date back 40,000 years, paintings here recount Dreamtime creation stories.

Highlights include a site believed to be for women only, as well as the initiation site of a Nipbamjarn boy, both of which can be accessed by helicopter. Stop at the Nitmiluk Visitor Center to learn more about the cultural and spiritual significance of the gorge to the Jawoyn and Dagomen people.

Uluru (Ayers Rock) is one of Australia’s biggest icons. The traditional home of the Anangu people, visitors flock here for breathtaking views of the monolith as sunrise illuminates the rich colors of the Outback. Closer up, the caves of Uluru contain many outstanding examples of historic Aboriginal rock.

While many rock art sites at Uluru are off limits to visitors, there are several sites that can be accessed. Learn about the story of the Mala (rufous hare-wallaby) people on the ranger-guided Mala Walk and pass several rock art shelters on the Kuniya Walk to Mutitjulu Waterhole, where Kuniya and Liru (the python woman and poisonous snake man) helped create Uluru.

From Uluru, SEIT Outback Australia run a day tour to Cave Hill, a remote rock art site in the desert of the Pitjantjatjara Lands owned by the Anangu. The tour is an indigenous cultural experience that will provide you with an insight into many aspects of Aboriginal life, including the role of rock art in society.

Truly off the beaten path, Cave Hill is considered one of the most sacred rock art sites in Australia. On the ceiling of the cave, magnificent paintings illustrate the drama of the Seven Sisters creation story, in which the seven sisters of the constellation Pleiades, fleeing unwanted attention, created Australia's landforms.

Learn more about Aboriginal Rock Art in the Northern Territory.