10 Unexpected Reasons to Make San Antonio Your Next Getaway

In San Antonio, less than 100 miles from the Texas capital of Austin, you’ll find a city filled with hidden treasures and unexpected delights 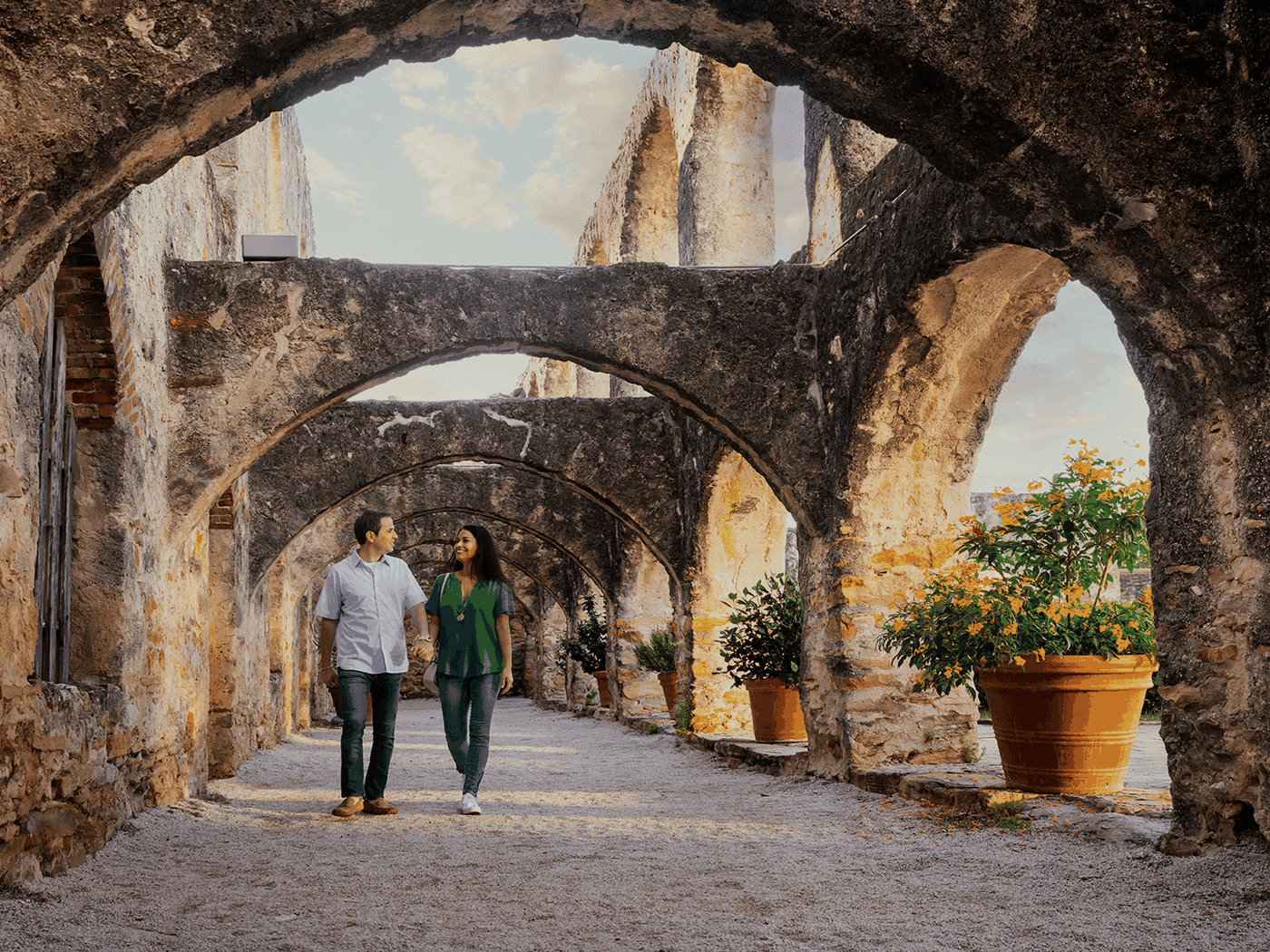 Deep in the heart of Texas, your next vacation awaits. A winding River Walk that passes through some of the oldest colonial structures in North America. Art museums dedicated to the works of modern masters and Native craftsman. Food halls and restaurants so good UNESCO designated the city one of only two American Creative Cities of Gastronomy. In San Antonio, less than 100 miles from the Texas capital of Austin, you’ll find a city filled with hidden treasures and unexpected delights, from magical Día de los Muertos or Day of the Dead celebrations to food that will have you declaring Texas barbecue the best in the world. Here are ten can’t-miss destination experiences that will keep you coming back to San Antonio.

Situated in a former brewing complex on the banks of the San Antonio River, the San Antonio Museum of Art is a sprawling journey through the history of art, from its vast collection of pieces from the Ancient World to exhibitions on abstract paintings by Texas artists. On any given day, visitors to the complex can peruse one of the world’s best collections of Latin American art and an impressive array of ceramics from China, while past shows have focused on subjects as varied as Egyptian animal mummies and Wonder Woman.

Located just north of Downtown San Antonio, Pearl is a do-it-all destination. The building itself was constructed in 1883 as the home of the Pearl Brewing Company, and today it holds a food hall, The Culinary Institute of America, San Antonio, a farmer’s market, and local businesses selling everything from traditional Native American jewelry to books focused on the cultural history of Texas. During the holiday season, Pearl is home to a traditional Posada complete with live mariachi music, and it's a year-round destination for foodies looking to sample Cured’s hand-crafted charcuterie and pickled vegetables, served up by the multiple-James Beard Award nominated chef, Steve McHugh. Pearl is also home to Hotel Emma, a boutique hotel with a cozy lounge bar and rooms overlooking the banks of the San Antonio river.

A San Antonio native, Linda Pace spent decades championing the contemporary art of her native city, and at Ruby City—which is free and open to the public—visitors can wander amongst her massive collection of painting, sculptures, and installations housed in a brand-new building designed by world-renowned architect David Adjaye, who also designed the Smithsonian’s National Museum of African-American History. Also on the grounds of Ruby City is Chris Park, a one-acre urban greenspace, and studios where up-and-coming artists get the chance to showcase their work alongside pieces by art-world luminaries like Ross Bleckner and Marilyn Minter.

A relatively new addition to San Antonio’s cultural landscape (the museum, located inside the city’s former public library headquarters, opened to the public in 2013), the Briscoe Western Art Museum is a dazzling collection of Southwest history. Telling the story of the museum through objects like Pancho Villa’s saddle and an authentic chuck wagon, and a sculpture garden where visitors can walk among figures from the Old West rendered in bronze, the Briscoe is the perfect place for the cowboy-obsessed to learn more about the iconic images of the American west.

Built primarily in the 18th century, San Antonio’s Missions National Historical Park landed a spot on UNESCO’s World Heritage Site list in 2015. The city’s famed River Walk trail connects four of the five missions—Mission San Juan Capistrano, Mission Espada, Mission San Jose, and Mission Concepción. (The fifth and most famous Mission, San Antonio de Valero or the Alamo, is just a short walk away.) Along the way, visitors can check out native plants and artwork commissioned by the city to reflect on the Missions, which offer a unique glimpse into the history of both the Franciscan priests who came to Texas and the Native peoples who called the area home.

San Antonio has long been a destination for delicious eats, and in 2017, UNESCO designated it an official Creative City of Gastronomy—one of just two in the United States, and 26 around the world. While visitors to San Antonio are sure to encounter the area’s legendary Tex-Mex cuisine, many chefs are pioneering what they call ‘Tex-Next’—the future of Mexican-American fusion, drawing on both new techniques and ingredients and traditions that date back thousands of years. In between meals, kick back and relax at one of the more than a dozen craft breweries serving up locally-made ales and pilsners.

The students at the San Antonio location of the Culinary Institute of America—the nation’s premiere culinary school—learn the art of French and Italian cooking like their counterparts in New York and Napa, they also have access to institute’s one-of-a-kind Latin Kitchen, outfitted in traditional Talavera tiles and designed to showcase indoor and outdoor cooking techniques from Latin America. Not ready to sign up for courses? Visitors can make reservations at Savor at Pearl, the CIA’s official San Antonio restaurant, where advanced students cook up dishes like chipotle steak tartare, mussels in Shiner Bock (an iconic Texas beer), and campfire cheesecake with spicy merengue.

One of the oldest residential buildings in Texas (its construction dates to the mid-1740s), the Spanish Governor’s Palace is the one of the last representations of the Presidio San Antonio de Béjar, established by the Spanish government in an attempt to lay claim to what is now the Southwestern United States. During the 1920s the palace was home to, amongst other businesses, a pawn shop, a tire shop, and a produce outlet, and a 1930s-restoration focused on Spanish colonial interiors—it now houses a remarkable collection of Spanish furniture from the 18th and 19th centuries.

Want to learn more about the flora that grows in the nation’s second-largest state? A trip to the San Antonio Botanical Garden is a crash course in Texas plant life—stroll along the Texas Native Trail to see trees, flowers, and greenery that grows in the Texas Hill Country, the East Texas Pineywoods, and San Antonio’s South Texas region. In addition to blue bonnets, mountain laurel, and mesquite trees, the Garden is also home to a number of buildings representing traditional Texas architecture—there’s an authentic East Texas log cabin dating to the 1850s, an 1880s homestead thought to be the largest piñon pine cabin in the state, and a small South Texas adobe house.

Located on the site of the 1968 World's Fair, Hemisfair park is still the place to go for around-the-world culture in San Antonio. Between the Mexican Cultural Institute, which has been showcasing Mexican art for nearly fifty years, the Tower of the Americas, where tourists and locals alike go for jaw-dropping views of the city, and the Institute of Texan Cultures, a museum and library dedicated to the stories of people who call Texas home, it’s the perfect place to spend an afternoon learning about the history of San Antonio and its status as a truly global city. Also located in the park, Yanaguana Garden features family-friendly activities, including a splash pad, sand play area, climbing structures, giant chess, and checker boards. Cool off with an ice pop from Paleteria San Antonio or grab a wood-fired pie at Dough Pizzeria Napoletana – just be sure to save room to let your taste buds explore the dazzling selections of chocolate truffles and hard-to-find and international candy at Chocollazo and Sugar Sugar.