You Can Now Preview the Upcoming Latino Museum 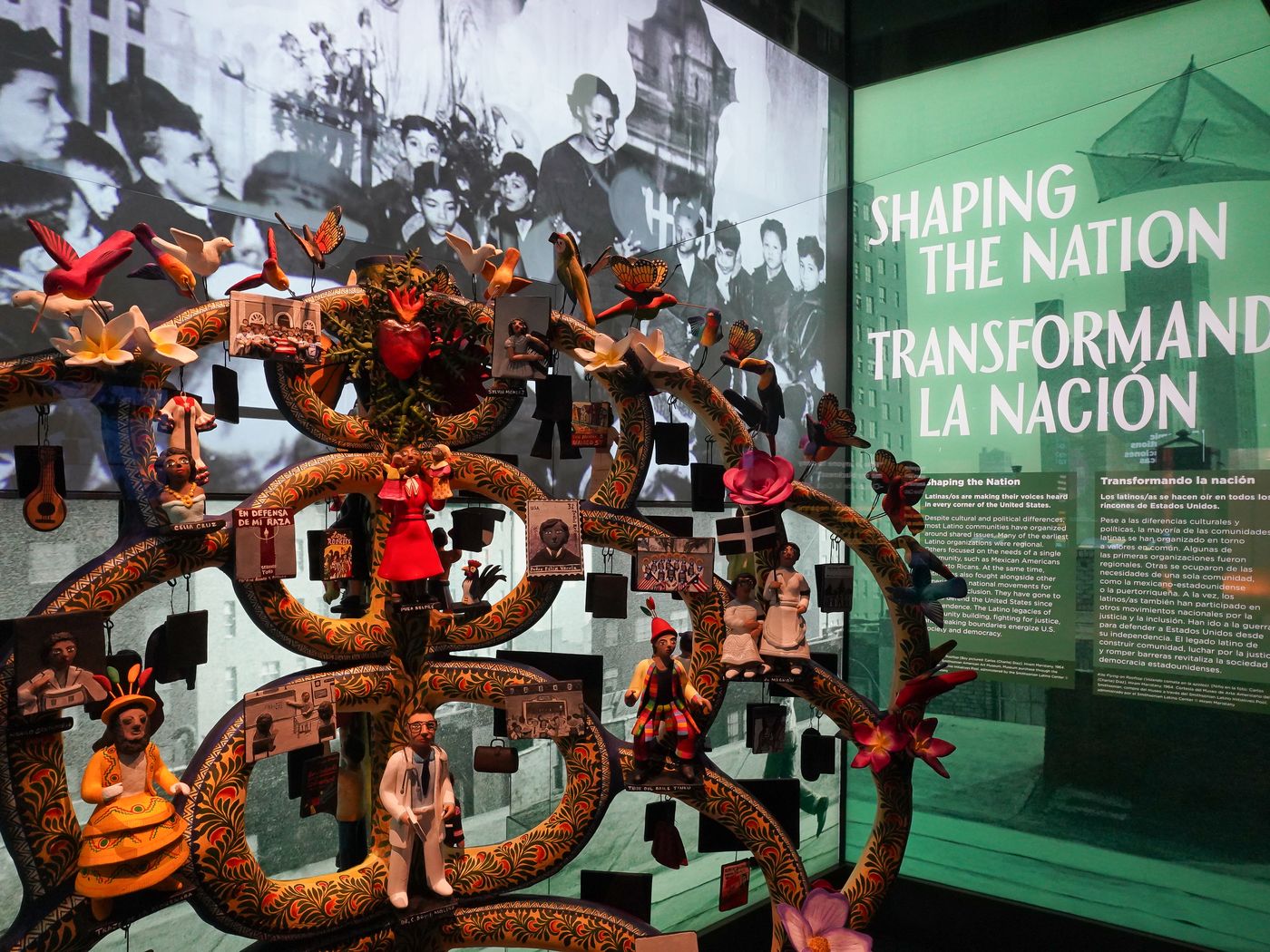 The new Smithsonian show examines the foundational contributions of Latinos in shaping the history and culture of the United States.  NMAL, © Tony Powell

A tiny homemade raft used by two men fleeing Cuba in the 1990s for a better life in America. A rumpled backpack, dusty white sneakers, and an MP3 player, discarded in the desert during a desperate crossing of the U.S.-Mexico border in Arizona. Passports and airplane tickets.

These objects, featured in the exhibition "¡Presente! A Latino History of the United States" and now on view in the Molina Family Latino Gallery at the Smithsonian’s National Museum of American History, represent the immigrant journeys that are most often associated with “Latinos” in the minds of many Americans.

But Latinos and Latinas have been in what is now American territory for hundreds to thousands of years.

“We didn’t cross the border, the border crossed us,” says comedian Cheech Marin, echoing an oft-repeated phrase in the Latino community that refers to the fact that following the Mexican-American War of 1846-48, the U.S. essentially subsumed Northern Mexico—what is now Arizona, California, western Colorado, Nevada, New Mexico, Texas and Utah—into its territory.

Marin appears in the exhibition's 12-minute video Somos by Alberto Ferreras that documents the wide diversity of Latino identities and cultures in America. The video is just one of many myth-busters in ¡Presente!, which begins its storytelling with artifacts and works of art that date to the 17th century and serves as preview to what will eventually become the Smithsonian’s National Museum of the American Latino. “It will take 10 to 12 years to open a museum building,” says the museum’s new director Jorge Zamanillo in a release, “but the gallery gives the public a preview of the museum’s potential.”

The show will be up for at least two-and-a-half years, says curator Ranald Woodaman, who points out that the word Presente translates to here or present, as a declarative roll-call response. The National Museum of the American Latino, along with an American Women’s History Museum, received the blessing of Congress and was signed into law December 27, 2020. The Smithsonian is also tasked with finding appropriate locations for the museums somewhere on or near the National Mall in Washington, D.C., and recently the Institution’s Board of Regents announced that it was looking at four potential sites for both.

While attention is paid to immigration in ¡Presente!, the topic makes for just a small slice of the exhibition’s exhaustive examination of a Latino history inextricably interwoven into the American narrative.

U.S. history doesn’t just take place within the 50 states; it has been shaped by its foreign policy ambitions, its global trade ambitions and its military aspirations, says Woodaman. For that reason, “much of U.S. history actually unfolds in Latin American and Latino spaces,” he says, pointing to the 17th-century story, for instance, of the Tewa leader Po’Pay who organized the Pueblo Revolt of indigenous peoples against Spanish colonizers in 1680. The ambitious show moves through an examination of indigenous cultures and societies, and surveys Spanish and American colonialism and expansionism and its impact on Mexico, Puerto Rico, Haiti, the Dominican Republic, Cuba and, subsequently, addresses Latinos within the story of U.S. slavery and at the intersection of Black history. And finally, the show touches on contemporary issues such as LGBTQ rights and social justice.

The 4,500-square-foot space is chock full of artifacts and stories. There are some 208 objects, says Woodaman.

The artifacts—culled from the Smithsonian collections, borrowed from private individuals and from museums around the globe—are bolstered by opportunities for visitors to go granular, diving into the rabbit hole of their choice through a set of interactive devices bolstered by graphs, illustrations and other data.

One set of displays—connected to “Mapping the U.S. Latino Experience”—challenges patrons to test their knowledge about Latino origins, income inequality, languages spoken by Latinos, how the Covid-19 pandemic affected Latinos and other issues. The responses are cataloged in real-time, allowing the user to click over to a screen to see how his or her answer compares with those of other visitors.

The interactive displays are designed with the latest accessibility technology to meet the needs of all audiences from the cane-detectable edges for people with low vision to the 13 QR codes that link to audible descriptions of the artifacts and a map of the gallery space. Tactile keypads that connect to wired headsets, and handsets mounted on the interactive displays aim to enhance the experience for the sight- and hearing-impaired. All text and audio are presented in English and Spanish. The hope is to make everyone feel welcome.

Woodaman acknowledges the challenges the team faced in showcasing the complexity of Latino diversity. “You have this massive range of different experiences and identities and agendas; and we’re trying to stitch these all together and graft them into this history,” he says.

Some of the stories are firsthand accounts, delivered with video presentations by a dozen individuals at the center of the gallery—an area called El Foro, the Forum, designed to look like a town plaza with benches at one end. Visitors can scroll through the options on the eight-foot-tall “totems” to hear directly from storytellers like Yolanda Leyva, who identifies as Chicana and indigenous, and has created many public history projects that highlight border stories, and Ruby Corado, a Salvadoran immigrant and founder of Casa Ruby, an LGBTQ bilingual support organization in Washington, D.C.

Elsewhere in the gallery are the stories of still other important figures and celebrities like the fashion icons Oscar de la Renta, who was born in the Dominican Republic and Carolina Herrera, a Venezuelan, as well as the Cuban American salsa queen Celia Cruz, the Mexican American union leader César Chávez, the Puerto Rican baseball player Roberto Clemente, and the current Supreme Court Justice Sonia Sotamayor, whose parents were Puerto Rican.

Equally significant are the lesser-known stories of others like Carlos A. Cooks, a Black Dominican immigrant who settled in Harlem, followed the Black Nationalist tenets espoused by Marcus Garvey, and in the 1940s, coined the phrase “Buy Black” to foster economic development; and Pedro Albizu Campos, a lawyer elected to lead the Puerto Rico Nationalist Party in 1930, and who helped start the Puerto Rican independence movement.

Woodaman hopes that the exhibition with its unifying themes will help non-Latino museum visitors to recognize parallels with their own family stories and history; as well as show the history and cultural connections that bind Latinos across a diversity of identities whether they are Puerto Ricans or Columbians or Nicaraguans.

“¡Presente! A Latino History of the United States” is on view in the Molina Family Latino Gallery at the National Museum of American History. A companion website includes oral histories, objects rendered in 3D and other stories from the exhibition.