The story of Evette Peters is bolstered by the Anacostia Community Museum’s research into Washington D.C.’s local neighborhoods and urban waterways 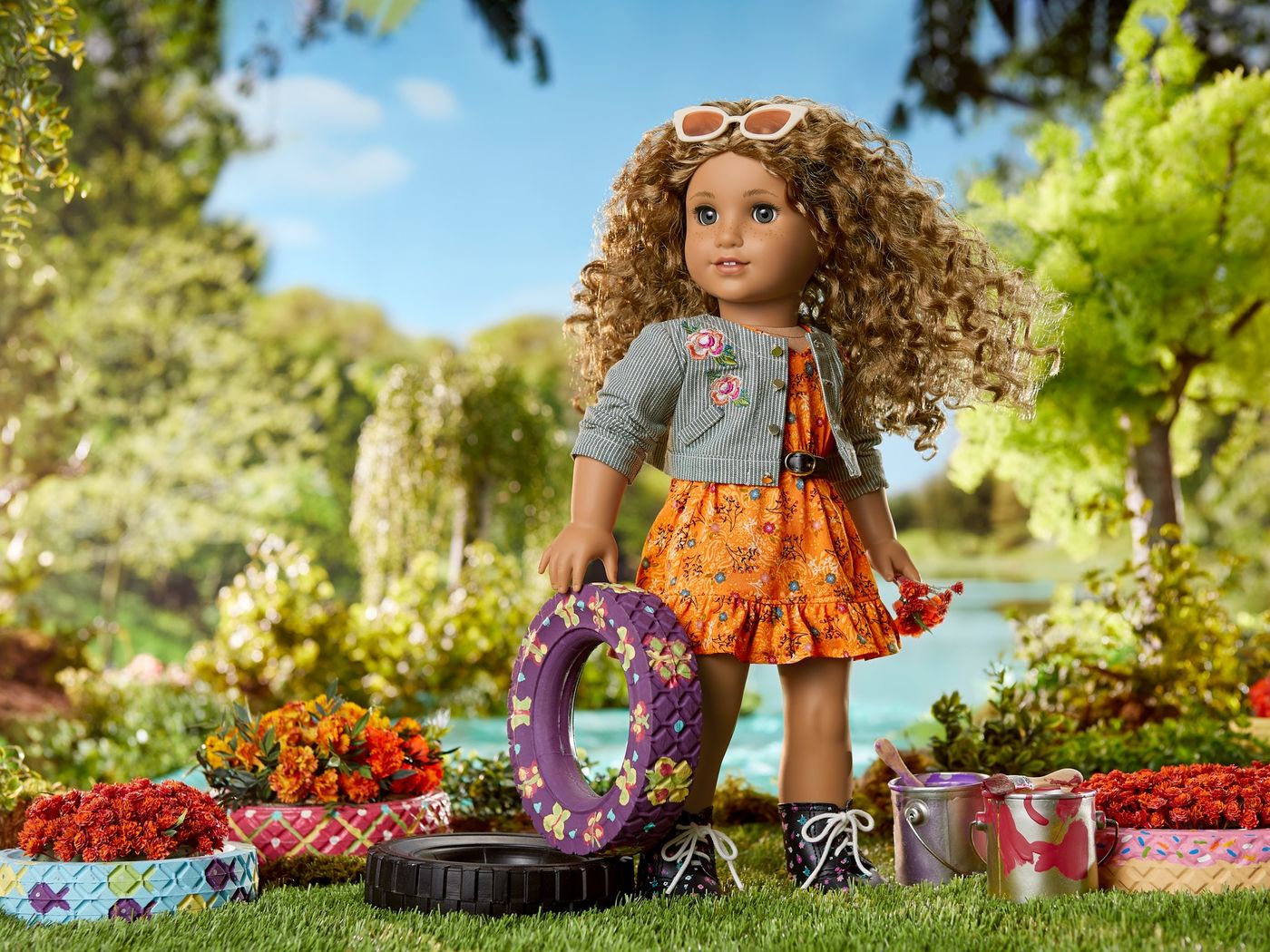 "American Girl (above: the new doll Evette Peters) was seeking to emphasize to its young audience the importance of being able to envision themselves as part of the larger American story," writes the Smithsonian's Katrina Lashley. "And that vision requires more accessible histories, as well as role models in civic engagement."

Last September, the American Girl company introduced the world to its new “World by Us” dolls, the Latina soccer player Maritza Ochoa, the fashion lover Makena Williams, who traces her heritage to Kenya, and the rising activist Evette Peeters, who lives in the Washington, D.C. neighborhood east of the Anacostia River. In the dolls’ accompanying novels, Maritza, Makena and Evette, who all live in the nation’s capital, work to address critical social issues including racism, immigration and environmentalism.

I learned about the new dolls a year ago when the company contacted me to participate as an advisor. “We’re starting an exciting new project to support social justice and environmental activism related to the Anacostia River,” they wrote to me in an email.

Having heard about the ongoing environmental work at the Smithsonian’s Anacostia Community Museum (ACM), the American Girl team wanted to know if I’d be willing to share some of the research and documentation done over the years and review two manuscript drafts. The preteen Evette Peeters lives with her biracial family, and finds her life bisected in many ways by the Anacostia River. Through her passionate activism, Evette works to heal the place and people she cares deeply about, creating new friendships and repairing strained relationships.

I needed no introductions; I can still remember my first encounter with the American Girl doll experience. When I was eight, my mother left me with my grandmother in Barbados after she moved to New York in search of employment. I remember the thrill of opening a care package she’d sent me containing the book about the experiences of Molly McIntire, a girl growing up on the American home front during World War II. I read it with relish. That first book grew to a collection after I moved to the U.S. a year later. I spent hours paging through the American Girl catalog and after much pleading and begging with my mother, who was reluctant to purchase a doll that cost almost $100, I raised enough money for my own Edwardian-era doll, Samantha Parkington.

For me, consulting on the project was a careful balance. I was weighing the nostalgia and memories of a naïve, recently naturalized child against my adult personal and professional experiences, as well as the complexities and contradictions inherent in the representation of, and the engagement with, the American narrative. In other words, it was complicated.

One constant of public history work is the ongoing negotiations between cultural institutions and the communities they are meant to serve. We are always making difficult choices. What histories and experiences are reflected in these civic spaces? In what manner? Why does it matter?

American Girl was seeking to emphasize to its young audience the importance of being able to envision themselves as part of the larger American story; and that vision requires more accessible histories, as well as role models in civic engagement.

For more than a half century, ACM has had a deep connection to its surrounding neighborhood. The museum has been at the forefront of working with communities both locally and nationally to understand and address issues that underlie the complexities of identity, injustice and agency while helping its youngest visitors to understand their role in making a better community.

Founded in 1967 as the first federally funded community museum, the Anacostia Neighborhood Museum (as ACM was then known) served as an extension of the community, a civic space in which visitors encountered their past, made honest reflections of their present, while working towards a more equitable future. This notion of the museum in total service to its community has been central to all of ACM’s subsequent work.

In 2010, against the backdrop of the city’s restoration of the Anacostia River and development of its waterfront, ACM’s late senior historian Gail S. Lowe decided to investigate this body of water, which has been, in many ways, a psychological and physical barrier in the city. The river, which flows from the Maryland suburbs to the mouth of the Potomac River in downtown D.C., has long divided neighborhoods of color from the federal city’s power centers where the nation’s leaders have lived and governed. Some of the neighborhoods east of the river struggle with income inequality, food insecurity, housing shortages and environmental challenges.

The author of Evette’s story is Sharon Dennis Wyeth, a D.C. native who grew up east of the Anacostia River, a stone’s throw away from the Frederick Douglas house and across the alley from her grandparents. Just like her characters, Evette and her grandmother, the character “Gran E,” Sharon shared a close relationship with her “Nanna.” Sharon also has a deep connection to the river and its ecosystem. “The Anacostia River was my most consistent contact with nature. The river was powerful and beautiful; changeable yet always there.

“The Anacostia made me feel peaceful and also stirred my imagination. It was a reminder that there was a wider world. My family also loved the river. We took our family pictures there on special occasions. My grandfather used to fish there and I'm pretty sure that he and my grandmother swam in one of the tributaries. That family lore made it into my book, as did my own love for the Anacostia River”.

Exploring how the Anacostia had become the city’s “Forgotten River,” quickly became the focus of Lowe’s project Urban Waterways, which grew to become the museum’s bold next challenge, exploring the psychological, social, economic, environmental and political costs to the people living along its banks, and digging out the history of these neighborhood communities. “When my character Evette discovers that the tributary her grandmother once swam in has become polluted, she feels helpless at first,” says Wyeth. “But when she discovers a group dedicated to cleaning up the river, she enlists them to  help organize a clean up event.”

That same passion for the river fueled our first two years of research and resulted in the museum’s popular 2012 exhibition, “Reclaiming the Edge: urban waterways & civic engagement.” Ongoing work has since fostered workshops, community forums, a national symposium, an urban gardening program and a project newsletter.

I became aware of the dynamic work of women across the U.S., making contributions on topics that ranged from environmental justice, advocating for the creation of urban parks, creating more pathways into STEM, and highlighting cultural practice as a form of environmental advocacy.

What would happen if we could bring these national activists into conversation with local leaders?

In March 2018, with support from the Smithsonian’s American Women’s History Initiative, the Women’s Environmental Leadership (WEL) initiative was launched. With the goal of building capacity for next steps in environmental leadership and guided by the themes of mentorship, education, training and leadership, 60 participants—representing more than a century of environmental leadership—gathered for a one-day summit, where they met not only as professionals, but also as representatives of an intersection of communities impacted by and engaged in environmental issues.

This powerful women-centered convening helped to foster the narrative goals Wyeth sought for Evette Peters’ story. Through her love of family and care for the places along the Anacostia that hold special meaning for them, Evette serves as one example of the possibility of agency that was at the heart of the summit.

The groups leaders saw reason for a second gathering, and through discussions, workshops and a series of oral histories, their work helped to develop a publication aimed at middle school audiences, entitled Women, Environmentalism, and Justice, that seeks to empower young girls.

“The clean up event I describe in the book, featuring Evette and her friends along with the rest of the team,” says Wyeth, “was inspired by what I'd learned about current efforts in D.C. on the part of large organizations as well as community-based environmental groups to restore the Anacostia to full health.”

Even though Wyeth had grown up in D.C. it had been years since she lived there. It was through ACM’s research that she was able to get an update on the river and its community.

“The museum’s work alerted me to organizations involved in restoring the Anacostia, goals for cleaning up the river and the progress that had been made. An introduction to neighborhood environmentalist, Dennis Chestnut, who had his own link to ACM was also key. Dennis has worked on the river's behalf since his own childhood. Having a real conversation with somebody who was ‘walking the walk’ was both informative and affirming.”

Ultimately Wyeth sees Evette’s story as a model for younger readers to take action and find a shared cause that can unite all communities.

“A river unites different locations and different people. When they read Evette's story and how she makes a difference, some of those young people might feel empowered knowing there's a way they can make a difference, too.”

Katrina D. Lashley is a program coordinator at Anacostia Community Museum where she leads the Urban Waterways Project, documenting the relationship between urban communities and their watersheds thorough the lenses of civic oversight, community engagement and environmental advocacy.