Claire Evans is chasing a high. Her father worked at Intel for more than 20 years and with technology as the social currency of her teens, she grew up ensconced in an appreciation for it. Her own fascination with it was cultivated in front of a boxy PC that became her portal to the then-burgeoning phenomenon that’s now called the internet.

“For me, surfing the web on my Dell was like being in a spaceship and traveling the universe in a powerful way,” Evans remembers. “It became this gateway to another dimension. I wonder if teenagers now take that for granted. It's not the same as it used to be, but it was wild.”

Hers is an epic girl-meets-tech love saga, and it’s being written daily in her work as a journalist who’s long covered the cultural complexities of that space. But that’s not what this story is about.

Evans’ mission, the one that birthed an entirely new research interest, is elevating the names and contributions of women in the field where her roots are, where she’s connected. Her 2018 book Broad Band: The Untold Story of the Women Who Made the Internet is still creating buzz, and just as she navigated her early infatuation with modems and programs, she’s tactical and fervent about accurizing tech’s male-washed history. 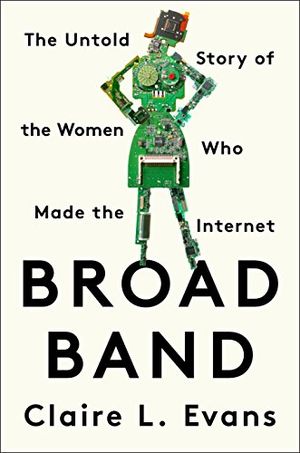 Broad Band: The Untold Story of the Women Who Made the Internet

From Ada Lovelace, who wrote the first computer program in the Victorian Age, to the cyberpunk Web designers of the 1990s, female visionaries have always been at the vanguard of technology and innovation.

“There's a moment in the early development of every technological wave where there's no real established precedent. No canon, no authority. People could come in and define their space and make contributions early on because they weren’t held back by the existing patriarchal structure of academia or industry,” she says.

“Because of that, a lot of women helped in early programming, hypertech, online community development and web publishing. They had the freedom to work in those spaces without anyone looking over their shoulder too much. But as soon as those things became established and viable commercially, women seemed to be slowly pushed out.” It’s happened again and again in an industry that changed when money became part of its composition, says Evans.

The Internet was never conceived to be the consumer technology it is today but women were always a part of shaping its growth and ultimate expansion. Originally designed to help scientists, engineers and academics share resources, its monetization changed the way subsequent technologies were designed. “When we build things specifically to make money, it’s different than if we're building just to make the world a better place. I think it's very easy to be doom and gloom about what the Internet is like now. It's fractured us so much and become such a toxic force in so many ways,” she says. “There's nothing about technology that’s inherently good or bad, male or female. It's really what we do with it. And there have been many applications in the history of technology that create beauty or serve society in a positive way.”

Part of reframing the story about how the internet came to be is reflecting on pre-capitalistic priorities, values and the way the space allowed for experimentation and creative thought and collaboration, before the information hoarding that thwarts the theft of million- and billion-dollar ideas. Those are the spaces that nurtured new discoveries and conclusions. Those are also the spaces where the formative contributions of women have been conveniently forgotten and deliberately erased.

“When we talk about the history of tech and its industry, we think of the realm of entrepreneurship and titans of industry like Elon Musk and Jeff Bezos building massive companies,” she says. “But that's just one way of thinking about making a good or interesting contribution. I don't necessarily think that the company that makes the most money is the most historically relevant.”

When the conversation is about economic impact, those points are important, she admits. But in terms of what technology can do, the credit goes to people who don't make any money, people who are building software and hardware for the sheer joy and desire to explore new technology.

“Those are spaces where women have been able to make contributions and find points of entry at work—the people-oriented sides of technology, which are kind of undervalued but hugely important,” says Evans. “The user is what this is all about. A computer is just a box without people interacting with it and making that interaction useful and interesting and beautiful and compelling. It’s a really important job. And it's a job that has been kind of dominated by women throughout the history of tech.” Whether they got rich and famous doesn’t have anything to do with how important their work is.

The story of women and the world wide web—and its parent technology in general—can’t ever be considered complete. It’s living history that’s converged with every major development, every milestone in the field, every brainstorm because each idea somehow implements and builds on another before it.

Last September, Evans visited the Smithsonian's Hirshhorn Museum and Sculpture Garden to join in conversation with Ellen Ullman, a former software engineer and author of the classic memoir Close to the Machine: Technophilia and Its Discontents. Their discussion was recorded.

Editor's Note, March 18, 2019: A previous version of this article incorrectly stated where Claire Evan's father worked. The story has been corrected.