In duels over Eastern Europe, the agile fighter scored kill after kill 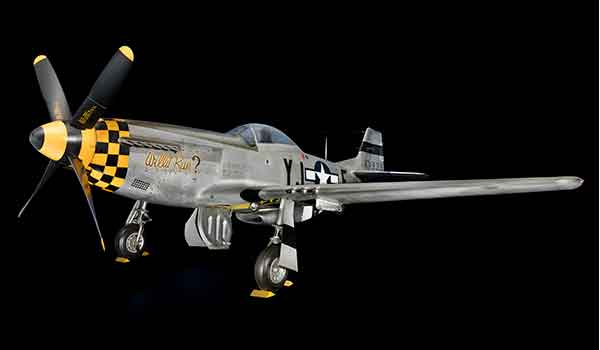 The P-51 Mustang was the darling of the Army Air Forces. Aerodynamically agile and acrobatic, the aircraft was fast and furious in its effectiveness in downing enemy aircraft. NASM

From a Luftwaffe base in Lyke, East Prussia, on August 6, 1944 , the German pilot Günther Schack scrambled his pursuit squadron of nine Me 109s. They headed out looking for a large number of “furniture vans,” German slang for the Soviets’ four-engine bombers.

As it chased down this “big herd” on the Eastern Front, the unit was taken by surprise, mainly because the Soviet air force did not often participate in strategic bombing. They had a right to be suspicious—these planes were American, flying toward a base inside the Soviet Union.

As Schack led his planes into the attack, he realized it was a trap. Suddenly, a squadron of P-51D Mustangs came roaring out of the sun, each with six 50-caliber machine guns blazing. The German pilot began evasive maneuvers as an American aircraft quickly jumped on his tail.

Behind Schack was Lt. Hollis “Bud” Nowlin, leader of the Greenhouse White Flight unit from the 357th Fighter Group of the 66th Fighter Wing in the Eighth Air Force. The American pilot and his group had accompanied B-17s in bombardment groups from England to a Soviet airbase as part of Operation Frantic, an attempt by the Allies to hit German factories that had moved eastward to avoid bombing.

Nowlin closed in on the Me 109 flown by Schack, a decorated Luftwaffe pilot who would end the war with 174 kills on the Eastern Front. Nowlin lined up his shot in his P-51D—known as Hells Bells—and squeezed off a burst at the enemy plane. A puff of white smoke came from Schack’s engine, indicating a hit to the cooling system.

Low on fuel and ammunition, Nowlin broke off pursuit and waved to the enemy pilot. He reported his hit as a “damaged” plane and returned to the bombers, which he escorted to a base east of Kiev.

In the German plane, Schack knew he was in trouble. His engine was cooked and now he had to find a place to make an emergency landing. He belly-flopped the Me 109 on the ground near Soviet troops but was rescued by German soldiers.

For 40 years, the Luftwaffe ace would wonder why the American had only waved and did not finish him off.

The P-51 was the darling of the Army Air Forces. Aerodynamically agile and acrobatic, the Mustang was fast and furious in its effectiveness in downing enemy aircraft. A latecomer to World War II, it first saw combat over Europe near the end of 1943. The long-range fighter proved to be just what the Allies needed to escort bombers to and from Germany as they hammered enemy targets.

“In terms of the air war over Europe with the strategic bombing campaign, the P-51 was a war-winning weapon,” says Jeremy Kinney, associate director of research and curatorial affairs at the Smithsonian’s National Air and Space Museum. “As a fighter escort, it enabled the successful bombing of targets deep in Nazi Germany from bases in England and Italy. That was a crucial component in the destruction of strategic sites such as factories and munition plants.”

Prior to the introduction of the P-51, Allied fighters could only escort bombers so far because of limited range. The slow, heavily laden aircraft were easy pickings for fast-moving German planes. With external tanks, the Mustang could fly nearly 1,400 miles—more than enough to provide protection for the bombers all the way to their targets in Germany and back home again.

“The P-51 became the quintessential symbol of American fighter aircraft,” Kinney says. “Other fighters were just as successful, but the Mustang really captures the imagination in terms of when we think about World War II fighters. This plane facilitated a change in tactics and gave the Eighth and Fifteenth Air Forces superiority in the skies over Europe.”

That tactical deviation resulted in the near destruction of the Luftwaffe. Once Allied bombers were attacked, P-51 pilots had permission to break formation and shoot down German fighters at will. The goal was simple: knock down as many enemy aircraft as possible to inhibit Nazi Germany’s ability to conduct war. Without fear of assault from the air, Allied forces on the ground were free to engage Axis units at will. Mustang pilots were up to the challenge: they destroyed nearly 5,000 enemy aircraft in World War II.

The Smithsonian has a P-51D in its collections; it will go on display in the museum’s new World War II Gallery when it reopens in 2022 on the National Mall in Washington, D.C., following the building’s massive renovation. Built in 1945, this aircraft served on the home front. However, in its current restored configuration, the historical fighter is painted in the colors and markings of the 351st Fighter Squadron in the 353rd Fighter Group of the Eighth Air Force. During World War II, this unit shot down 330 1/2 aircraft and destroyed 414 planes on the ground.

With its bubble canopy and aerodynamic styling, the later-version P-51D is often viewed as the “missing link” between World War II fighters and modern-day jet planes. All told, some 14,000 Mustangs were manufactured by North American in World War II. Of that total, 8,032 were P-51Ds—more than all other variants combined.

Two elements made the Mustang a formidable fighter. The first was its sleek design and maneuverability. Pilots like Bud Anderson—America’s only living double ace—and his wingman Chuck Yeager loved the plane for its responsiveness and agility. In P-51s, Anderson scored 16.25 kills, while Yeager racked up 12.5.

The other advantage was its engine. The Mustang was powered by the Rolls-Royce Merlin engine, a 1,490-horsepower dynamo that provided enhanced performance and superior handling. With a top speed of 440 miles per hour, the fighter could match almost any enemy aircraft.

“People love this plane,” Kinney says. “If you’ve ever heard a Mustang fly, you’ll never forget it. The sound of the Merlin engine is distinctive. It really cements in the popular memory of World War II what that airplane represents.”

More than four decades after World War II, Bud Nowlin and Günther Schack finally got to meet each other in person. On that summer day in 1944, neither knew who was in the other plane as they dueled over the skies of Eastern Europe. A historian had deduced that it was these two who were engaged in combat and brought them together for the first time at Schack’s home in Germany.

The German pilot had always wondered why the American had not completed the kill. After meeting Nowlin, Schack determined his former adversary was a “good man” who did not want to inflict more harm on a crippled airman.

Nowlin was surprised to learn he had in fact shot down the Me 109 that day. He had always believed it was just damaged, but the story of the crash landing confirmed the kill. He admitted later to not realizing at the time how much harm he had caused to Schack’s plane.

“I was a bit late finding out that he had reduced power and as a result I gave what I call a wave-off, somewhere between a wave and a salute,” he says in To War with the Yoxford Boys: The Complete Story of the 357th Fighter Group by Merle Olmsted, official historian of the unit.

After their second encounter, the two former pilots became friends. Nowlin and Schack would attend reunions together and talk about the war. They remained in touch with each other until Schack’s death in 2003. Nowlin died in 2005.