John Glenn flew daringly as a fighter pilot in two wars, rocketed into space to become the first American to orbit the Earth, served Ohio in the U.S. Senate longer than any other state leader, and returned to space in 1998 as the oldest human to break the bonds of gravity. Amazingly, these are just a few of the achievements that filled the remarkable life of an American patriot.

Like all of us, Glenn suffered failures alongside his successes, but they did not diminish his many accomplishments or his fascinating life. Remnants of Glenn’s life, such as his spacesuit from his 1962 orbital flight and his capsule, the MA-6 otherwise known as Friendship 7, now reside in the Smithsonian’s National Air and Space Museum, where his space travel is celebrated. Several images, spanning his career, reside in the National Portrait Gallery and still more artifacts and images from his storied life are held at the National Museum of American History.

Glenn grew up in an Ohio village—New Concord—where he wasted no time finding the love of his life, Annie Castor. They met in a playpen while their respective parents enjoyed a dinner party. The couple started dating in early adolescence and stayed together until his death at 95 in 2016. He never dated another woman. 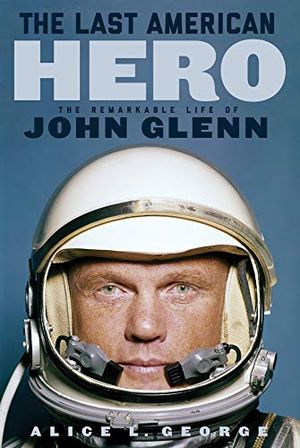 The Last American Hero: The Remarkable Life of John Glenn

The Last American Hero is a stunning examination of the layers that formed the man: a hero of the Cold War, a two-time astronaut, a veteran senator, a devoted husband and father, and much more. At a time when an increasingly cynical world needs heroes, John Glenn’s aura burns brightly in American memory.

In December 1941, when a swarm of Japanese planes attacked Pearl Harbor, he was a college student, but he rushed to enlist in the military, becoming a marine fighter pilot. In World War II, he flew 59 missions in the South Pacific and had the opportunity to work with his childhood hero and fellow aviator, Charles Lindbergh, who represented an airplane manufacturer and sometimes flew alongside Glenn’s squadron. At the war’s end, Glenn decided to make service in the Marine Corps his career. Soon, he and Annie celebrated the arrival of two children, David in 1945 and Lyn two years later.

Just seven years after World War II’s end, he found himself at war defending South Korea from a North Korean invasion. This battlefield experience came with an unexpected perk—the opportunity to fly with baseball star Ted Williams as his wingman. Glenn flew 90 successful missions in Korea, and while on assignment with the Air Force, he downed three Soviet-made MiGs in the last nine days of the war.

Glenn spent part of the 1950s in a job he adored, being a test pilot, but he also worked several years as a frustrated paper-pusher at the Bureau of Aeronautics. Using his own initiative, Glenn found a way to get back into the air, even if it was for only one day. He proposed a plan to break the existing transcontinental flight record and test a new plane, the Vought F8U Crusader, simultaneously. Crossing from Los Angeles to New York in three hours, 23 minutes, 8.4 seconds, he shaved more than 23 minutes off the old record. Shortly afterward, he was invited to appear on the game show, Name That Tune. Partnering with 10-year-old actor-singer, Eddie Hodges, he shared the top prize of $25,000.

Glenn’s future was about to take a right turn. The Soviet Union’s launch of Sputnik, the first manmade satellite, in 1957 forced the United States to hasten the drive for space exploration. By early 1959, the National Aeronautics and Space Administration began recruiting experienced test pilots to join the nation’s first manned space program, Project Mercury. As was his habit, Glenn stepped forward. From 510 applicants, officials were able to cut the list to 32, and after a series of odious physical and psychological tests, he emerged as one of seven astronauts.

Glenn wanted to be the first man in space or at least the first American in space; however, Yuri Gagarin claimed the first title, and Alan Shepard took the second. Nevertheless, in 1962, when Glenn became the first American to orbit the Earth and the first space traveler to take such a voyage with complete minute-by-minute news coverage, he won acclaim both nationally and internationally. His reputation soared after Americans heard his voice remain steadfastly calm, even after learning that his heatshield might be loose and that he might burn up when passing through the Earth’s atmosphere before splashdown. Safely back on Earth, a ticker-tape parade and a joint meeting of Congress welcomed his return. He had become America’s space star, while Shepard simply became lost in his shadow.

As America’s most famous astronaut, he found it oddly disheartening that he wasn’t scheduled for any future flights. He did not know that President John F. Kennedy had urged NASA not to risk his life because of his inspirational value to the American public as a hero. In the wake of Kennedy’s November 1963 assassination, Glenn felt a call to public service. Consequently, he left NASA in 1964 to seek a U.S. Senate seat from Ohio. Unfortunately, the spaceman suffered a fall in an earthbound bathroom that left him with a chronic dizziness, which forced him to abandon the race.

Four years later and recovered, Glenn was back on the campaign trail, this time with his friend, Sen. Robert Kennedy of New York, who was seeking the Democratic presidential nomination. When Kennedy was shot at the celebration of his California primary victory, he survived surgery, but his pregnant wife, Ethel, asked the Glenns to escort those of their children who were in Los Angeles back to their Hickory Hill home in Virginia. The next morning, Glenn joined a neighbor in sitting on each child’s bed and delivering the news that their father had died.

Coming out of 1968, Glenn decided to re-engage in politics and again sought Ohio’s Democratic nomination for the U.S. Senate; however, he lost. In 1974, he would try it once again and win. Ultimately, he served four consecutive six-year terms—more than any previous Ohio senator. Over the years, he pushed through a nuclear non-proliferation treaty, and he promoted legislation to improve the efficiency of Washington’s bureaucracy.

After a 1980 landslide victory, some urged Glenn to seek the presidency. He launched a campaign, and polls showed that he was a strong contender. Nevertheless, he lost badly in the early primaries for the Democratic nomination and dropped out after defeats on Super Tuesday, ending his campaign with a huge debt because of flaws in his organization.

Even when he stood accused of wrongdoing, his reputation was only slightly tarnished for it. In 1989 and 1990, Glenn found himself in the unusual position of being charged with unethical behavior in the collapse of the savings and loan industry. He was identified as one of the “Keating Five,” senators who had met with savings and loan head Charles Keating and had received campaign funding from him. In the end, the Senate Ethics Committee cleared Glenn of the more serious charges and found him guilty of only bad judgment in arranging a lunch between Keating and the speaker of the house.

Glenn announced in early 1998 that he would retire and not seek re-election in November, when he would be 77. He had higher goals for himself. He wanted to return to space. After passing many tests and selling NASA officials on the value of examining the medical effects of space travel on an older American, he rode into Earth orbit in late October as one of seven astronauts on the shuttle Discovery. As the lowest ranking crew member, he helped with experiments and served as a glorified guinea pig. For nine days, he got the opportunity to view his home planet from outer space for a second time. This expedition was his last major venture, although after leaving the Senate, he served on a couple of government panels, taught at an Ohio State school that promoted public service and carried his name, and even appeared in an episode of the TV sitcom, Frasier.

Glenn’s life was more than unusual. It was exemplary. Time and time again, he volunteered to serve his nation. A friend explained Glenn’s actions as a Mercury astronaut this way: “John tries to behave as if every impressionable youngster in the country were watching him every moment of the day.” In sharp contrast to many politicians today, he never gave up the effort to be a good example to his fellow citizens.

Over the years, Glenn traveled the globe. He met cabbies and kings, waitresses and world leaders. Colleagues and friends noticed an interesting facet of that experience. He treated each person in the same way, no matter what their status. And this, perhaps more than any of his many accomplishments, represents the essence of John Glenn, a brave man who never reveled in his own success and valued every human life equally. Even today, at a time when many see heroes only in fiction, the title still clings to his memory.

The Last American Hero: The Remarkable Life of John Glenn by Smithsonian magazine contributor Alice L. George was released by the Chicago Review Press on November 10 and explores this extraordinary man, spotlighting the many factors that made him unique in American public life.