Who Gets to Define Native American Art?

A pivotal letter from Oscar Howe, whose work is the focus of a new exhibition, demanded the right to free expression and the art world began to listen 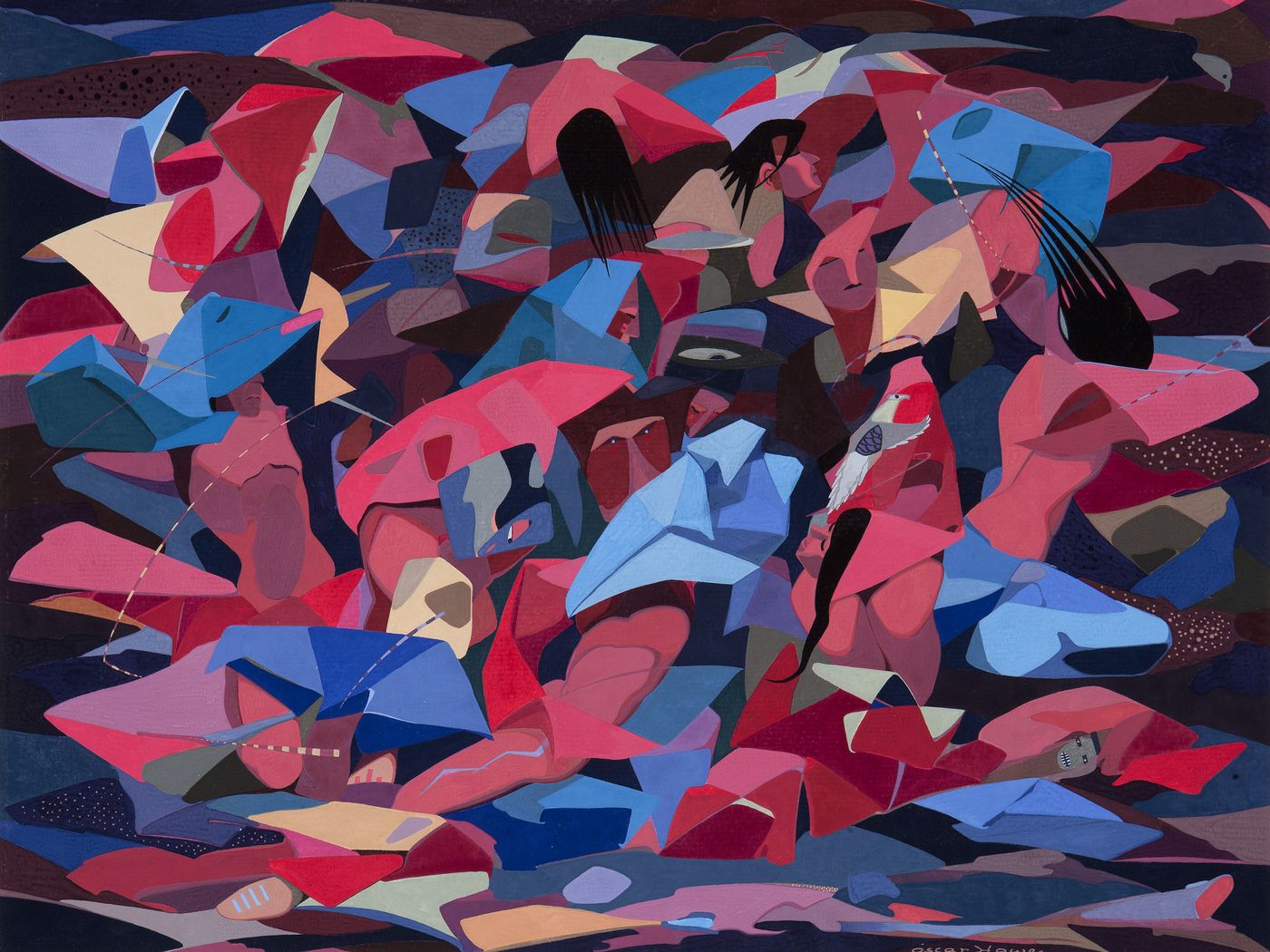 Oscar Howe was furious. Howe, a Native American artist, had submitted a painting to the 1958 Philbrook Indian Annual art competition and the jurors had turned it down. It wasn’t the rejection that offended him but the rationale. Howe had begun exploring abstraction in his work, and the painting with its bold planes of color and jagged abstract shapes defied the jurors’ expectations of what Native American art could look like. It was, they said, a “fine painting–but not Indian.”

Howe fired back, in a response that electrified the Native American art world at the time and still is talked about today. “Who ever said, that my paintings are not in the traditional Indian style, has poor knowledge of Indian art indeed. There is much more to Indian Art, than pretty, stylized pictures,” he wrote in a letter to the Philbrook. He added: “We are to be herded like a bunch of sheep, with no right for individualism, dictated as the Indian has always been, put on reservations and treated like a child, and only the White Man knows what is best for him.”

A copy of that letter is included, along with more than 65 of the artist’s paintings and drawings, in “Dakota Modern: The Art of Oscar Howe,” an exhibition currently on view at the Smithsonian's National Museum of the American Indian in New York City. Kathleen Ash-Milby, curator of Native American Art at the Portland Art Museum in Oregon who organized the show, says the letter tackles a fundamental question: “Who gets to define Native American art?”

Howe’s anger had been building for some time. “The letter is a culmination of decades of frustration and resentment about how the government treated Native people, and things that he's gone through,” Ash-Milby says. “It’s about so much more than just this painting not getting in.”

For decades before Howe wrote it, government officials, art collectors and educators, many of them white, had a powerful influence over what types of work Native American artists could make. Many of these power brokers tried to preserve what they perceived as Native American traditional arts by sheltering Native artists from outside influences—to the point of denying art students any exposure to non-Native art. They also saw art as a tool for economic development for Native American communities and they discouraged artistic experimentation that might not be marketable.

Howe, like many Native artists of his time, had studied at a Santa Fe art school known as the Studio. The Studio style of painting, also called flat or traditional style, which can be seen in Howe's 1934-1938 work Hunter's Dream, was the approved method for Native American painting in the mid-20th century. The style presented idealized Native American subjects, sharply outlined figures and flat colors with little or no three-dimensionality or background. Even as Howe began to break free of its strictures in the 1950s, there were many artists who saw the Studio style as a valid extension of their own tradition and continued to pursue it, Ash-Milby says. Artists like Howe “who wanted to deviate from that had a lot to push back against.”

Howe wasn’t the only artist to feel frustrated with its limitations, and several of his contemporaries were also exploring abstraction in the ’50s. “But he was the first person who made a stink about it,” Ash-Milby says. His letter “cracked open some of those disagreements,” she says, and launched a conversation about Native American artists’ right to self-expression, to make whatever kind of art they wanted. The Philbrook staff engaged with Howe over his blistering critique, and the next year dramatically broadened the criteria for inclusion. “They realized what they were doing was far too restrictive,” she says, “and it was holding Native artists back.”

In some ways the debate Howe opened in 1958 continues today, even as Native artists create work across the spectrum of contemporary media. Who does get to define Native American art? Words like “authentic” and “traditional” are “loaded with a lot of assumptions and stereotypes,” says Christina Burke, curator of Native American and non-Western art at Philbrook Museum of Art in Tulsa, which sponsored the Indian Annual until it ended in 1979. She mentions, as an example, beaded moccasins from the late 1800s. Some people “point to those objects as being, quote unquote, authentic traditional Native art,” she says, and “I ask them where those glass beads came from.” The beads for the most part were mass-produced in Europe and traded to Native communities. “These were contemporary works when they were made. That was a new material…. Were those at the time authentic Native art? Again, who’s doing the defining?”

“For me as a non-Native curator of Native art, I look to the Native artists and how they are defining what counts and what is … ‘authentic,’” Burke says. “I don’t think it has anything to do with time period or medium or technique or process. I think it has to do with the identity of the maker.”

It might seem simple to say that if it’s made by a Native American artist, it’s Native American art. And yet Native identity can itself be a knotty subject, perhaps especially so for artists. Under U.S. law, it’s illegal to sell your work as Native American art if you’re not enrolled in or certified by a federally or state-recognized tribe. And each of the hundreds of tribes in the U.S. sets its own citizenship criteria, often requiring documentation of varying degrees of hereditary descent from 19th-century tribes. “Native people are the only ethnic group in the U.S. whose identity is recognized and monitored by the federal government,” Burke says, adding, “It gets complicated.”

Within the contemporary Native art community, Ash-Milby says, there is also “debate about cultural ownership, and who has the right to use certain imagery or materials. If an artist is from one tribe but they're using materials and patterns from another, this gets all mixed up in the identity debate as well… Some people would say … that’s not theirs, that belongs to people from that tribe.”

Howe’s 1958 letter is probably what the artist is best known for today, but the exhibition turns attention to his art, tracing his path as both an innovative modernist and a keeper of the traditions of the Dakota people.

Born in 1915, Howe grew up on a reservation in South Dakota; he often referred to himself as a “full-blood Sioux Indian.” He spent long hours in childhood with his grandmother Shell Face, who told him stories about their ancestors, passed on her knowledge of cultural traditions and instilled in him the urge to keep that knowledge alive.

Howe enrolled in the Studio School in his late teens, learning the flat style taught there. Although it was exactly these kinds of “pretty, stylized pictures” he would rail against in 1958, he worked successfully in this style for many years, gradually loosening its constraints to pursue his own creative interests.

After Army service in Europe during World War II, Howe graduated from college in South Dakota and then got his MFA from the University of Oklahoma in 1953, one of few Native artists of his generation to earn art degrees from mainstream universities, Ash-Milby says. In grad school, he was exposed to the full range of mid-century modern art, from Surrealism to Abstract Expressionism. Soon after, his work began to evolve farther away from the traditional style and into modernism.

The original painting that the Philbrook rejected has been lost, but a similar work from 1958, Umine Dance, includes abstract shapes like gnarled lightning bolts that represent the sounds and energy of the ceremonial dance. A later work, Courting, is an arrangement of fractured geometric forms that teeters on the edge of pure abstraction. But in fact, it portrays a traditional event in Dakota life, in which a new couple stands together wrapped in a red blanket.

These depictions of Dakota culture are key to Howe’s art. Ash-Milby says that for all the creative experimentation in his work, “his main driver was [that] he wanted to find a way to express and continue the Dakota tradition of storytelling and artistic practice.” Howe said he found the sources of his abstraction not in Europe but in Dakota and Lakota art, as in the abstract designs on the painted hide containers called parfleches. He borrowed his color palette and its symbolism from the same tradition. Even the heavy, textured paper he used evoked, for him, the animal hide that his ancestors painted on.

Inspired by his grandmother, he recorded Dakota stories and customs, both to pass them down in the community and to educate the wider public about his culture’s depth. He researched his subjects in detail, reading and seeking out elders who would share their knowledge with him. “He thought of himself as a traditional artist,” Ash-Milby says, “even though he was doing things that did not align with what other people thought was traditional American Indian painting.”

Howe returned to compete in, win and serve as a juror for the Philbrook Indian Annual for many years afterward. By the time he died in 1983, he had had a long career as an art educator, nurturing many young Native artists, and his work had been shown at the Museum of Modern Art in New York.

And yet in his lifetime, Ash-Milby says, critics struggled to categorize his work. They called it neo-Cubist and suggested, to his great frustration, that it was merely derivative of European art.

“His work was ahead of its time,” she says. “I don’t think the art world was ready to see him as both a Native American and a modern artist.”

“Dakota Modern: The Art of Oscar Howe,” is on view at the National Museum of the American Indian, George Gustav Heye Center, One Bowling Green, New York, New York, through September 11, 2022. It will travel to the Portland Art Museum in Portland, Oregon, October 29 to May 14, 2023, and the South Dakota Art Museum at South Dakota State University in Brookings June 10 to September 17, 2023.