There aren't many biological specimens that require the use of a gantry lift and the labor of eight people just to be moved. But even before a massive, extremely rare North Atlantic right whale skeleton arrived at the Smithsonian Museum Support Center to join the Natural History Museum's collections last month, it was clear that it was no ordinary specimen: Apparently, during the drive down from Massachusetts on an open trailer, the bones prompted some bystanders to call the police, reporting they'd seen a dinosaur skeleton being driven down the highway.

"Right whales are an extreme, in many ways: They're enormous, they're very beautiful, they're charismatic and they're critically endangered," said Charles Potter, who manages the museum's marine mammal collections, after leading the operation to lift the massive specimen from the trailer to a warehouse in Suitland, Maryland, that houses hundreds of whale specimens. "This is the first complete whale from this species to enter our collection, so it's really a milestone for us." 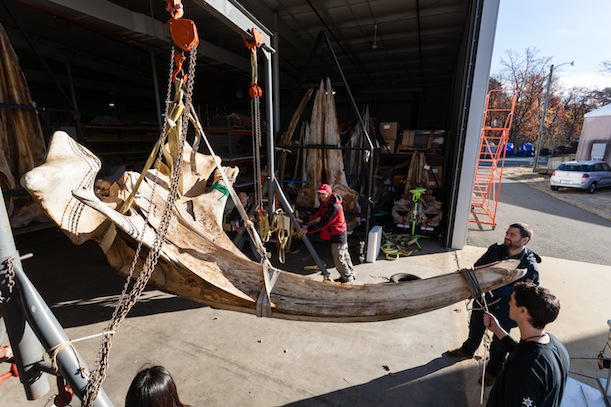 The whale's skull is hoisted off a trailer and into the warehouse that stores the marine mammal collection. Photo by James Di Loreto, Smithsonian

The whale, which died in 2010, was a male nicknamed "Tips" because of the scars on the tips of its flukes. Tips was one of roughly 400 surviving North Atlantic right whales, which are among the most endangered of all whale species. It was first sighted and catalogued by New England Aquarium Right Whale Group in 1980, and had since been sighted around 75 times. Researchers knew Tips well for his unusual behaviors—he was particularly curious about boats, at times swimming circles around research vessels in the Bay of Fundy while blowing bubbles underwater.

"I've been hoping to get a complete specimen from this species since I've been here," Potter says. "But on the other hand, it's sort of melancholy."

Tips was found dead, floating offshore of Cape May tangled in fishing equipment. Over the past few decades, an estimated 11 percent of the deaths of this species have occurred as a result of this threat. 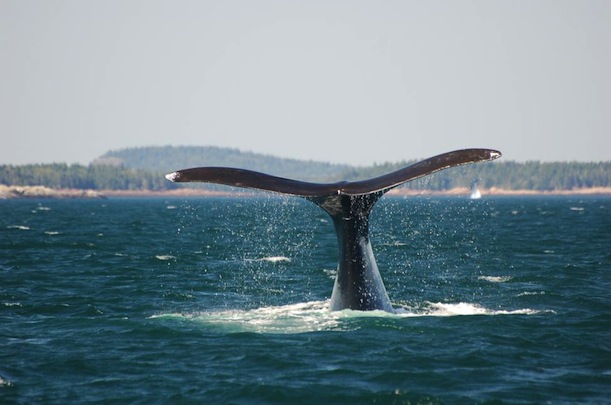 A photo of Tips during his life. Photo courtesy of North Atlantic Right Whale Catalog

Although there are programs in place to rescue tangled whales, for Tips, it was too late. "When we found it, there was rope wrapped around the whale and around its beak," said Michael Moore of the Woods Hole Oceanographic Institute, who performed a necropsy on the animal at the time of its death and has facilitated its donation to the Smithsonian. "By the time we pulled it ashore, the rope had washed off, but there was plenty of evidence of long-term entanglement that involved both flippers, the head and the jaw."

For three years, after the specimen had been cleaned and prepared by Tom French of the Massachusetts Department of Fish & Game, its identity was unknown. "Up until about three weeks ago it was a John Doe whale, a cold case," Moore said. "We didn't know who it was."

Eventually, though, Philip Hamilton of New England Aquarium closed the case. While looking at photos of the carcass, "I found one image taken by the Coast Guard that showed some distinctive scars on a fluke tip that had been overlooked," he writes on the aquarium's blog. "I knew those scars. With a sinking feeling, I called up comparable images from the catalog and had my suspicions confirmed—those marks belonged to an old friend, Tips." A subsequent genetic comparison between tissue samples taken from Tips during his life and after his death confirmed the identification. 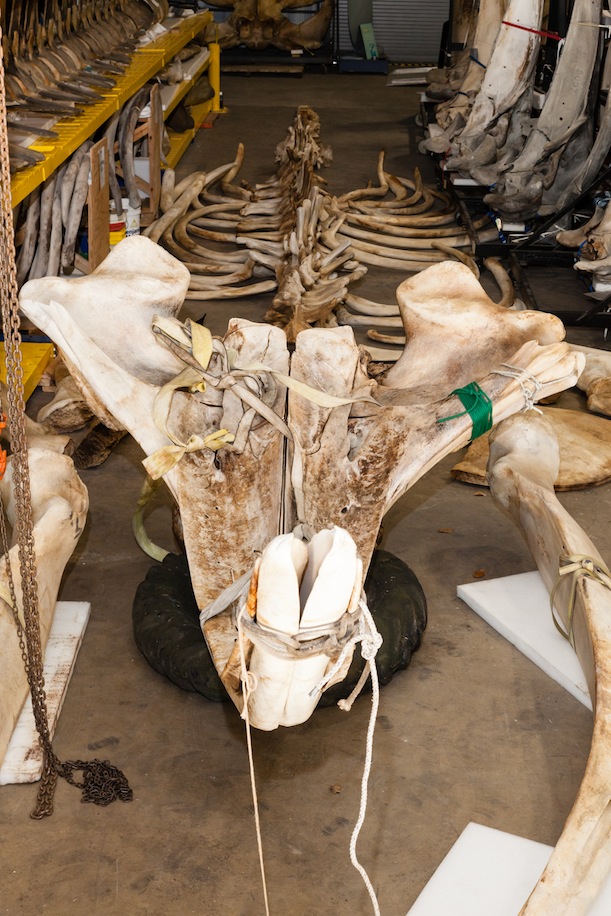 The whale's full skeleton, with rib bones and vertebrae visible behind the skull. Photo by James Di Loreto, Smithsonian

By entering the Smithsonian research collections, Tips can help researchers reduce similar deaths in the future. "The diagnosis of dead animals can enable us to mitigate the mortality factors that are driving these animals towards extinction," Moore said. Analysis of the skeleton, for instance, has already revealed bone breaks and scarring that were missed during the initial autopsy.

Other sorts of research will help scientists better understand other aspects of the species that might help ensure its survival. Genetic testing on this specimen and others will allow researchers to figure out which individuals parented which calves, ultimately constructing models of the species' biodiversity. Anatomical analysis, meanwhile, could provide information on the whales' still poorly-understood auditory system, and perhaps indicate why noise from ships has been shown to increase stress in the species.

"This is such a critically endangered species," Potter said. "It's crucial for us to have an idea about how these animals make a living, how they've evolved and how they're affected by human activities."