As America verges on the 50-year anniversary of Apollo 11’s historic visit to the Moon—now less than a year away—and moviegoers contemplate the achievements of Neil Armstrong and the Apollo program more broadly through Damien Chazelle’s thoughtful biopic First Man, it’s natural to wonder: Is there a future for crewed missions to the Moon? And if so, what form might they take?

These are among the many intriguing questions tackled in Royal Astronomical Society fellow Colin Stuart’s just-released Smithsonian Book, How to Live in Space, which addresses in breezy almanac style a host of topics any prospective astronaut will have to confront sooner or later, ranging from the effects of space life on the human body (beware cosmic background radiation) to personal hygiene aboard the International Space Station (stick to no-rinse shampoo and roll-on deodorant).

The book’s speculative segments on space tourism and coming NASA missions, though, are likely to make for the juiciest conversation starters, particularly in an America uncertain of its next-generation space exploration goals. Stuart addresses the possibility of getting humans to Mars down the line (Elon Musk is already hawking one-way tickets), and even potentially terraforming it using all the carbon dioxide now trapped in the red planet’s polar ice caps. But Mars is a far-off target, both literally (34 million miles away at its nearest) and metaphorically. It would take decades, if not a century, for human astronauts to establish a substantial presence there. The Moon, however, is already within our reach.

Armstrong and Buzz Aldrin’s 1969 moonwalk was without a doubt a seminal moment in the space race with the U.S.S.R., a triumph of American ingenuity. But it was hardly a definitive scientific evaluation. More concerned with daring than data, Apollo 11 put the human race in physical contact with the Moon but left scads of science questions unanswered. Some of these were cleared up by the subsequent Apollo missions, which employed rovers to scout the surface further and brought the total amount of moonrock recovered to 80 lbs. Even so, we still have plenty left to learn about our nearest neighbor’s composition, history and relationship with Earth. 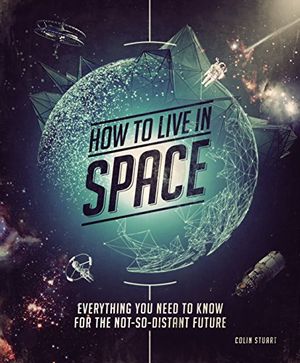 How to Live in Space: Everything You Need to Know for the Not-So-Distant Future

Given that life on Earth can be complicated enough, how can we survive and thrive in the zero-gravity, absolute-zero far reaches of space? Look no further: How to Live in Space is chock-full of all the essential information you need to equip yourself for life beyond our blue planet.

The most obvious follow-up mission, Stuart explains, would be another Apollo-style landing. No human has walked on the lunar surface since the late Apollo astronaut Gene Cernan, who was a member of the Apollo 17 crew in 1972. If America were to return to the Moon with present-day science instruments, NASA could draw much more precise conclusions as to its makeup and physical properties. Such a mission would be especially exciting, Stuart notes, if humans were to visit the far side of the Moon, which has not yet been explored.

Tidal locking ensures that the same face of the Moon is always pointing away from Earth—which half of the Moon is in darkness varies continually, but its overall orientation vis-à-vis the Earth does not. “Consequently,” Stuart writes, “the far side of the Moon represents a largely unexplored treasure trove.” If a human crew could retrieve rock samples from that untouched far side, as opposed to the side visited by all 12 of the “Apollo dozen,” the science return would be appreciable indeed.

A more ambitious next step would be the erection of a full-scale moon base—most likely at the body’s south pole, which is bathed in sunlight fully 90 percent of the time. “That solar energy is a precious commodity,” Stuart writes, “and would be gobbled up by the banks of solar panels we’d build to power our Moon colony.” Additionally, water ice trapped in shadow at the bottoms of some of the region’s large craters could be hydrolyzed to yield oxygen for breathing and hydrogen for the synthesis of rocket fuel.

It might even be possible, Stuart notes, to mine the Moon from such a base. Such an industrial undertaking would likely focus on the rare isotope helium-3, coveted among those pioneering in nuclear fusion reactors.

Maintaining a moon base would be a costly and difficult exercise; it’s unlikely the U.S. could go it alone as it did in the days of the Cold War. Fortunately, recent decades have been characterized by a spirit of multinational collaboration in space exploration, with astronauts from disparate cultures coming together aboard the International Space Station in pursuit of findings with global benefits. Now, Stuart reports that “NASA, the European Space Agency, and Roscosmos (the Russian space agency) are already looking into the possibility” of a jointly operated lunar encampment.

One means of easy access to a theoretical moon base would be one of the zaniest concepts outlined in Stuart’s book: a so-called “space elevator,” stretching up from the Earth’s surface and covering more than 62,000 miles of vertical height. At the far end of the elevator’s massive cord (which would have to be produced from an economical “super material” like graphene and anchored at an as-yet-unconstructed ocean base) would be a counterweight keeping it taut. “Just as the momentum of [a ball attached to a length of string] keeps the string taut” when it’s swung, Stuart writes, “so the motion of the counterweight provides the necessary tension in the space elevator cable.”

Stuart estimates that the construction of such a colossal elevator (which he likens to the fantastical Great Glass Elevator of Roald Dahl) would probably cost upwards of $10 billion, and it would undoubtedly require a spirit of global camaraderie that at present does not exist. But if such an audacious project ever did get off the ground (so to speak), it could revolutionize space exploration, conveying a fresh spacecraft out of the atmosphere every single day. And “anything launched from the cable above geosynchronous orbit would already be traveling at greater than orbital velocity,” Stuart notes, “making trips to the Moon and Mars a cinch.”

What exactly the future holds for lunar adventure—a visit to the far side, the creation of a moon base, the construction of an unprecedented elevator, or none of the above—is at the moment unclear. But between First Man, the upcoming Apollo 11 jubilee, and the resurgence of crewed spaceflight as a pillar of American political rhetoric, the Moon is very much in the conversation again, and seems now more than ever that it is not a question of if humanity will ever return to the lunar landscape, but a question of how, and when.