I spent a few days walking the dry, shelly beaches where the Colorado River Delta meets the Gulf of California. I was with a group of scientists, all paleontologists and geologists of one stripe or another, who had gathered in this remote part of Mexico six years ago to learn more about what happens to the remains of living things. Scientists who work at the scale of geologic time tend to think about life’s leftovers—hollow shells, bits of bone, shed leaves—not as detritus but as potential future fossils. Modern-day settings, like the delta plain that crunched beneath our feet, give us useful ways to understand the processes that control how the remnants of life enter the rock record, that ledger of past worlds.

We were certainly an odd bunch, walking every few yards and then pausing to sift through a pile of shells or inspect a seabird thighbone. As a paleontologist specializing in whales, I had more than a passing interest in a worn, sun-bleached skull. I recognized immediately that it belonged to the vaquita, a species of porpoise found only in the northern reaches of the Gulf of California. Its eyes are airbrushed in shadows, ringed by a white seam, like a solar eclipse. It’s among the smallest cetacean species—you could cradle one across your open arms, although you would be hard pressed to find one, because there are only a few dozen, if that many, still alive.

The vaquita’s skull fit into my hand and felt light and delicate, like a paper lantern. There were rows of tiny, spadelike teeth on a blunt snout. It was a specimen not unlike this that first alerted scientists to the vaquita’s existence, a discovery so recent that John Steinbeck didn’t mention the animal in his legendary 1951 natural history, Log from the Sea of Cortez.

In the early 1950s, two skulls found on beaches near San Felipe, in Baja, were taken to the University of California, Berkeley, where they caught the eye of Seth Benson, a professor of zoology and curator at the on-campus Museum of Vertebrate Zoology. Turning to the collector, Benson declared, “You’ve got a new species of porpoise on your hands.” He would know. Benson himself collected more than 13,000 specimens, of many kinds of animals, and no doubt had studied the scores of porpoise skulls in the Berkeley collections. In the original 1958 paper announcing the discovery, the authors lamented they had “tried to obtain specimens of the entire animal, but have been unsuccessful thus far.” The vaquita would remain elusive; to this day there isn’t a decent photograph of one alive.

Over the years scientists learned a bit from carcasses that fishermen collected. Females are longer than males. Analyses of the growth layers in vaquita teeth yielded an estimated life span of 21 years. Gestation lasts about 10 to 11 months. In the water, vaquita are mostly observed alone or in small groups. When they breathe at the surface they roll forward quickly, hardly making a splash. DNA from skin samples of dead vaquita bycatch show little genetic diversity. That’s significant because genetic variation is the fuel of evolution; without it, populations on the edge have less resilience in the face of disease and other threats.

The vaquita is a child of the ice ages, according to the story written in its DNA. There are six porpoise species all around the world, and the family trees that can be constructed from particular gene sequences suggest that the vaquita split from other Pacific Ocean porpoises in the past five million years. This is notable for students of deep time because it includes the start of major changes in global climate around the beginning of the ice ages, with the repeated march and retreat of ice sheets in both the Southern and Northern hemispheres. Indeed, the vaquita’s limited range in the Gulf of California seems typical of a species that evolved in response to the retreat of northern glaciers (cool waters out, warm waters in), which isolated the species in this now-altered habitat, known as a refugium. 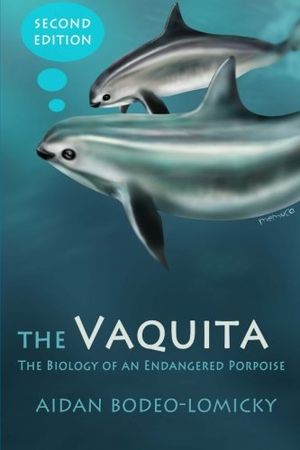 The Vaquita: The Biology of an Endangered Porpoise

The Vaquita is a book about the world's most endangered marine mammal, the Vaquita porpoise. Less than 100 remain, and this book provides information on their biology as well has how to help them. Complete with original illustrations and poetry, this book is great for anyone interested in the natural world.

Having adapted to that radical disruption, the vaquita is nonetheless imperiled today, for several reasons. The Colorado River no longer reaches the Gulf of California most of the time, its flow and course stemmed by major dams in the American West. The entire landscape of the Colorado River Delta today looks nothing like the lush flood plain that flourished only a century ago. Which is why the paleontologists in our field study on the delta were so interested in the acres and acres of clamshells, from hundreds or thousands of years ago, shaped into elongated mounds, called cheniers, by a river flow that is no longer there. We can only guess at what a free-flowing Colorado River meant for the vaquita.

Yet the most serious threat to the vaquita is that for the last few decades its fate has been tied to that of the totoaba, a large fish that also lives only in the gulf and is at the center of a highly lucrative black market trade. A single totoaba swim bladder, when stretched and dried, fetches thousands of dollars in Asia, where it’s coveted for its purported medicinal properties. A global supply chain for the bladders, likely linked to criminal enterprise, feeds demand for the tissue, which has only increased as the totoaba itself has become endangered. Baja fishermen go after the totoaba with gill nets, now illegal, which also rake in the vaquita.

Scientists have sounded the alarm about the precipitous decline in the vaquita population, which has plummeted by more than 90 percent in the past five years alone. The current best estimate places the number at about 30 individuals. That’s the entirety of the species. Researchers arrived at this number not by observing the animals directly but by placing instruments underwater and listening for the vaquita’s distinctive biosonar clicks.

The options for rescuing this enigmatic mammal are dwindling fast. One possibility is to capture some females and males and place them in floating sea pens, or within a cordoned refuge. But the stress of captivity can be hard on porpoises, and it’s far from clear whether any vaquita could even be secured in the first place—not one ever has. Another idea is to use U.S. Navy-trained bottlenose dolphins to wrangle vaquita into sea refuges, but that’s also a gamble—trained dolphins have never done so before. The obvious step of ridding the gulf of gill nets requires a level of law enforcement that has apparently not been achieved, perhaps because of criminal influence on the totoaba trade. The vaquita’s newly visible champions on social media, including the actor Leonardo DiCaprio and the billionaire Mexican philanthropist Carlos Slim, have raised the animal’s profile and amplified existing work by nonprofit conservation groups and government organizations in the United States and Mexico. Unfortunately, even the impressive speed of tweets and internet petitions may not be enough—we may have just months to save this species.

The extinction of a species at sea is far more anonymous than on land. We may never know the last vaquita. It doesn’t take much to imagine the final one spinning in a gill net at the hands of a disappointed fisherman, or washed up on an uninhabited shoreline, food for gulls. The only other cetacean species to have gone extinct at human hands is the Yangtze River dolphin. Only half a dozen specimens rest in museums, including the Smithsonian, which houses the skull and jaws of the animal representing the discovery of the species, in 1918. Less than 100 years later, our only evidence for its disappearance is not having seen it—absence is the evidence. No one has definitively documented a living Yangtze River dolphin since 2002, and the last detailed scientific survey, in 2006, could not find any. Aquatic extinctions happen silently, beneath the surface, lacking any clear semaphore. For species in this realm, the end is indeed a whimper.

I wince every time I hear mention of the vaquita: During that field trip in Mexico, I came across four vaquita skulls on the beach. That would have been a substantial cache, if you consider there are only 14 vaquita specimens total in U.S. museum collections. But my colleagues and I did not have a permit to collect marine mammal remains, never mind remove them from the country, and I decided against entangling the group in the red tape of obtaining such permission at the last minute. At that time, there were many more vaquita alive than there are today. Still, it was the kind of missed opportunity that keeps me awake at night. The animal is so poorly known, and vanishing so quickly, its skeleton may be the richest source of data about the species that we’ll ever have. But how many more chances will we have to gather the remains of a vaquita for posterity? I hope somebody who knew what he or she was doing collected those skulls.

Extinction is an everyday currency for paleontologists. We tally the fossil traces of bygone species in a rock formation and calibrate their duration through geologic time, all to figure out how evolution works over millions of years; we don’t usually have to contend with a species approaching oblivion at this moment. Handling the fossils of the vaquita’s extinct relatives—skulls with odd fissures and bumps, longer beaks, strange jaws—I can see that porpoises of the long-distant past were different from porpoises today, the vaquita included. That puts me directly in touch with the reality that their worlds were different, too.

I wish I could say that I know how the story of the vaquita ends. I do know that not a single whale species went extinct in the 20th century, despite massive whale hunting. Now, in the 21st century, we face the possibility of another cetacean species disappearing on our watch. I’m reminded of the urgency to collect every scrap of information we can about all life-forms, whether they are extant, extinct or on the brink. We need tangible vouchers, the stuff we keep in museums, that show us how the world once was if we want to make predictions about how the world will turn out.

Nick Pyenson is curator of fossil marine mammals at the Smithsonian Institution's National Museum of Natural History. His book, Spying on Whales: The Past, Present, and Future of Earth’s Most Awesome Creatures will be out next year from Viking Books.