The Unabomber cut a swath both deep and narrow through the country’s psyche. His attacks were frightening and unpredictable, but, in the later stages of his 17-year terror campaign, he emerged from the shadows as a vengeful philosopher bent on changing history. He was a riveting, infuriating figure. I wanted to write about him, but not from the police point of view and not speculatively, when nobody yet knew who he was. He finally came into focus, for me, at his trial. I covered it, and in the end surprised myself by thinking that he had been deprived of his day in court.

Before he became the Unabomber, Theodore J. Kaczynski was a gifted mathematician. Raised in and around Chicago, he went to Harvard on scholarship at age 16 and, in 1967, became the youngest assistant professor of mathematics ever at the University of California, Berkeley. But mathematics was unimportant to him, he later said. It was just a game he was good at. Indeed, he fiercely resented his mother’s insistence that he was a genius. In 1969, Kaczynski abruptly fled academia.

“Ever since my early teens I had dreamed of escaping from civilization,” he later told an interviewer. He built a bare-bones cabin in the woods near Lincoln, Montana, where he lived without electricity or indoor plumbing. He hunted and gardened and kept to himself, eating squirrels, rabbits, parsnips, berries. In 1978, he began sending parcel bombs to scientists, businessmen and others whose work enraged him.

Law enforcement dubbed him the “Unabomber” because his early targets were universities and airlines. Sixteen bomb attacks, killing three people and injuring 23, were ultimately attributed to him. Tracking him was one of the longest and most expensive manhunts in FBI history. Kaczynski’s bombs were handcrafted, impossible to trace, and became more sophisticated and deadly with time. 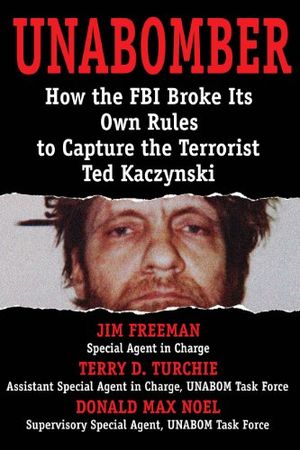 Unabomber: How the FBI Broke Its Own Rules to Capture the Terrorist Ted Kaczynski

This is the story of how the FBI broke its own rules to catch the notorious Unabomber, who had randomly killed and maimed people while leaving a cold trail of terrorism for sixteen years.

Percy Wood, the president of United Airlines, was an early victim. He suffered burns and cuts over much of his body. Janet Smith, a secretary at Vanderbilt University, sustained shrapnel wounds and burns to her face. Hugh Scrutton, a computer store owner in Sacramento, California, was the first target to die from his wounds. That was in 1985. Thomas Mosser, an advertising executive, was murdered in his home in North Caldwell, New Jersey. Gilbert Murray, a timber industry lobbyist, was killed in Sacramento. David Gelernter, a computer science professor at Yale, lost the use of his right hand, suffered severe burns and shrapnel wounds, and had his right eye damaged.

In 1993, Kaczynski began writing to newspapers, taunting his victims, and threatening new targets. He wrote in the name of “an anarchist group calling ourselves FC.” Remarkably, using an offer to “desist from terrorism,” he prevailed upon the Washington Post and the New York Times to publish, in 1995, a 35,000-word essay called “Industrial Society and Its Future.”

“The Industrial Revolution and its consequences have been a disaster for the human race,” it began. The “manifesto,” as it became known, was a dark, densely argued treatise, in 232 numbered paragraphs, on the malignant role of technology in modern society. Individual freedom and autonomy were being eliminated by centralized systems of control. These systems needed to be destroyed, “wild nature” restored. The Freedom Club (FC) targeted “the technophiles [who] are taking us all on an utterly reckless ride into the unknown.” For those who opposed this future, the manifesto was a call to arms. The Unabomber Manifesto: Industrial Society and Its Future

In 1971 Dr. Theodore Kaczynski rejected modern society and moved to a primitive cabin in the woods of Montana. There, he began building bombs, which he sent to professors and executives to express his disdain for modern society, and to work on his magnum opus, Industrial Society and Its Future, forever known to the world as the Unabomber Manifesto.

Its ideas were taken seriously in some quarters. James Q. Wilson, a conservative social scientist, wrote, “If it is the work of a madman, then the writings of many political philosophers—Jean-Jacques Rousseau, Tom Paine, Karl Marx—are scarcely more sane.” A book version of the essay sold several thousand copies.

But publication of the manifesto led, as the FBI had hoped it would, to Kaczynski’s capture. His brother, David, a youth counselor living near Albany, New York, read it and recognized the language, the arguments. David loved his brother, though they were estranged. After months of anguishing, he shared his suspicions with the authorities. Federal agents obtained a search warrant and, on April 3, 1996, arrested Ted in the doorway of his cabin. (The handcuffs they used now reside in the Smithsonian National Postal Museum. The United States Postal Service played a significant role in investigating Kaczynski's series of mail bombs.)

Inside the cabin, they found bomb-making materials, a live bomb ready for mailing, the original manifesto manuscript, and 40,000 pages of journals recording Kaczynski’s daily life, his bombing campaign, his anger. The Freedom Club, it emerged, had a membership of one.

Kaczynski was put on trial in federal court in Sacramento in late 1997. The government sought the death penalty, breaking an agreement made with David Kaczynski to forgo it. David and their mother, Wanda, came to court each day, but Ted, sitting a few feet away, never acknowledged them. His demeanor in court was polite, attentive, calm. The shaggy hermit whose picture had been broadcast around the world now looked and acted like a mild professor. I sent him interview requests through an Oregon anarchist who visited him in jail. I never got a reply.

A jury was selected, but the trial proper never started, for Kaczynski was locked in a procedural battle with his lawyers, the prosecutors and, ultimately, the judge about his defense.

His court-appointed lawyers believed his best chance of avoiding the death penalty was to plead not guilty by reason of insanity. Being labeled mentally ill was Kaczynski’s worst fear. He tried to fire his lawyers in favor of a private attorney willing to let him risk execution to present his case—a political argument, relying on the manifesto, explaining why he thought his actions were necessary. The judge denied the change of counsel. A psychiatric evaluation ordered by the court diagnosed Kaczynski as paranoid schizophrenic. Kaczynski asked to represent himself. The judge denied this request, too. Checkmated, Kaczynski pleaded guilty rather than hear himself represented at trial as insane.

He had been denied his day in court, I thought, because nobody in power wanted to hear his political message. His lawyers, all talented idealists, just wanted to save his life. The prosecutors had begun to doubt that they could achieve their goal—a death sentence—at trial. The judge did not want to see his courtroom become Kaczynski’s soapbox. By pathologizing the defendant’s radical dissent, each faction avoided the outcome it feared. On May 4, 1998, Kaczynski received four life sentences.

I started hearing from him soon after my report on the trial appeared in the New Yorker. Seeing his return address, by then a federal prison, in my mailbox gave me a start. It seemed he was considering an appeal of his case, and he thought some of my reporting might help. I didn’t think so, but he kept writing. His letters got increasingly cranky, and the idea of his using the manifesto in a blazingly political trial seemed to fade. I lost interest, and the last thing I got from Kaczynski was a parcel. My wife and I blanched at the sight of it. I took it out to the stairwell to open it. There was no danger, of course, so what was I thinking—to save the kitchen cupboards, just in case? The parcel contained, as I recall, a stack of court documents.

Kaczynski, now 75, lives in a “supermax” prison in Florence, Colorado. He remains a prolific writer, corresponding in longhand with hundreds of people, and producing essays and books. Technological Slavery, a collection, was published in 2010. Among the customer reviews on Amazon, a majority have given it five stars. In a report for the 50th reunion of his class at Harvard, Kaczynski gave his occupation as “prisoner.” Under “awards,” he listed his life sentences.

William Finnegan is a staff writer for the New Yorker. He is the author of five books, including a Pulitzer Prize-winning memoir, Barbarian Days: A Surfing Life.