The wine-making bug bit Alejandro “Alex” Castillo Llamas early on. His parents, migrant workers from Mexico, had settled in Napa, California, finding work in a vineyard, when he was just nine years old. He labored alongside his family, harvesting the grapes from the fields.

Later, as a young man in the early 2000s, he worked a year at two of the country’s finest dining restaurants—the three-Michelin-star French Laundry in the Napa Valley and New York City’s Per Se. Back in Napa, he worked in the vineyard, the tasting rooms and cellars at several wineries. One afternoon at a family barbeque in 2008, after acquiring a small batch of grapes, he bottled his first wine and shared it around the table. His uncle Oscar Llamas, the owner of several auto body shops in town, took several sips of the new vintages and agreed to front him the money to start his wine business. Just five years later, Llamas Family Wines, with Alex as the head winemaker, was producing world-class wines.

Llamas Wines is a uniquely interconnected family affair. Even though Alex and Oscar do not have their own fields to grow the grapes, they buy fruit from the vineyards where other members of the Llamas family are employed picking the grapes. The years of dedication, working in the wine industry proved critical to their standout success in the industry. “Knowledge is paramount,” says Alex Llamas. “Any time, you see someone come in and work quickly, efficiently, and with technique and knowledge, you want to retain them. And I think that was really the case with the Llamas family.”

With his start in the restaurant business, Llamas acquired his deep knowledge from the ground up—business operations, hospitality and finally, how to select the fine wines that his customers appreciated.

Proud of his Mexican roots and his family’s achievement in the U.S., Alex Llamas' label reflects that heritage. Each bottle carries the signature logo depicting the pincher legs and a curved tail of a scorpion, a symbol that recalls the cattle brand his grandfather Jesus Llamas—“Papa Chuy” to the grandkids—had used on the small ranch that he owned in San Nicolas de Acuña, near Lake Chapala in Mexico. “Every single Llamas Family wine bottle does bear the scorpion,” says Llamas. “And that is a kind of subliminal message to honor where I come from, so that I can better understand where I’m going.”

A baseball cap adorned with the Llamas Family Winery logo along with his grandfather’s cattle brand recently joined the collections of the Smithsonian’s National Museum of American History. The material goes on view later this month in a display titled “Deep Roots” as part of a fresh rethinking of the museum’s much-visited “Food” exhibition. “Deep Roots” takes a look at how men and women of Mexican heritage, who have long provided the labor and backbone of the wine industry, are now reshaping it as professional agricultural consultants, winery owners, vineyard owners, scientists and entrepreneurs in the industry.

Gustavo Brambila landed in California in the mid-1950s when he was about three years old. His father was a bracero, one of the Mexican contract workers that worked the orchards of Napa during the 1940s and 50s. “The community was small when we came here,” he recalls of the Mexican families with children attending middle school in Napa. In the early 1970’s, Brambila started to attend food science courses at the University of California, Davis. With an old Spencer Labs microscope, probably dating from the 1920s, that was given to him by a geology professor, Brambila looked at everything from grapes to grass under the lens. His budding interest in science would soon lead to viticulture, and his training in the lab and in chemistry opened doors in the growing wine industry. He had also made a promise to his mother.

“I was going to find out about a bottle of juice that my father had taken to the house for me to taste,” he says.

"It was grape juice that he had been crushing that same day. . . I thought it was the best, you know, sweetest tasting grape juice I ever tasted. . . I put the cap back on the bottle and put it in the refrigerator. So about two weeks later, my mother screamed because her refrigerator door had blown wide open and everything in it was broken. So that bottle exploded in the refrigerator. . . . I told my mother I don't know what happened here, but I'll find out and I'll let you know.”

Brambila had many mentors, including the Mexican fieldworkers or cellar workers that he met through his father, who was a vineyard worker, or through his harvest picking jobs. But eventually he would meet and work for the renowned winemaker Mike Grgich, whose California white wine famously bested the French samples at the 1976 Paris Tasting. It was that signature moment that would propel the emergent California wine industry onto the international stage. Grgich hired Brambila to work with him as he set up his own winery, Grgich Wines, in 1977.

“In 1980, the [Paris Tasting] French judges . . . wanted to re-do the same judging,” says Brambila. “Not with the same wine, but a different wine that was from the same wine maker. … They took a bottle of 1977 Chardonnay to re-taste in Chicago, and the result was the same. It received first place again, and so I can give myself credit for making that 1977 chardonnay.”

“Because of that I was right in the middle of that and I didn't realize it. So all of a sudden all Latino individuals, Mexicans, from around the actual vineyards, working in the fields, took notice and that was the only time that I can recall that I truly had made a profound difference in perceptions about Mexicans and Latinos in the eventual higher profiled wine Industry,” says Brambila.

By 1997 Gustavo had opened his own winery, Gustavo Wine, one of the first wineries to offer a tasting room in the city of Napa to a new younger clientele. There, he would pour and feature his own wines, creating a new model for the industry and making wine more accessible to the urban area. Today, Gustavo is a world-renowned wine consultant, well known for his entrepreneurial spirit and the viticulture knowledge that expands to his vineyard management company. And of course, he was able to tell his mother that it was a buildup of gas from fermentation and the lack of a release valve in the grape juice bottle that caused the door to blow off her refrigerator. Brambila recently donated his microscope to the American History Museum.

Growing up in Jalisco, Mexico, family and heritage was very important to Amelia Ceja, who reveled in the bounty of her grandparents’ farm and gardens, picking fresh fruits, vegetables and herbs to cook with her abuelita.

She arrived in Napa at age 12 with her father, Felipe Moran Martinez, who was employed by a vineyard management company planting vines for the Mondavi Winery. As a young woman in high school and college, Amelia engaged in pickets and marches to voice the struggles farmworkers faced. Amelia and her father worked with the United Farm Workers, alongside Cesear Chavez, Dolores Huerta and other activists, to organize better working conditions and pay for vineyard workers. She has been a vocal advocate for farmworkers ever since.

In the 1960s, she met Pedro Ceja whose family had also came from Mexico to work in Northern California’s burgeoning post-prohibition wine industry. The two married in 1980. After attending college in San Diego, Amelia and Pedro Ceja returned to Napa and Sonoma to be closer to family and to realize the dream of owning some family land. They pooled their resources, and in 1983 purchased land in Carneros in the Napa Valley. Her brother-in-law Armando Ceja worked at the nearby winery Domaine Chandon, and needed more Pinot Noir grapes. Will Nord, the vineyard manager, offered the Cejas a deal on the plants they would need to develop their first vineyard. Pedro and Amelia Ceja laid the foundation for the brand in 1999 and in 2001 launched the brand.

Today, Ceja Vineyards is a family affair. Armando Ceja manages the vineyard and is the wine maker. Armando’s daughter is now a budding winemaker and Amelia’s daughter and sons are also in the business. Amelia tirelessly markets the wine while remaining true to her commitment to environmental concerns and social justice causes.

But perhaps Amelia’s best talent stems from the knowledge and appreciation of fresh home cooking that she learned from her abuelita. At tastings she hosts at her home, she expertly pairs the Mexican dishes she prepares with wines from the Ceja Vineyards. She produces short cooking videos for the winery’s website, and shares the recipes for her dishes, especially the staple of Mexican households—the tortilla.

As a bride, Ceja had been gifted a handmade wooden press from her aunt, “Tia Tona” She brought it back from Mexico and used it both at home and for her cooking demos. Her last and final time that she used the press was during a demonstration at the Smithsonian, where she made tortillas. With great sentiment, Ceja cleaned the wooden press and then she donated it to the museum. It will now be on display with other objects that tell the story of Mexican and Tex-Mex food in the United States.

The exhibition, “Food: Transforming the American Table,” at the Smithsonian’s National Museum of American History in Washington, D.C., opens October 25, with new displays coming on migration and food, America’s brewing history, a history of diets and dieting, and the emergence of Mexican-American vintners. The American Food History Project oral history initiative collected the stories of 12 other Mexican-American vintners, which will soon be available to the public through the American History Archives Center. The Mexican Winemakers project received federal support from the Latino Initiatives Pool, administered by the Smithsonian Latino Center. 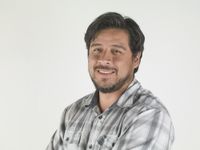 L. Stephen Velasquez is a curator in the division of cultural and community life at the National Museum of American History. His research interest includes Latino history and identity, material culture, food ways and immigration and migration history.