Regarded as “guardians of the Black narrative,” the artworks greet visitors to NMAAHC’s Heritage Hall 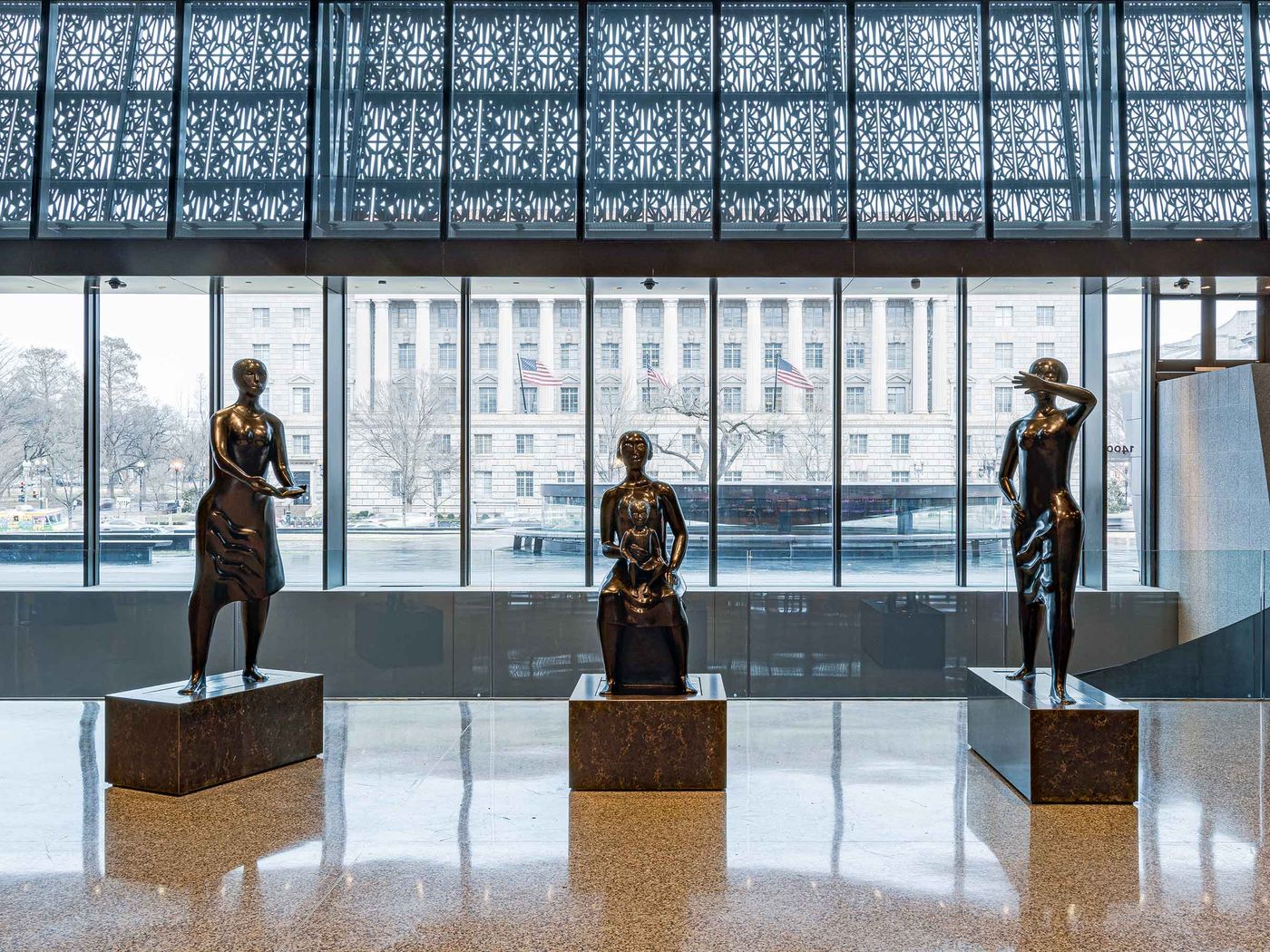 The sculptures, Rejecting Injustice, Offering Life and Offering Education, by the acclaimed artist Elizabeth Catlett have long been on the minds of curators at the Smithsonian’s National Museum of African American History and Culture (NMAAHC).

The three bronze works had been displayed in a Washington, D.C. building where local civil rights activist Mary Church Terrell once spearheaded a campaign to desegregate the department store cafeteria that once filled its walls. Even though the store operated in a mostly Black community, it maintained separate eating establishments. Terrell, who headed up enforcement of the city’s anti-discrimination laws, integrated the building in 1952.

By the early 2000s, with the department store long gone, new owners had renamed the building Terrell Place, commissioning Catlett to honor the role the activist had played in the city’s historic struggles for civil rights.

NMAAHC acquired Catlett’s sculptures in 2016, but between conservation and the pandemic, the curators searched for the right time to put them on exhibit. The time is now, says the museum’s Deputy Director Kinshasha Holman Conwill. “I look at them as guardians of the Black narrative and when we long ago were first trying to figure out where they would go, we thought these are so powerful wherever we put them.”

The sculptures representing Catlett’s impassioned devotion to the dignity, struggle and uplift of her people now hold pride of place in the museum’s expansive Heritage Hall, the building’s atrium and first floor entryway. Here, too, are works by other renowned Black artists Chakaia Booker, Sam Gilliam and Richard Hunt that speak to Catlett’s desire to create art that focused on civil and human rights. Catlett’s oeuvre often depicts the strength of women, Conwill says.

The life-sized sculptures are three iterations of women, servicing humanity, combatting injustice, bearing up in their role as caregivers, and portraying the value of education. “We want people to learn about the various roles Black women have played in our society, dealing with issues of equity, as mothers and caregivers,” says Conwill.

It seems fitting that these sculptures from Catlett would find a prominent home in D.C. where the artist was born in 1915, but it’s also strikingly heartbreaking that it is a place where she felt she didn’t really belong. Catlett’s activism made her an enemy of the state and for 40 years, she lived as a citizen of Mexico.

“I want museum patrons to appreciate Elizabeth Catlett’s facility as an artist and as an activist,” says Tuliza Fleming, the museum’s interim chief curator of visual art.

Catlett’s narrative as an international artist is one with many milestones. She received her bachelors from Washington, D.C.’s Howard University, but only after her acceptance into a program at Carnegie Institute of Technology was rescinded when school administrators learned she was an African American. At the University of Iowa, she became the first woman to earn an MFA in sculpture. Her mentor was Grant Wood, who told her to “take as her subject what she knew best.” In 1946, she traveled to Mexico on a fellowship from the Taller de Gráfica Popular, an influential print collective committed to education and social causes, and was soon immersed in the culture of the famous Mexican muralists, Diego Rivero, David Alfaro Siqueiros, and José Clemente Oroszco. Two years later, she took up her studies with José Ruíz and Francisco Zúñiga at Mexico’s Escuela Nacional de Pintura. In 1958, she became head of the sculpture department at Escuela Nacional de Artes Plásticas in Mexico City.

But Catlett’s association with the left-leaning Taller print collective, would raise concerns back home. The U.S. had declared the organization a “communist front organization,” barring its artists from entry, including Catlett, who by 1962 had renounced her U.S. citizenship and become a Mexican citizen. She married a Mexican artist, Francisco Mora, and had three sons.

She made the choice to be an “other.” Like James Baldwin or W.E.B. DuBois before her, Catlett was a Black U.S. expat on foreign soil, and welcomed in a way she hadn’t experienced at home. In a 1971 interview, she spoke of her ambiguous relationship with her birth country. “It’s true, from the legal point of view I am a Mexican citizen; but how will some consul, some ambassador, some bureaucrat, some president be able to erase the color of my blood, erase my twenty-some years of life as a Black citizen of the U.S. where I went to segregated schools, where I travelled in the back of the bus reserved for Blacks, where I sat in stations, in theatres, in restaurants in the section that said negroes only!”

After her departure from the U.S., she doubled down in the struggle for liberation—for all people. We catch glimpses in her figures of Mestizo and Black Mexicans and the indigenous peoples of American lands. Her works embody her own dual citizenship, depicting the open interpretation of women figures that transcend the boundaries of nations. “She lifted up women whether they were the unnamed farm worker or whether they were heroic figures like Harriet Tubman. She imbued her figures with extraordinary dignity and strength,” Conwill says.

These “images of dignity” carry the influence of her first husband Charles White with whom she shared similar beliefs about what art could be. Though they separated, their legacies rely on lithographs they both completed in the 1940s depicting the value of the African American image, whether creating works about the sharecropper, domestic servants, or everyday women. Catlett and her art grew out of the civil rights and Black arts movements. Hers with other artists of the time was based in a Black aesthetic. Though Catlett was looked at through the lens of her activism and her strained ties with the U.S., she would still ship art for exhibitions to the states. In 1971, she obtained a special visa to attend her one-woman show at the Studio Museum in Harlem.

Elizabeth Catlett, a mother, educator and activist, is known to have said: “Among other things, I learned that my sculptures and my prints had to be based on the needs of people. These needs determine what I do.”

The museum’s sculptures were completed in 2003, late in her career, and depict women as pivotal to any type of liberation. Rejecting Injustice depicts a woman shielding her face and has been interpreted as the stance of a women fighting off aggressors while protesting. Offering Life, the sculpture of a mother with a child in her lap, captures the theme of maternal care that Catlett revisited often. Offering Education, a representation of a woman offering a book, places women in the central role of educator, as they are so often both the educators and nurturers of young children.

In 2002, Catlett regained her U.S. citizenship and spent her time living in New York and Mexico. Until her death in 2012, Catlett remained steadfast in making art for the people while making women central to her work. We still exist in a space where women like Elizabeth Catlett are serving the needs of our society by placing women as central figures in artworks, not for their beauty or physical form but to depict the grit and grace of women who are struggling to survive, who are doing the work of uplifting society, and who are fighting for the people’s rights. The Catlett sculptures have found a home in Heritage Hall serving as a fitting introduction to an artist whose important work highlights the continual fight we all must do to achieve rights and dignity for all people.