For some fans of popular Asian cinema, American remakes are automatically sacrilegious insults to intelligence and taste. I am not so doctrinaire. While it’s true that films like The Ring and The Grudge pale compared to the Japanese originals, Martin Scorsese managed, with The Departed, to create something new and compelling by reinterpreting the Hong Kong movie Infernal Affairs in his own style while retaining its clever core conceit. Spike Lee is the kind of director who may have been able to do the same with the 2003 Korean film Oldboy, but, as a longtime Spike Lee fan, it pains me to say this isn’t the case.

Like all the above mentioned films, the new Oldboy came to be thanks to the efforts of the Korean-American producer Roy Lee, whose company, Vertigo Entertainment, was founded on the perhaps cynical idea that Americans won’t go to see movies with subtitles. Vertigo buys the remake rights from Asian distributors, then pitches them to Hollywood studios as readymade scripts that are already proven hits in their home territories and only require a bit of tinkering to do the same in the US.

It is upon these twin assumptions—an untapped, subtitle-averse audience unfamiliar with the source material and the need to make changes to suit American tastes—that the new version of Oldboy falters. Park Chan-wook’s original film combines a lurid, neon lit visual palette with a charismatic, deadpan performance by Choi Min-sik as the protagonist Oh Dae-su. In keeping with its origins as a Japanese manga comic, the plot is lean and propulsive and ends with a shocking twist. Its meticulously choreographed violence, somehow both operatic and cartoonish, is best exemplified by a famous fight scene in which Dae-su dispatches a couple of dozen thugs in a hallway using only a hammer. Judging by reviews at the time, its discomfiting mix of violence, visual beauty and dark humor left critics feeling as impressed and battered as the those hammer-beaten thugs. It won the Grand Prix at the Cannes Film Festival and spawned an enthusiastic worldwide cult audience. When the Freer|Sackler screened Oldboy earlier this year as part of a Park Chan-wook retrospective at the Korean Film Festival, one audience member proudly told me it was her sixth time seeing it.

In other words, Oldboy already has a following. Many people who normally wouldn’t see a foreign film have seen it, so there's a lot riding on any remake of it. 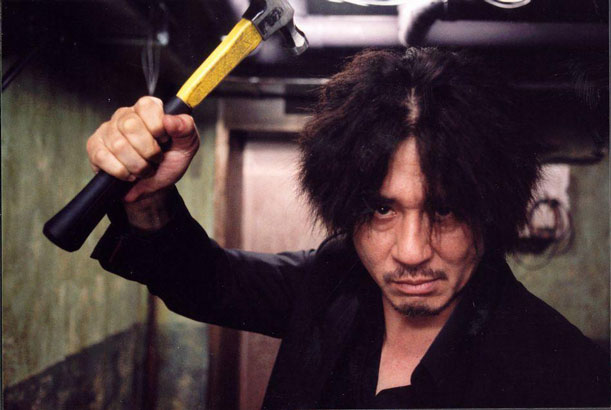 Oh Dae-su (Choi Min-sik) prepares to exact his revenge in one of the most famous scenes from the original Oldboy, directed by Park Chan-wook.

Park’s film is designed to make you uncomfortable: he wants you to be repelled and fascinated at the same time, to laugh at things you know you shouldn’t. Spike Lee achieved a similar feat with Bamboozled, and, like Park, he’s an inventive stylist willing to take risks, so I can see why he might have been a good choice to direct the remake. The problem is that what draws fans to the original Oldboy is that it eschews convention. Park has no time for traditional character development, or even for making them sympathetic. All we know about Oh Dae-su is that he gets epically drunk one night, misses his daughter’s birthday, and wakes up in a locked room. When he emerges 15 years later, he is a creature of pure vengeance, so lacking in humanity that he tries to sexually assault Mi-do, the kind young woman who comes to his aid.

Although Lee claims he wasn’t thinking about altering Oldboy to suit American tastes, he doesn’t seem to be on the same page with his screenwriter, Mark Protosevich, who, in a Buzzfeed interview, discusses the necessity of doing exactly that.

For example: because sympathetic characters with clear backstories and motivations are considered essential, the new Oldboy begins with several scenes detailing just how much of an alcoholic jerk Josh Brolin’s Joe Doucett is before his imprisonment: he drinks on the job, curses out his ex-wife, and hits on a client’s wife during a business meeting. Once imprisoned, he follows the well-trodden Hollywood path to redemption by quitting drinking and writing letter after letter to his daughter promising to be a better man. He at first nobly spurns the tentative advances of Mi-do’s counterpart, Marie Sebastian, who in the new version has been transformed from a sushi chef to a social worker with, naturally, a history of addiction to explain her urge to help people like Joe.

This sort of Screenwriting 101 backstory replaces momentum with explanation and leaves little room for the black humor that saves Park’s original from becoming too bleak. In fact, one of the oddest failings of the new Oldboy is its complete lack of humor. Where Park acknowledges—indeed embraces—his film’s outlandishness, Lee presents it with a straight face, which, considering all the violence involved, makes for grim going.

Lee’s Oldboy did poorly with audiences and critics alike. Given the lack of fanfare or publicity surrounding its release, I suspect that both Lee and the studio knew they had a dud on their hands. I may be naïve, but a solution to a problem such as this might be for studios to simply release foreign language films with the marketing and promotion budget they deserve. They may discover that Americans aren’t so afraid of subtitles after all.