The Revolutionary Role Mail Played in America’s Fight for Independence 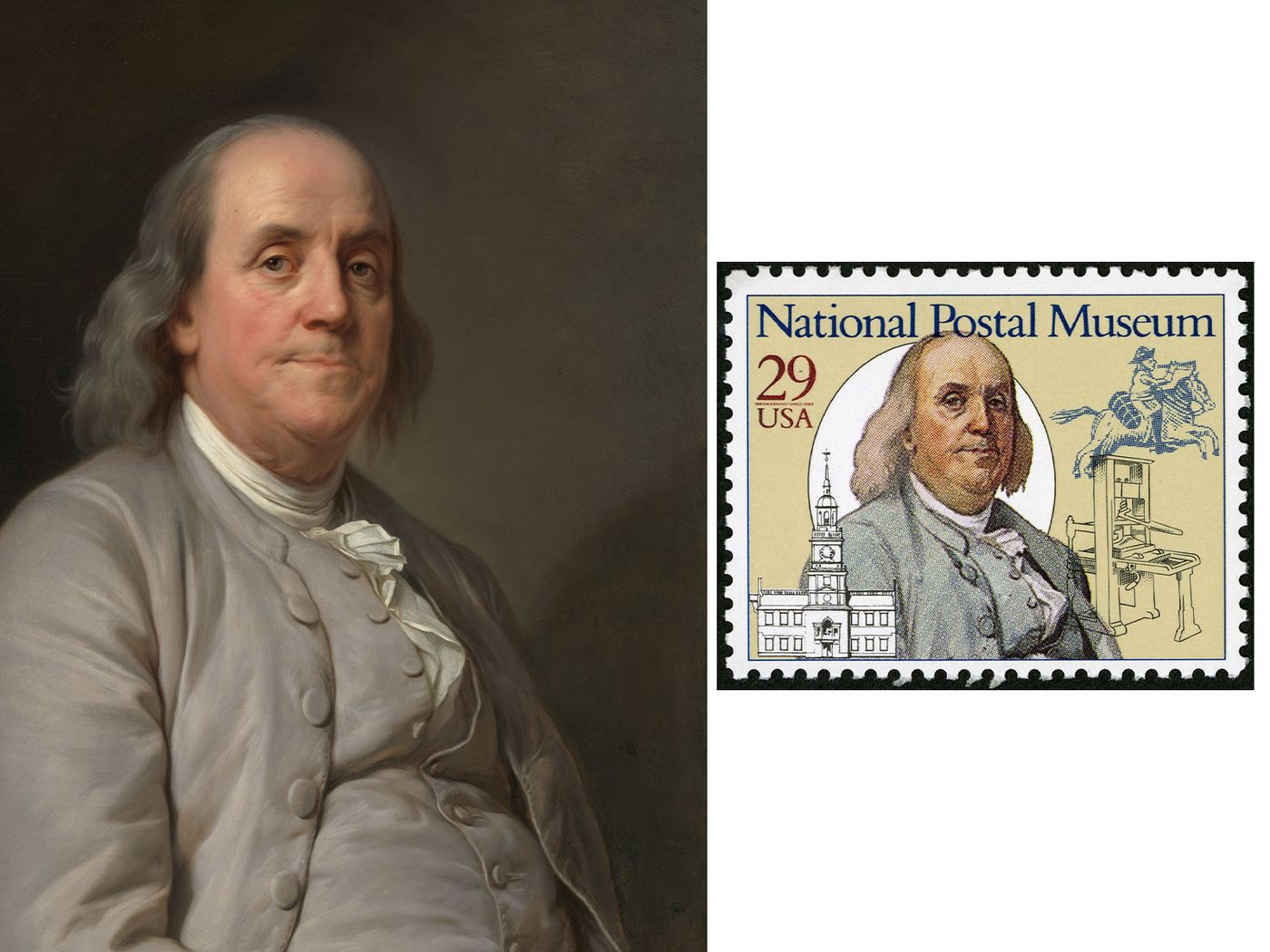 With the widespread adoption of email, paper mail for some has come to seem more an afterthought, junk to be tossed or set aside. Yet with a legacy that spans more than two centuries, the United States Postal Service (USPS) has long been the primary method of transmitting point-to-point messages. The agency is also the creator and distributor of the postage stamp. This token emblem, which indicates that postal fees have been paid, holds a historical place of prominence, accompanying messages both intimate and public.

In “Postage Pairings,” the latest episode of the National Portrait Gallery’s podcast Portraits, Daniel Piazza, curator of philately at the Smithsonian’s National Postal Museum, takes a look at some of the most historically significant portraits held in the Portrait Gallery’s collections that have been reproduced on postage stamps. The postal service, he points out, was indispensable to the American revolution, but it was originally established by the British crown.

“They didn’t really found it with the idea of fostering resistance,” Piazza reflects in conversation with the Portrait Gallery's director and podcast host Kim Sajet. “But over time, that was the effect. With the development of a postal network between the colonies, that facilitated communication and coordination between pockets of resistance that without this postal network might have remained more or less isolated. They might’ve just stayed stewing in their own little grievances of whatever they were angry about in Massachusetts or Virginia, and complaining to their lobbyists over in London, rather than joining up and making common cause. It really facilitated that sort of cooperation and transmission of ideas that brought about resistance to British rule.”

A relatively recent stamp, Sajet points out, bears a rather tetchy visage of Benjamin Franklin, who was both the first Postmaster General of the United States and the last royal postmaster general. The stamp, says Piazza, was issued in 1993 to commemorate the opening of the Smithsonian’s National Postal Museum, and was based on a portrait of Franklin that Joseph Siffred Duplessis painted in 1785. At the time, Franklin was representing the fledgling United States, still at war with the armies of King George III, before the French court. (The same image of Franklin is on the $100 bill.) Sajet notes that Franklin’s irritable expression might reflect the fact he had recently been accused of being a spy for the British.

Other graphic features of the stamp indicate the seminal role Franklin played in the formation of the post office. Prior to Franklin’s intervention, Piazza explains, the American colonies were far more interested in keeping their individual epistolatory ties with the British crown than in communicating efficiently with one another.

A century-and-a-half after Franklin’s death, President Franklin Delano Roosevelt was another leader who looked to the post office to unite Americans during a time of war. A two-cent stamp issued shortly after Roosevelt died in 1945 features a photo of FDR taken in 1933, and was printed in a striking shade of red. The stamp was part of an effort to create an international color-coding system that would allow postal workers in countries using different languages and currencies to ascertain that proper postage had been applied to each piece of mail.

FDR was an avid philatelist, says Piazza, and recognized the stamp’s visual power. Early in his presidency, FDR began working with the post office to strategically design stamps to send messages into American homes that would promote his New Deal and his National Recovery Administration. At a time when radio had not yet reached every household, (between March 1933 and June 1944, Roosevelt famously addressed the nation via radio 30 times, in a series of speeches on various topics that came to be referred to as his “fireside chats”) FDR’s commissioned stamps drove home his messaging.

Sajet and Piazza also discuss the history of inclusion and diversity on the U.S. postage stamp and how honoring women or people of color has grown from a trickle to a stream. “The first woman on a U.S. postage stamp isn’t even American at all,” Piazza says. “It’s Queen Isabella [of Spain] who appears on a series of stamps in 1893 for the Columbian Exposition.”

In 1936, Susan B. Anthony was honored with a stamp commemorating the 16th anniversary of women’s suffrage—the reason for the observance of the random anniversary is because 1936 was a presidential election year, and FDR believed the Anthony stamp would help shore up his support among women voters.

Booker T. Washington became the first African America on a postage stamp in 1940. George Washington Carver followed in 1948, but not until the approach of the bicentennial in the 1970s did the USPS create the Black Heritage series, which continues to this day.

Portraits, Piazza tells Sajet, make good stamp designs because they communicate a substantial amount of information in a small space. But Sajet cautions that because traditional portraiture was expensive, the artform excluded many important Americans in their own eras. Exactly, says Piazza, who notes the USPS has tried to remedy this problem by commissioning artists’ conceptions for two subjects of whom there are no portraits—Jean Baptiste Pointe du Sable, the fabled founder of Chicago and Benjamin Banneker, the 19th-century naturalist, astronomer and mathematician.

“Too much of a reliance on portraits can mean either that people get left out, or that you resort to fabricating things in order to represent individuals,” Piazza reflects. “Neither one of those is particularly great.”

Elsewhere in the Smithsonian Podosphere

Sidedoor recently celebrated the arrival of the first images from the James Webb Space Telescope in mid-July by retelling the story of its precursor, the Hubble Space Telescope. In “Hubble Trouble,” host Lizzie Peabody talks with National Air and Space Museum curator Samantha Thompson, Hubble: Imaging Space and Time author Robert Smith, astronaut Jeffrey Hoffman, and astronomer Sandra Faber about how the observatory turned an initial failure into long-term success. Soon after HST’s launch in April 1990, those awaiting its images discovered that its primary mirror had been polished into the wrong shape, resulting in severely degraded image quality. A December 1993 servicing mission corrected the problem, and four subsequent servicing missions—most recently in May 2009—to maintain extant systems and install new instruments have kept HST useful. The observatory has gone on to be regarded as a spectacular success, remaining in service to this day, having far outlived its planned design life.

Air/Space oversees a reunion of sorts of the offspring of the 500 tree seeds that Apollo 14 carried to the Moon in 1971. “Let It Grow” catches up with Dave Williams, the planetary scientist who designed the database that gives the locations of the 67 known first-generation “Moon Trees,” planted from the seeds that went to the Moon and back.

Back in March, Collected—a podcast from the National Museum of American History’s African American History Curatorial Collective—wrapped up its six-episode first season focusing on Black Feminism with an inspiring and wide-ranging discussion called “The Future of Black Feminism Re-routed.” “I think that a Black feminist future is a future of love,” writer and activist Alexis Pauline Gumbs tells hosts Crystal Moten and Krystal Klingenberg. “I think I know that in a Black feminist future, people are really eating well, people are really intentional and life-giving in their relationships with each other, people really get to experience dignity in their everyday lives. That's what a Black feminist future looks like to me and there's infinite forms that can take.”

Last month’s ARTiculated: Dispatches from the Archives of American Art asked guest curator and native Hawaiian artist Lehuauakea to solve an intriguing problem of taxonomy. In “Weaving and Shaping Native Art Today,” Lehuauakea examines the work of two Indigenous octogenarian artists—Native Hawaiian lauhala weaver Katherine Kalehuapuakeaula “Lehua” Domingo and Hopi ceramicist Al Qöyawayma—and considers whether the artworks can be classified as traditional, contemporary, or none of the above.