The Multiple Arts and Artistries of the Inimitable Laurie Anderson

A Hirshhorn retrospective opens with ten new works from the pioneering artist, composer, poet and musician 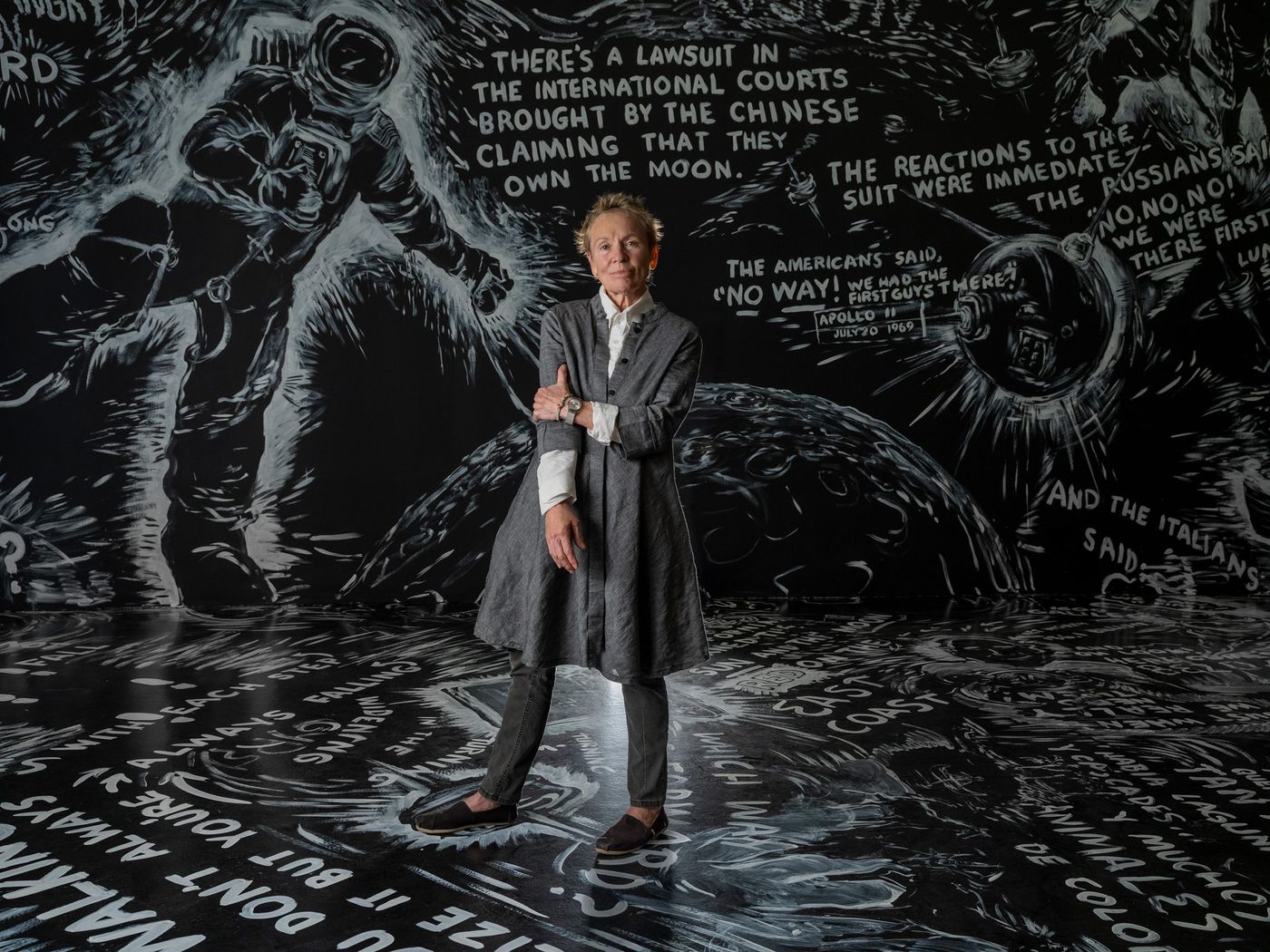 Laurie Anderson’s singular artistic path has included books and movies, and an influential performance style whose loops, tapes and style has informed generations.  Courtesy of the artist, photography by Ron Blunt

Before she became famous with her spooky electronic single “O Superman” 40 years ago, Laurie Anderson had been a successful conceptual and performance artist, who had studied with the artist Sol LeWitt and the composer John Cage and been included in several international gallery shows.

She continued her varied artistic interests even as she recorded a dozen albums and extensively performed worldwide. Only now is she getting her largest U.S. exhibition of her artwork to date in “Laurie Anderson: The Weather” at the Smithsonian’s Hirshhorn Museum and Sculpture Garden, reopened now following a 17-month Covid-19 hiatus.

Anderson’s singular artistic path has included books and movies, and an influential performance style whose loops, tapes and style informed generations after her. She was half of New York art royalty with rocker and poet Lou Reed, who she met in 1992 and married in 2008. How to fit all of her work in a museum? Anderson didn’t try. Instead, she informed curators that she’d create as many as ten new pieces to fill the museum’s circular second floor alongside key examples of some of her past ventures.

“The Weather” begins with “Drum Dance,” a clip from her 1986 concert film Home of the Brave, at the height of Anderson’s success following the ascent of her single, “O Superman,” to No. 2 on the UK singles charts. She appears alone on stage, dancing to percussion she creates herself, by striking parts of her white jumpsuit into which she had affixed electronic drum heads.

So hold me, Mom, in your long arms

In your automatic arms.

Paintings, sculpture and films are part of the survey, that will also include a couple of performances from Anderson (she has already presented two pieces there before the delayed exhibition opened).

“We all think of Laurie in terms of her music, her experimentation in technology and mostly of her ideas,” says museum director Melissa Chiu. “This exhibition really shows a different side of Laurie.”

And like the weather after which it was named, the exhibition has been changeable over its years of planning, as the artist would call up curators with another new idea or direction.

“It’s freakish,” says Anderson, now 74, to be finally surrounded by work from nearly half a century. “But it’s really wonderful. Because you know, you think, you have this brand-new idea, then you think: I had that same idea 40 years ago. For me, this had many of the same themes I would say that I had as a young artist. So it’s a very eerie thing to think: I’m an innovator—not really. But there are things that fascinate. You give them different shapes.”

During a press walkthrough of the (mostly) finished exhibition of so many different media, Anderson says, “I’ve always been an artist that’s always worked in a lot of different forms.” The challenge, she says, was “putting stories in a museum. So you’ll see them in all kinds of varieties.”

Known for her mesmerizing and often amusing narratives, an excess of words and phrases are hand painted in white over the floors and walls of a striking black gallery room. Titled Four Talks, the piece is officially described as “four sculptures and site-specific wall painting [with] ambient sound.” But mostly there are the swirling words and phrases, which like a lot of her work, couples wisdom and humor. One such adage among many: “If you think technology will solve your problems, then you don’t understand technology and you don’t understand your problems.”

Amid that dizzying, disorienting space, the sculpture of the dark parrot can be heard muttering in an electronic voice. “He talks for about an hour,” Anderson says of the work titled My Day Beats Your Year (The Parrot), adding, “it’s great fun to write for an animatronic parrot… He does have a lot to say.”

Remaining silent among the whirl of words is an even larger sculpture The Witness Protection Program (The Raven)—a brooding bird that pays tribute to her late husband, the musician and songwriter Lou Reed, who died in 2013. The piece reference Reed’s 2003 Edgar Allan Poe-themed album The Raven.

“This show is dedicated to Lou and also to John Cage, so you’ll see references to Cage all over the place,” says Anderson, who speaks fondly of making recordings with the experimental composer in the months before he died in 1992. “It was one of the great experiences of my life just to talk with him.”

His influence may have led to the title of the exhibition. One of the scrawled messages of Four Talks is a quote from Cage that speaks to his longtime collaboration with choreographer Merce Cunningham. Their relationship was “less like an object and more like the weather. Because in an object, you can tell where the boundaries are. But in the weather, it’s impossible to say when something begins or ends.”

Like Cage, Anderson worked in the world of experimental music, devising various electronically treated violins—affixed with magnetic tape playback capabilities or synclavier interfaces—that are on display behind glass in the exhibition.

An interactive The Headphone Table, imagined in 1978 and recreated in 2017, invites visitors to sit and cup their hands to their ears, with elbows on the table, to hear—or be part of—a humming that rumbles through the heavy table. Anderson describes the experience as “a lot of low-end sound that comes up through your bones so you’re literally the conductor of the sound.”

The Headphone Table recalls an interactive chess table currently on view upstairs in the museum in a Marcel Duchamp survey show, an artist with a similarly playful and insurrectionist intent.

“It’s also in a way a piece about loneliness,” Anderson says of her humming table. “And how you’re really in your head most of the time and it’s kind of a miracle that we get to be in touch with people at all.”

But Anderson went out of her way to reach out in a piece, Habeus Corpus, first commissioned in 2015 by the New York Armory. It features the figure of Mohammed el Gharani, a Saudi goat herder who became the youngest detainee at Guantanamo Bay when he was sent there at age 11.

The adult el Gharani tells the story of eight years imprisonment, torture and no official charges against him. He does so in a video that is projected on a monumental sculpture, giving it an eerie, oversized presence.

“Because Guantanamo detainees couldn’t come to the United States, we built a life-size statue of him the size of the Lincoln Memorial, and we built a studio in Ghana where he’s living, and he sat there for several days, still, and we bounced his image from the studio in Ghana to New York as he was sitting there,” Anderson says. “He was basically a live sculpture.”

In addition to the projection, she says she hopes to do a live Zoom event with el Gharani during the Hirshhorn run. “I talk to him every day, and I told him you’re going to be in the nation’s capital. And he’s very excited about that,” Anderson says. “The privilege of being an artist is that one of your best friends is a goat herder from Saudi Arabia.”

Projections are used on much smaller clay figures, 19 of them, sharpening knives in Citizens. And there is a similarly-sized projection of Anderson doing her own 2009 performance of From the Air.

In another striking use of projection, the 2012 Sidewalk beams down on piles of shredded pages from Dostoevsky’s Crime and Punishment.

There is craft, too, as when she weaves editions of The New York Times with the same day’s front page from the China Daily News.

The oldest things in the show are photographs from clever performance pieces such as Institutional Dream Series from the early 1970s in which she naps at several public locations to see how it affects her dreams.

But the most unexpected thing in The Weather may be a room full of eight accomplished monumental contemporary paintings. “One of the things I like about paintings is there’s really nothing you can say about them. There are no words in this room,” Anderson says. “That’s a great relief to me. I love painting for that reason.”

Certainly, stories and words have dominated her career, seen in a recent project in which her written work was fed into a supercomputer by the Australian Institute for Machine Learning, and then mixed with text from the Bible. “They sent a 9,000-page version of this to me a few months ago,” Anderson said. “It’s so creepy! It’s the Bible according to me, which is horrible. It’s the bloody end of the world.”

The 2021 Scroll, as the result is called, is on display, as is an updated book of her encoded dreams, whose pages flip by courtesy of an electric fan.

Devising the exhibition, Anderson says her original intent was to pack it with much more of a message. “'The Weather' was initially much more about climate,” she says. “And as you know, these things can get very strident when you start talking about social issues. It’s tough. So those things evaporated more and more as the work developed.”

COVID meant not only that the show got delayed a year, but some of the planned virtual reality installations had to be abandoned, says associate Hirshhorn curator Marina Isgro, who helped organize the exhibition. “This show has been in the works for four years and has gone through several iterations.”

And those iterations may not be over, Anderson indicates, gazing at one of her large oil paintings in particular. “I’m going to come back this afternoon and take some of the white out of this one!”

“I’ve always dreamed of putting my things in a museum and then coming up and changing it,” she says with a devilish grin. “I have a tough time with endings and I have tough times with beginnings. This is why I never have intermissions in my performances. Then you have to have two beginnings and two endings.”

"Laurie Anderson: The Weather” continues at the Smithsonian’s Hirshhorn Museum and Sculpture Garden in Washington, D.C. through July 31, 2022.