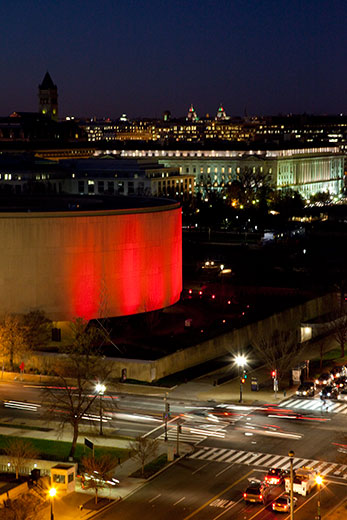 All around the world, in honor of World AIDS Day, famous buildings and landmarks are being turned red—the official color of AIDS awareness—to promote the cause. The list of red structures includes the London Eye, the Empire State Building and the Sydney Opera House. And this year, for the very first time, a Washington, D.C. landmark will be illuminated red: Smithsonian's own Hirshhorn Museum.

"RED approached us originally, because they were looking for iconic buildings in different cities, and the Hirshhorn is very distinctive," says the museum's spokesperson Jenny Leehey. The 60,000 square foot circular structure was designed by noted architect Gordon Bunshaft and opened to the public in 1974. "Anytime that we can emphasize the architecture of our building, because it's so unique, we like to do that," says Beth Skirkanich, Production Coordinator at the museum. "Especially for a good cause."

World AIDS Day is an annual event, first observed in 1987, designed to raise awareness of HIV/AIDS and show support for people living with the disease. This year, the specific aim in mind is ending mother-to-child transmissions of AIDS by 2015.

The Hirshhorn will help promote this goal by having its exterior illuminated a vivid red from this evening to midnight, with the help of 12 exterior lights that weigh 125 pounds each. "It's going to be half the building that's lit, the East and Northeast sides" says Skirkanich. "So from the Mall or from 7th street, you'll get a wonderful view." The museum team is working with an outside events company to install the lighting, the same group used for previous special events such as After Hours.

Because the lighting used for After Hours is primarily projected onto the building's inner courtyard walls, though, lighting the outside provides a new challenge. "The curvature of the building probably does make it a little more challenging," Skirkanich says. "and red is actually a difficult color to light, because it's very dense, so it's hard to make it really pop."

To maximize the effect, the team has installed panoramic light fixtures that can be manually focused. The lights can also mix various colors to achieve precisely the right red color featured in the AIDS campaign. "We've never done this before, so we're not sure exactly how it'll turn out, but we're hoping that it'll be really vibrant," says Skirkanich.