The precise recipe for the musical genius behind the hardest working rock-n-roller of our times is lately of interest to the fans of Bruce Springsteen. Parsing his 2016 autobiography Born to Run and his current one-man blockbuster Springsteen on Broadway, devotees are in search of the source and inspiration for that hip-shaking, fist-pumping, soul-soaring, heart-breaking, tear-inducing, story-laden song catalog.

And for those of us, myself included, who have lost count of the number of times they’ve stepped into his world at arenas and open-air venues, not just to listen to, but to become one with his songs, Springsteen’s story is well-known. A child whose grandmother loved him with such ferocious passion that her death left his five-year-old self grief-stricken. A skinny kid who coaxed his mother to take out a loan for his first guitar. A young man who battled to find a reservoir of compassion for his father’s dark depression, and then grew up to fight the disease’s afflictions himself. And that dark and stormy night when Clarence Clemons blew through that bar room door on the Jersey shore to make rock ‘n’ roll history. 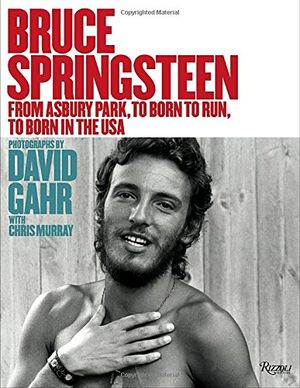 Bruce Springsteen: From Asbury Park, to Born To Run, to Born In The USA

Now comes a new compendium of images, Bruce Springsteen: From Asbury Park, To Born To Run, To Born In The USA featuring the work of long-time music photographer David Gahr and includes more than 150 images, spanning the formative years 1973 to 1986 of the Springsteen opus.

Gahr was a music photography luminary. His 1968 book, The Face of Folk Music, registers a who’s who of the American folk music scene, and his images graced the album covers for Smithsonian Folkways Recordings. Columbia Records hired Gahr to shoot the cover art for Springsteen’s second album The Wild, The Innocent and the E Street Shuffle and the two became friends with Gahr chronicling much of the musician’s next decade of performances, some of it published, but a trove of work remained largely unseen.

After Gahr died in 2008, his estate called upon Chris Murray, a long-time collector with a vibrant passion for of fine art music photography, to examine the artist’s archive. Surrounded by hundreds of contact sheets of the years Gahr worked with Springsteen, Murray, who is the editor of the new book, recalls the moment: “I felt like I had the Holy Grail of rock ‘n’ roll photography in my hands.”

Murray, the proprietor of Washington, D.C.’s Govinda Gallery and one of the organizers of the 2010 Smithsonian exhibition “Elvis at 21: Photographs by Alfred Wertheimer,” has an enviable collection of more than 800 images, that began with the purchase of a portrait of Yoko Ono and John Lennon by Annie Leibovitz. Over the years, Murray has collected such singularities in the genre as Daniel Kramer’s portrait of Bob Dylan used as the album cover for Bringing It All Back Home and Gered Mankowitz’s Classic Jimi of Jimi Hendrix.

“The fact that the overwhelming majority of these photographs have never been seen is also remarkable,” says Murray. “They are like a time capsule in a way, revealing to us so many of this great musical artist’s pastimes, a personae we know so well, but yet has so much to reveal.”

Here’s a 24-year-old Bruce in 1973, in Chuck Taylors and a singlet, sunglasses perched jauntily on his head and taken on a dock of the New Jersey shore. This was the year that his first releases Greetings From Asbury Park, N.J. and The Wild, The Innocent and The E Street Shuffle debuted. Only 25,000 copies sold in Greetings’ first year, a remarkable footnote for an album that contains some of his most time-honored anthems.

Here’s the famous 1975 performance at New York City’s famed music hall the Bottom Line, an epic moment that as Springsteen says, “finally put us on the map as big-time contenders.” A woman in the audience reaches out to him, her arms raised in a kind of prescient rapture that hard-core fans will recognize; and there’s Clarence dressed all in white, blowing that resonate saxophone wail. This was a definitive moment for the band. “You could feel the whole thing taking off,” Springsteen wrote in his autobiography. “We got born again there.”

Here are intimate moments of Bruce hitchhiking in the snow, or sprawled on a bed, seductively gazing at the camera. And here he is sheepishly grinning, surrounded by women on a storefront sidewalk in Red Bank, New Jersey. “Every photo in the David Gahr collection is taken with film,” says Murray. “There is a quality that is so beautiful and so textured.”

And over time, the well-known evolution of the band comes to fruition. There’s the original drummer, Vini “Mad Dog” Lopez, known to show up at gigs bruised and scratched, but who lost his place to Max Weinberg. And there’s the first keyboardist, David Sancious, who left the band when he got his own Columbia contract. A 1980 shot of the band includes the now deceased Danny Federici, who was inducted posthumously into the Rock and Roll Hall of Fame in 2014.

And there is Clarence—the Big Man joined the band in 1972 and played until his death in 2011. There he is in Detroit in 1984, probably playing that long “Dancing in the Dark” solo on his tenor sax while Bruce reaches down into the audience to select his ritual dance partner. And there the duo are in Cleveland, Ohio, in 1980, and again in Philadelphia in 1984, back-to-back, sax player and guitar man, like the brothers they were.

Murray says he hopes soon to organize an exhibition of the images. A gallery in Ireland has been in touch. The book, he says, “documents a unique relationship between a great visual artist and a great musical artist. Two brilliant and creative individuals whose paths crossed forever in their work.”