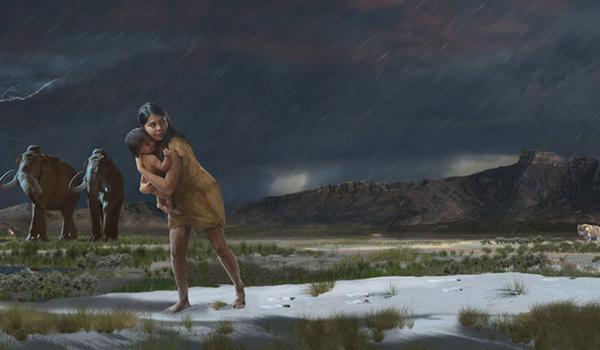 Ten New Things We Learned About Human Origins in 2020

The pandemic this year changed a lot about the world and the way we lived, including the way that paleoanthropologists, archaeologists and other fieldwork-based researchers operate. This year, we want to highlight the different lines of evidence that are used in human origins research—so we’ve organized our ten highlighted discoveries into four broader “lines of evidence” categories. Since many scientific articles are years in the making, despite our inability to get out in the field, a lot of critical and exciting discoveries were still revealed in 2020.

Fossil Footprints Reveal Where and How Modern Humans Traveled

While we may not be able to move around much this year, three studies on fossil human footprints published in 2020 revealed a lot more about where ancient humans traveled and how they moved together in groups. Unlike body fossils, footprints (and other “trace fossils”) offer us a snapshot of an exact moment in time, or at least a very short time interval.

In December, the longest trackway of fossil human footprints was announced by Matthew R. Bennett and colleagues. The 11,500- to 13,000-year-old, 0.8 mile-long (1.3 km) trackway, roughly the length of 14 football fields, was made by a woman or a juvenile male, holding a two- to three-year-old toddler while on their journey through a rough and dangerous landscape.

How do we know? Every so often the adult footprints pause and are joined by a child’s footprints. The footprints go in a straight and definite line, and pretty fast, indicating a deliberate end target; they then return in the opposite direction, this time without the child.

But did Pleistocene humans always travel solo? Heck no.

Another 2020 announcement, this one in May from Chatham University’s Kevin Hatala and colleagues (including Briana Pobiner), analyzed the largest fossil footprint assemblage in Africa. Sometime between about 6,000- and 19,000-years ago, a group of modern humans walked through a mudflow in the shadow of Tanzania’s Ol Doinyo Lengai volcano. The 408 footprints left behind by 17 individuals help us to understand not only the heights and weights of the footprint-makers, but using statistical analysis based on a large data set of modern human feet, the team determined that the walking group probably consisted of 14 female and 2 male individuals. Comparing this to ethnographic data from modern forager groups such as the Hadza in Tanzania, the team concluded that the footprints were probably made by adult females with occasional visits or accompaniment by a few adult males during a food gathering session.

Finally, footprints can simply reveal that humans were some place we didn’t know they were at that time, as Michael Petraglia and colleagues from the Max Planck Institute for the Science of Human History revealed when they took a look at 120,000-year-old human and animal footprints found on an ancient lake surface in a current Saudi Arabian desert. Before this discovery, the earliest evidence of humans moving into the heart of Arabia dated back to about 85,000 years ago.

While discoveries directly related to humans’ evolutionary journey are important, understanding how now-extinct primates survived, thrived and traveled across the globe is just as exciting.

In October, a team led by Nina Jablonski and Xueping Ji from Penn State University and Yunnan Institute of Cultural Relics and Archaeology respectively, found three new Mesopithecus pentelicus fossils, about 6.4 million years old, in Yunan Province, China. These late Miocene fossils indicate that this ecologically versatile and adaptable ancient monkey lived in Asia at the same time as apes. Modern colobines of Asia, the likely descendants of this species, have continued this trend by inhabiting some of the most highly seasonal and extreme habitats occupied by nonhuman primates.

Speaking of extreme, researchers now think monkeys rafted all the way across the Atlantic. In April, Erik Seiffert from University of Southern California and colleagues announced a new tiny soup-can-sized fossil monkey species, Ucayalipithecus perdita, based on four fossil monkey teeth that they found deep in the Peruvian Amazon. This newly discovered species belongs to an extinct family of African primates known as parapithecids, which are now the third lineage of mammals that made the more than 900-mile transatlantic journey from Africa to South America, most likely on floating rafts of vegetation that broke off from coastlines during a storm. Sounds improbable, but monkeys can survive without access to fresh water if they get enough food—like fruit that could have been growing on a tree and part of the vegetation raft.

Finally, in September, a team led by Hunter College’s Christopher C. Gilbert announced another new fossil primate: this time from a fossil molar of an ape, Kapi ramnagarensis, about 13-million-years old and found at Ramnagar in northern India. This new species pushes the fossil record of gibbons back by about five million years, and provides significant information about when the ancestors of today’s gibbons migrated to Asia from Africa—which was around the same time ancient great apes were undertaking the same migration.

No list of important finds in human evolution would be complete without fossil evidence of hominins themselves, and this year the site of Drimolen in South Africa was the big winner.

First, in April, a team led by Andy I. R. Herries from La Trobe University announced new fossils of both Paranthropus robustus (DNH 152) and Homo erectus (DNH 134) dating from between about 2.04 million and 1.95 million years ago, making these the oldest fossils of both of these hominin species. These finds demonstrate the contemporaneity of these two species at this site with Australopithecus africanus. DNH 134 pushes back the origin of Homo erectus by about 150,000 to 200,000 years.

And aspiring paleoanthropologists, check this out. Jesse Martin and Angeline Leece, who were both students attending a field school at Drimolen when DNH 143 was found in 2015, got to clean and reconstruct the skull. They had to hold the specimen, which consisted of more than 150 pieces of an approximately three-year-old child together, without coughing, sneezing, talking, and controlling their breathing—for up to 40 minutes at a time.

Drimolen seems to be the gift that keeps on giving us fossils, In 2018, the team found two more Paranthropus fossils, including the approximately 2-million-year-old DNH 155 adult male cranium (also found by a field school student Samantha Good). The analysis of this specimen led by Jesse M. Martin from La Trobe University was published this year in November, and especially against comparisons to other adult male Paranthropus robustus fossils from Drimolen and elsewhere in South Africa, suggests that differences previously ascribed to sexual dimorphism—differences between males and females—are actually examples of microevolution related to ecological change within this early hominin species.

Back to our theme of migration. (Can you tell we miss being able to, you know, go places?)

One of this year’s big announcements, in October, was the first definitive evidence of Denisovans outside of Denisova Cave in Siberia, in a location about 1,740 miles away in Tibet. A team led by Dongju Zhang from Lanzhou University wanted to test the hypothesis that an approximately 160,000-year-old partial jawbone found by a Buddhist monk in Baishiya Karst Cave might be the remains of a Denisovan. First, in 2019, the researchers used a new method based on protein variations to identify the jaw as Denisovan; but the novel method and unknown exact location of where the jaw was found in the cave led to continued skepticism. Determined to find more evidence, Zhang and her team returned to the cave. They agreed to excavate only in winter in sub-zero temperatures and at night to avoid disturbing worshippers—and were rewarded by the finding of Denisovan mitochondrial DNA from the cave sediments that dated to between 100,000 and 60,000 years ago, and possibly as recently as 45,000 years ago. The research team also found charcoal from fires Denisovans built in the cave, as well as stone tools and fossil animal bones.

Also in October, a team led by the Max Planck Institute for Evolutionary Anthropology’s Svante Pääbo and Diyendo Massilani analyzed an approximately 34,000-year-old modern human woman’s skullcap found by miners in 2006—the only Pleistocene fossil currently known from Mongolia, as well as a modern human male skull from Tianyuan Cave in China that was about 40,000 year old. They found that both fossils contain DNA from both Neanderthals and Denisovans. What does this evidence mean for interactions and migrations among Eurasian Pleistocene populations? Well, it was… complicated. Because the Denisovan DNA sequences in these fossils are not found in present-day Oceanians (Australian Aboriginals and New Guineans), but they are found in present-day East Asians, modern humans must have met and exchanged genes with two different populations of Denisovans—one in Southeast Asia, and one in mainland Asia. This suggests that Denisovans once inhabited a pretty large area of Asia. Looks like it’s time to find more Denisovan fossils. Fingers crossed!

In the meantime, museums are continuing to work on digitization programs so that scientists can study and have access to collections regardless of pandemics or long distances. The National Museums of Kenya and the Smithsonian Institution have already been working to make 3D reconstructions of fossils available to researchers from around the world. If you’ve also been missing visiting museums, like us, the Smithsonian has created a way to view fossils from the safety of your own home. While we wait for more Denisovan fossils to be discovered, you can use this VR technology to see through a Neanderthal’s eyes and get up close and personal with some mammoths.

About the Author: Briana Pobiner leads the National Museum of Natural History’s Human Origins Program’s education and outreach efforts and manages the Human Origins Program's public programs. Her research centers on the evolution of human diet (with a focus on meat-eating), but has included topics as diverse as human cannibalism and chimpanzee carnivory. Her favorite field moments include falling asleep in a tent in the Serengeti in Tanzania while listening to the distant whoops of hyenas, watching a pride of lions eat a zebra carcass on the Kenyan equator, and discovering fossil bones that were last touched, butchered and eaten by one of her 1.5-million-year-old ancestors. Read more articles from Briana Pobiner

About the Author: Ella Beaudoin is a Smithsonian paleolithic archaeologist whose research interests span from cultural adaption and resistance to colonialism, to early hominin cultural evolution and landscape use. She has conducted fieldwork in the U.S., Kenya and South Africa.
Read more articles from Ella Beaudoin