Take a Walk Through These War-Torn Ancient Cities 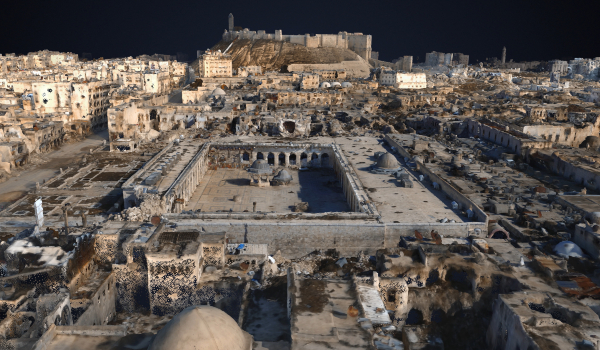 The exhibition presents the possibility that 3-D models (above: a digital rendering of Aleppo following the 2012 civil war in Syria), and the information extracted from them can be used for future restoration projects. Arab World Institute, Paris/Iconem

The ancient city of Palmyra in Syria, a UNESCO world heritage site, was a major trading center in the Roman Empire. For centuries it stood as a testimony to the grandeur of the ancient empires that passed through it. Then, following the ISIS occupations of 2015 and 2017, major parts of this rich site were turned to rubble. The terrorist group then distributed images of the fallen monuments as propaganda, showing off its ideology of devastation.

The same happened to Aleppo, another city in Syria and to Mosul in Iraq. Heritage sites all throughout the region have fallen victim to civil war and violent conflict, which—in addition to killing thousands of people—erased centuries-old historical and cultural data.

An exhibition currently on view at the Arthur M. Sackler Gallery, “Age Old Cities: A Virtual Journey from Palmyra to Mosul” is transporting audiences to those sites through an immersive virtual experience. By collecting data, footage and information, the Arab World Institute, in collaboration with Iconem, UNESCO and Ubisoft have digitally reconstructed these sites to spread awareness about the critical importance of preserving history.

Viewers can walk through immersive, large 3-D reconstructions of the Souk (market) of Aleppo, stand in front of the Temple of Baalshamin in Palmyra and watch as the Great Mosque of al-Nuri’s signature minaret in Mosul is virtually reconstructed. The exhibition also presents historical photographs of the structures, video interviews with people from the cities and a VR component that was developed in partnership with video game company Ubisoft.

“Age Old Cities doesn't intend to provide solutions but rather to raise issues regarding the future of world heritage,” says the show’s curator Aurélie Clemente-Ruiz, who is with the Arab World Institute. “New technologies make it possible both to remind people of the beauty of monuments now gone, and to consider their future.”

Over the past six years, Iraq and Syria have witnessed major political and military upheavals that have torn these nations apart. Since 2003, close to half a million lives have been lost and millions more displaced. The destruction of lives was not the only consequence of this catastrophe, however. Built culture, in the form of monuments and ancient cities, was lost; erasing invaluable history and robbing future generations of an opportunity to explore the past through these locations.

Although violent conflict occurs elsewhere in the region and even the world, these three sites are emblematic of the different threats to heritage. “By choosing these sites, we could create real storytelling to explain what's happening on each site,” says Celemente-Ruiz. “The context is really different between ISIS, the Jihadists, civil war and even collateral damages.”

Unlike most traditional exhibitions, the majority of this show is entirely digital; the artifacts are rendered visually by the technology. This is a powerful tool that serves a double purpose—creating an immersive experience, and collecting a database of information for future reference. In the process of collecting footage for the exhibition, Iconem, a startup that specializes in the digitization of endangered cultural heritage sites, has now amassed libraries of 3-D models and mappings of still-intact monuments.

“This database of information is crucial,” explains Bastein Varoutsikos, Iconem’s director of development. “People will use these 3-D models, extract information from them and use this information for the restoration process.”

First appearing in Paris, the Smithsonian’s National Museum of Asian Art, which includes the Freer Gallery of Art and the Arthur M. Sackler Gallery, collaborated with the Arab World Institute to adapt the exhibition and bring its contents to audiences in Washington, D.C. Having recognized the show’s connection to the Institution’s mission, the museum’s curator Simon Rettig proposed bringing the “Age Old Cities” to the Smithsonian.

“We don't only increase and diffuse knowledge but we are also active participants in preserving and safeguarding cultural heritage,” says Rettig.

Following the earthquake in Haiti, the Smithsonian Institution began helping in situations of natural disaster or conflict, developing an initiative called the Smithsonian Cultural Rescue Initiative. Among the projects taken on is a reconstruction mission in Mosul, Iraq. The Mosul Museum, for example, was greatly damaged during the conflict with ISIS—statues were shattered, the infrastructure was demolished and the museum was at risk of collapse.

The team worked with locals to save what remained of the Museum’s collections, and to repair the damage to the building. “What we're doing is not only helping rebuild a museum or archeological site, we're helping rebuild the society and its cultural foundations,” says Richard Kurin, the Smithsonian’s Distinguished Scholar and Ambassador at Large. “That is so important.”

Using technology to place this destruction in front of an audience across the world, “Age Old Cities” serves as a reminder that the importance of cultural heritage is not limited to a specific nation. Instead, it is an issue of global importance.

Rettig hopes that this exhibition will resonate with audiences and have a tangible impact on this issue at hand. “I hope people will take a proactive role in telling our leaders that we need to support residents of those cities or cities elsewhere around the world,” she says. “Whether the destruction is caused by war or climate, we need to help them.”

“Age Old Cities: A Virtual Journey from Palmyra to Mosul” is on view at the Arthur M. Sackler Gallery of the Smithsonian's National Museum of Asian Art through October 25, 2020. Currently, to support the effort to contain the spread of COVID-19, all Smithsonian museums in Washington, D.C. and in New York City, as well as the National Zoo, are temporarily closed. Check listings for updates.