From the ancient Dorset people, who populated the Canadian Arctic more than a millennium ago, to modern day Inuits living in coastal Greenland, people up north have long had to adapt to changing temperatures. Now that the science on climate change is more definitive than ever, people around the world are considering how higher temperatures and rising sea levels will affect where they live. To address those concerns, Bill Fitzhugh says people should look to those northern people.

Fitzhugh, director of the Arctic Studies Center at the National Museum of Natural History, has been studying the effects of climate change on northern cultures since the 1960s. Fitzhugh’s new book, Maine to Greenland: Exploring the Maritime Far Northeast, which he co-authored with Wilfred Richard, a research collaborator at the Center, explores how people are adapting to the lowest ice levels in at least 8,000 years. “There has never been so much Arctic Ocean ice-free during summer time,” Fitzhugh says.

Fitzhugh believes that people around the world should look to “Northern cultures as potential models for better use of the environment."

The term Eskimo refers to the people who existed before the year 1500. Inuit refers to people who have lived since then. "A lot of Eskimo adaptations that developed over the last several thousands years,” Fitzhugh says, are still in use. For example, Inuit people continue the tradition of dog sleds and sealskin clothing, both of which can perform better in cold weather than some modern equipment.

Above all, Fitzhugh says, in light of climate change, people should look to Inuit people as a model for how humans should interact with nature. “Judicious use of resources…not killing too many animals, using policies for hunting that maintain the population base,” Fitzhugh says, “all these things are things that the northern cultures have successfully done for thousands of years.”

Predictions for how climate change will impact the world tend to focus on the future, but for the Inuit people the future is now. Warmer temperatures have made hunting harder because cold-weather animals have moved away and traveling by ice is less reliable. Also, a decrease in sea ice will lead to more Arctic shipping, and with it, sound pollution, oil spills, competitive mining for natural resources, the introduction of invasive maritime species and other disruptions to life as people have known it.

“We need to look carefully at how we’re using earth resources and how we think about the future and how we’re going to adapt,” Fitzhugh says. “Prudence requires us to be a little bit more thoughtful and not just sit back and say, 'What the hell?' This is the Vesuvius kind of syndrome—whistle in the dark until the lava comes down on top of you.” 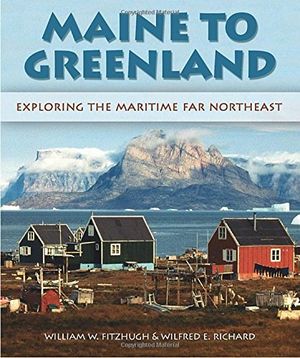 Maine to Greenland is a testament to one of the world's great geographic regions: the Maritime Far Northeast. For more than three decades, William W. Fitzhugh and Wilfred E. Richard have explored the Northeast's Atlantic corridor and its fascinating history, habitat, and culture.