Star Wars X-Wing at the Smithsonian 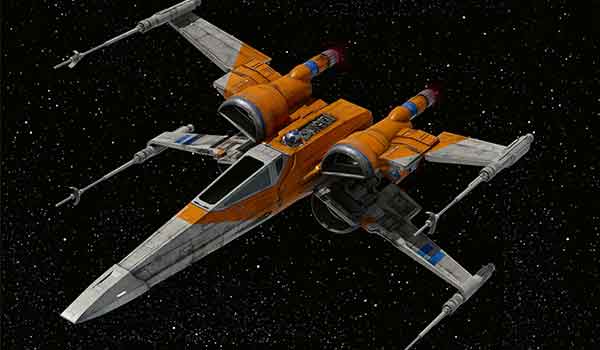 “Despite taking place a long time ago in a galaxy far, far away, Star Wars introduced generations of fans here on Earth to outer space as a setting for adventure and exploration,” says the museum's Margaret Weitekamp. Lucasfilm

As visitors observe the work of museum conservators in the Mary Baker Engen Restoration Hangar, they may hear the echoing refrain “Use The Force, Luke. Let go!” in the background of the cavernous facility, part of the Udvar-Hazy Center in Chantilly, Virginia, which recently reopened after being closed due to Covid-19. It might not be the voice of Obi-Wan Kenobi, but rather a wisecracking visitor staring at the Smithsonian’s newest artifact: an X-Wing Starfighter.

The famous but fictional spacecraft of the blockbuster Star Wars film franchise is on long-term loan to the Smithsonian from Lucasfilm Ltd. Fans can now watch while the X-Wing undergoes conservation at the Restoration Hangar alongside World War II aircraft and other historic airplanes and space vehicles. Late next year, the famed film prop will go on display outside the Albert Einstein Planetarium at the Smithsonian’s National Air and Space Museum on the National Mall in Washington, D.C.

“We are thrilled to have an X-Wing on exhibit,” says Margaret Weitekamp, space history chair at the museum. “It is a real screen-used vehicle from the 2019 film Rise of Skywalker. This display speaks to that crossover connection between people who are excited about space flight and have been inspired by the visions Star Wars has been putting out since 1977.”

The massive movie prop, which has a wingspan of 37 feet, is being cleaned and checked closely for any damage that may have occurred while in transit from Industrial Light & Magic, the LucasFilm division that created and built the X-Wing Starfighter. The full-size model was shipped in pieces and is being reassembled so it can be hung by rigging from the ceiling at the National Air and Space Museum building in Washington, D.C., in 2022.

“Star Wars is a lived-in universe,” Weitekamps says. “This is a battle-scarred X-Wing fighter. We want to distinguish between any scratches that occurred during shipping versus something that was built into the vehicle.

“I was on the floor looking at it and I pointed out a place where it looked like it had what pilot’s would call ‘hangar rash.’ That’s where you get scrape marks on the side of aircraft when they are moved around. I pointed it out to the conservator, who had a big smile and said, ‘No, that’s simulated. It’s part of the detail by the artist!’”

This is not the first time a Star Wars artifact has been displayed at the Smithsonian. In 1997, the museum exhibited props and costumes in the “Star Wars: The Magic of Myth” exhibition, which also explored the legendary themes of George Lucas, director, producer and screenwriter of the film franchise.

In 2016, the “Star Trek” television series and movies were featured in the “Boldly Go 50” display, which included the studio model of the Starship Enterprise. Other exhibitions have included displays on the public’s fascination with space travel through science fiction, including early literary works, film and television series.

The X-Wing Starfighter made its debut in the very first film in 1977, which has been redubbed Star Wars: Episode IV—A New Hope. Pilots used the spacecraft to battle Imperial TIE Fighters and attack the Death Star before it could deliver a lethal blow to a rebel base.

It has since been reprised in various forms in eight other Star Wars films, including the last one in 2019, The Rise of Skywalker. This model is a more advanced version of the first X-Wing Starfighter that zoomed across the big screen nearly 35 years ago. Apparently, even fictional attack spacecraft have to have technological improvements.

“This is a T-70 X-Wing,” Weitekamp says. “It’s the next generation. The one Luke Skywalker flew in the original trilogy was a T-65B. The big visible difference is the X-foils that split apart. Each had an engine. The T-70 was designed to include one large engine on each wing. When X-attack formation is deployed, the engine splits into two semi-hemispheres.”

There was even a third-generation X-Wing Starfighter: the T-85, which appeared in the “Star Wars Resistance” television series in 2018.

No matter which model is displayed, Star Wars fans are likely to recall the X-Wing Starfighter in the climactic battle scene of the very first movie. Luke Skywalker, portrayed by Mark Hamill, is leading a suicidal attack to disable the Death Star’s superlaser, which is preparing to destroy the planet Yarvin.

The Rebel Alliance is trying to exploit a weakness in the Death Star’s design by dropping proton torpedoes in a thermal exhaust port. Several attempts have already failed and many pilots have been killed in the process.

Luke decides to lead a desperate final assault on the Death Star as time ticks down. With archvillain Darth Vader ready to blast our hero into nanoparticles, Luke suddenly feels the presence of Obi-Wan Kenobi, the deceased Jedi Knight who was once his mentor. He speaks to Luke from another dimension, urging him to forgo technology and rely on The Force, the supernatural Power of the Cosmos that can guide him to success:

Luke flips up his blast visor, turns off his targeting sensor, closes his eyes and lets The Force lead him to victory from the cockpit of his X-Wing Starfighter.

And if you close your eyes again while standing near this fabled spacecraft in the Restoration Hangar, you just might see this scene play out once more a long time ago in a galaxy far, far away.