As World War II gripped Europe, Winston Churchill knew that the conflict would be fought on two fronts—on the battlefield and in the scientific lab. The race between the Allies and the Axis powers to achieve technological and innovative advancements was what Churchill called the “Wizard War.” Without science and technology “all the prowess of the fighting airmen. . . would have been in vain,” he wrote.

Among the technologies to develop from this burst of wartime innovation was radar, wizardry that would eventually lead to the the transistor. It was in December 1947 that engineers John Bardeen, Walter Brattain, and William Shockley debuted the transistor effect, the building block for all modern electronic devices, at Bell Labs headquarters in Murray Hill, New Jersey.

While the devices of the time relied primarily on the more delicate, energy-inefficient vacuum tube technology, the transistor, which used semiconductor materials to amplify electronic signals, allowed for products that were smaller, more durable, and more easily produced. For this, all three would be awarded the 1956 Nobel Prize in Physics.

The U.S. military, recognizing the transistors’ potential to improve everything from radars to rockets, quickly seized on the new technology—to such a degree, in fact, that several years went by before it was applied to consumer products. “The military is buying all of these things they can get their hands on,” says Harold Wallace, a curator at the National Museum of American History. “But it was obvious to everybody that consumer grade radios based on transistors would be a good thing. The question is, when could they make it happen?”

The answer came 1951, when two companies teamed up to begin researching a new idea: a small, portable radio. Texas Instruments supplied the transistors to Idea Inc., who designed, produced, and—three years later—finally debuted the Regency TR-1 in November 1954, just in time for the holiday-shopping season. In the collections at the American History Museum resides one of the original Regency models, donated in 1984 by Dr. Willis Adcock, a member of Texas Instruments’ original transistor team, for a 1986 exhibition on microelectronics. Only a few inches tall and encased in red plastic, the radio originally retailed for $50—about $400 today.

Almost immediately, the in-demand Christmas gift of 1954 began to change the way that Americans consumed their music; radio, once a family activity where everyone gathered around a single static machine, could now become a solitary pursuit, one that followed a person wherever they went.

“Before [the Regency], radios were big. You had to plug them in, and they sat on a table or a floor. It was furniture,” says Michael Jack, a music producer in Ontario and transistor-radio collector (in total, he estimated, he’s purchased and restored about 1,100 of them). “Then all of a sudden, you could stick something in your pocket. It was kind of the start of this social revolution where people could carry their music around with them.” 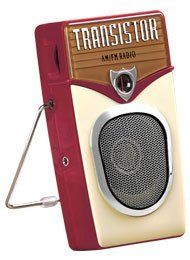 For Idea Inc., which was soon driven out of the transistor-radio game by larger and more prolific companies with cheaper models, the success of the Regency model was robust but short-lived. For the music industry, though, the company’s timing couldn’t have been any better.

Today, a person only needs to plug their headphones into their iPhone—its own piece of technological wizardry—to appreciate the significance of the transistor radio. Bloomberg recently reported that Apple is expecting another iPhone-fueled holiday record in sales between now and the end of the year. The similarity to the 1954 transistor radio—a music-playing device encased in plastic, a few inches wide and a few inches tall—lends credence to the old adage "the more things change, the more they stay the same." And as Apple predicts strong sales for its newest models, Radio Shack and Amazon have recently begun to carry a line of vintage-style transistor radios—just in time for the holidays, 60 years later.