It was high drama at the American History Museum Tuesday morning. We were on the edge of our seats. Word was out that a pocket watch that once belonged to Abraham Lincoln might have a secret message engraved inside of it.

The evidence, while not overwhelming, was enough to pique the museum's interest. It began on Lincoln's 200th birthday, February 12 of this year, when attorney Doug Stiles from Waukegan, Illinois, phoned curator Harry Rubenstein with an intriguing tale. Stiles said that his great, great grandfather Jonathan Dillon worked for a Washington, D.C., jeweler and that according family lore on the day that Fort Sumter was fired upon, Dillon was at work repairing Lincoln's gold pocket watch. Dillon later retold the story to a New York Times reporter. Upon hearing the news that war had begun, the watch maker said that he unscrewed the dial and engraved an inscription into the brass underside of the movement: "The first gun is fired. Slavery is dead. Thank God we have a President who at least will try."

Stiles wanted to know if the museum would open the watch and see if his ancestor's inscription was really there. Rubenstein agreed to do it. "It's sort of amazing," Rubenstein said in an interview last week, "when you think that two years before the Emancipation Proclamation, Abraham Lincoln is carrying this hopeful message in his pocket, and never knowing it." 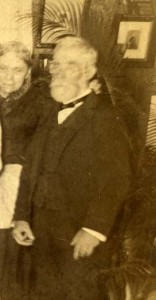 And so a small crowd gathered in an elegant back room chamber at the museum. Cameras crowded around jeweler George Thomas of the Towson Watch Company, who was seated at a makeshift craftsman's bench. As the hour approached, curator Rubenstein solemnly stepped forward. The gold pocket watch was delivered to the bench.

Cell phones had been shut off. The only noise in the room was the ticking of our own watches as Thomas went to work with tiny screwdrivers, tweezers and levers. Stopping occasionally to flex his fingers, he kept his audience on pins and needles. "It will be awhile," he warned. Stiles, accompanied by his wife Betsy and his brother Don Stiles from Bloomington, Minnesota, readjusted himself in his chair a number of times. Finally Thomas, after unscrewing several tiny pins from the watch face and delicately lifting the plate murmured, "The moment of truth."

The inscription was there, we could all tell, Thomas's expression revealed that he'd seen something. Stiles was invited to read it. "Jonathan Dillon April 13-1861 Fort Sumpter [sic] was attacked by the rebels on the above date J Dillon April 13-1861 Washington thank God we have a government Jonth Dillon."

A message from another time. Smiles around. The Stiles family seemed relieved. "I feel more in touch with Lincoln," said Doug Stiles, and then with a grin, he added, "Hey, that's Lincoln's watch and my ancestor put graffiti on it."