Somehow managing to endure for five decades and five generations of the fictitious Horton, Brady and DiMera families, "Days of our Lives," NBC’s longest scripted daytime drama, is, in fact, your grandmother’s soap opera.

More than 70 series have aired since the 1960s, and "Days" is just one of four remaining on the air. Credited with creating intimate, family-like characters and compelling story arcs involving groundbreaking social issues, "Days" claim millions of viewers in more than 25 countries each weekday.

To celebrate the 50th anniversary of “love, lust and drama,” marked by episode 12,714 airing today, members of the "Days" cast and crew gathered in Washington, D.C., last week to donate show scripts and props to the National Museum of American History. The donation was organized as part of an on-going partnership the museum has with the National Academy of Television Arts and Sciences.

The crew also pledged to provide elements of the show’s opening sequence, including the iconic two-feet-tall hourglass and the original audio tape of late cast member MacDonald Carey saying, “like sands through the hourglass, so are the days of our lives.”

Among the reasons fans cite for their loyalty is a kinship with characters and the escape from reality provided by the far-fetched, exotic stories.

“Daytime dramas come into your home every day. These people become your family, “ says Dwight Blocker Bowers, curator in the museum's division of music, sports and entertainment.  “You are embraced literally by the show and you embrace it.”

Susan Seaforth Hayes, 72, the only actress to have appeared on "Days of Our Lives" for all six decades of production, points out the sheer amount of time that she has shared with her viewers. Hayes, who started on the show in 1968 playing Julie Olson, eldest grandchild of the original matriarch and patriarch, is now, with her real-life and on-camera husband Bill Hayes, one of the show's elder power couples.

She explains that a typical film star with four movies to her credit might produce 8 or 10 hours of entertainment. “But the American public has had a chance to know my character and my husband’s for thousands of hours in thousands of situations. It’s not stardom, it’s true intimacy and it’s true support,” she says.

For viewers, watching the show is often a family affair passed from one generation to the next. Lisa Lang, 46, of Roxbury, New Jersey, started watching "Days of Our Lives" as a high school student in 1983 as a way to spend time with her grandmother.

“It is one of my best memories of her,” Lang says, who records the show and watches either at night or on the weekend with her daughter and husband. Thirteen-year-old Camryn says, “it’s good mother-daughter time.” And her husband Mike, 50, “loves the escape that the crazy story lines offer.”

“We hear the music and it makes me think of my mom,” Carranza says. “It’s nostalgic and I find comfort in it,” she continues. Her daughter, 23-year-old Dominque Hetu, used the show as a vehicle to catch up with her mom when she was away at college. Dominque also loves the flashback scenes, because her mom can always explain the backstories.

Daytime serial dramas began as 15-minute radio shows during the 1930s. They earned the moniker “soap operas” because they were sponsored by detergent companies, including Proctor & Gamble. During the 1950s the shows made the leap to television and eventually expanded to hour-long dramas, with several all-important commercial breaks.

According to "Days'" co-executive producer Greg Meng, 60, who has a new book about "Days", “the show is driven by storylines that evolve with the times, so we are relevant and current.” In 1976, Time magazine named it “the most daring drama,” because it “encompassed every trend from artificial insemination to interracial romance.” Since then, many other daytime serials have featured sensitive topics like rape, alcoholism, mental illness and drug abuse long before these issues were seen on primetime television.

“I am a very strong believer in daytime television because of everything that we learn,” says 85-year-old actress Tippi Hedren, star of Alfred Hitchcock’s The Birds and Marnie. Hedren, who is the mother of actress Melanie Griffith and grandmother to actress Dakota Johnson, appeared in a 1990 episode of "The Bold and The Beautiful" soap opera that dealt with incest of a young boy.

“I think back on those brilliant writers who said, ‘let’s make something important come out of this. Let’s make a story that has purpose and value to it,’” Hedren remembers.

The soap opera genre has endured significant challenges from real-life dramas that threatened to cannibalize its viewership. According to Hayes, the first and only time that "Days" stopped production for several weeks was during the Watergate hearings during the summer of 1973. All three major networks preempted their daytime programming to air the Senate hearings investigating the break in and wiretap of the Democratic National Committee at the Watergate hotel. Hayes revealed that she used that unplanned work stoppage to sneak off to Tahiti with her soon-to-be husband, for a vacation.

The eight-month murder trial of former NFL star and actor OJ Simpson, beginning in January 1995, proved to be another challenge as viewers chose to watch the horrors of the real-life drama instead of the soaps, says Hayes.

“Our writer and producer Jim Reilly felt that we needed something so tremendous and new that the audience would return to watching the show,” explains Hayes. Reilly developed a story line in which psychiatrist Dr. Marlena Evans, who has been played for 32 years by 68-year-old Deidre Hall, was possessed by a demon that was ultimately exorcised.

“Over the years there were a lot of firsts on our show, I played the first crib death or Sudden-Infant Death Syndrome, the first twin sister story, and we performed the first gay wedding, but it will be the possession story that will be on my tombstone,” Hall jokingly admits.

To increase market share, NBC even cross-promoted "Days" by spoofing it on "Friends," one of its best-rated primetime sitcoms in the 1990s. "Friends" character Joey Tribbiani, played by Matt Leblanc, was a struggling actor who landed a reoccurring role as Dr. Drake Ramoray on a fictitious iteration of "Days". Real-life "Days" cast members made appearances on "Friends," which lampooned the soap’s exaggerated story lines by having Tribbiani’s character die off and then be brought back to life with a brain transplant.

As one of the last four daytime soap operas still in production, "Days" has achieved an impressive milestone in turning 50. The show has been renewed though September 2016, but no one knows if the veteran soap will survive to celebrate another significant anniversary.

“I hope it continues because it really is family to so many people. It's changed their lives and I think we’d be letting down a large number of people,” says co-executive producer Meng.  “We have people who not only depend on the show, but who are also inspired by it.” 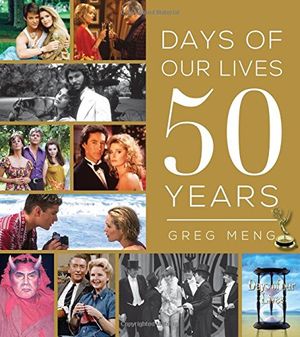 Days of our Lives 50 Years