Buttercup and Westley may have doubted the ROUS' existence in 1987's The Princess Bride, but the love-stricken pair quickly caught on when the "Rodents of Unusual Size" attacked.

A team of scientists, including the Smithsonian's Kristofer Helgen, the curator of mammals at the National Museum of Natural History, recently discovered a giant rat. Evidently, it was a rodent of unusual size, weighing a whopping three and a half pounds and measuring an incredible 32 inches from nose to tail. It wasn't found in the Fire Swamp, but in a crater of an extinct volcano in Papua New Guinea. "It's a true rat, closely related to the rats and mice most of us are familiar with, but so much bigger," said Helgen. 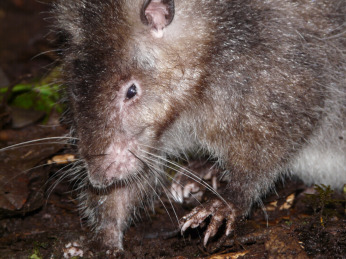 The team, Helgen, Muse Opiang, a biologist with the Papau New Guinea Institute of Biological Research, and a film crew from the BBC found the rat after spending several cold and rainy nights searching the mountain rainforests. "Our hearts were in our throats," said Helgen. "It was an unbelievably exciting moment. It was all the more incredible that the BBC was there to film it."

The volcano's crater is two and a half miles wide and large walls—nearly half a mile high—line the entire circumference basically isolating the animals from the outside world. Apparently the real thing is much more tame than the film version. The rat was completely docile when confronted by the researchers, which suggests the animal was unfamiliar with humans.

The same expedition found 16 species of frogs, one species of gecko, three species of fish, at least 20 species of insects and spiders, and what might be a new subspecies of marsupial. They're calling the marsupial the Bosavi Silky Cuscus, and it looks like a tiny bear and weighs just over five pounds.