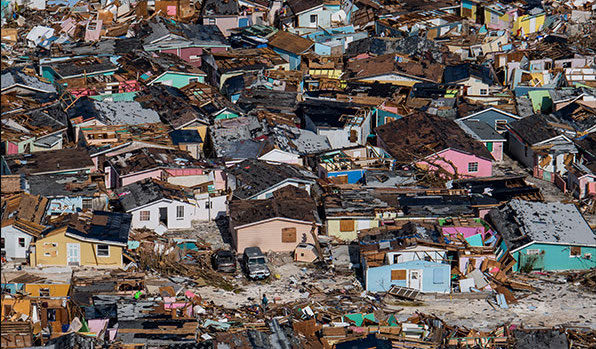 The eye of Hurricane Dorian made landfall in the Bahamas (above: Marsh Harbour after the storm) on September 1, 2019, leveling homes, crushing cars and killing people. Carolyn Van Houten/The Washington Post via Getty Images

Such was the destruction wrought by Hurricane Dorian that struck Abaco and Grand Bahama islands in early September with 185 mile per hour winds and floods surging more than 20 feet high. The official death toll at 67 is in flux, because hundreds are missing, their bodies likely swept out to sea. Thousands, rescued by family, neighbors, first responders, doctors, nurses and the U.S. Coast Guard, are still homeless.

Yet in the face of it all, the people of The Bahamas are strong and resilient, determined and committed to getting past the current disaster.

In Nassau, the capital—hosting thousands of evacuees—there was very little physical damage. And throughout the remaining Bahamian islands, daily life continues, with the country’s famous sun, sea and sand beckoning tourists to rekindle the economy and support recovery from the worst natural disaster in the nation’s history.

Part of that recovery is cultural, and our Smithsonian team was there to work with Bahamian colleagues to help save and secure the paintings, historical artifacts, books and other touchstones of the country’s history and creativity, as well as the institutions that house them.

Kim Outten-Stubbs, the head of the National Museum of the Bahamas, Antiquities, Monuments and Museums Corporation was our main contact. I’d last worked with Outten-Stubbs and other cultural figures 25 years ago, when we produced a living exposition of Bahamian traditions for the 1994 Smithsonian Folklife Festival. That work with Bahamian cultural leaders, scholars and exemplary musicians and artists created a bond of trust that made renewing our current collaboration easy and natural, even with new leaders like Amanda Coulson, executive director of the National Art Gallery of The Bahamas.

Artifacts and artwork had been tossed about. Items were wet and mold was setting in, compromising the condition of collections documenting the life and history of these communities. Interestingly, both communities had been founded in the 1780s by British Loyalists from New England, Florida and the Carolinas, who had fled the U.S., to settle in the islands of the British Bahamas. The towns recalled small New England villages by the sea, with historic clapboard cottages, quaint gardens, picket fences and meandering lanes—now as a result of Dorian, all in disarray.

The descendants of these founders created the museums and populated them with the artworks, photographs, documents, tools and furnishings that told their communities’ 240-year history. Volunteers who ran and staffed the museums had begun recovery work. In an effort to get ahead of the mold at the Lowe museum, workers were tediously stripping off the wet wallpaper. New timbers propped up the front porch.

The Smithsonian team jumped in to help. We quickly assessed and documented the state of the two museums, and advised folks of what needed to be done to save the collections. For the Lowe museum, we evacuated sensitive items—photographs, paintings, documents, textiles and books—so they could be aired out and then be secured in other buildings to prevent further damage from mold and the elements.

In Hope Town, at the Loyalist Memorial Sculpture Garden, figurative sculptures and those of historical leaders were knocked off damaged pedestals. We helped to identify a local artist in nearby Little Harbour, who specialized in bronze and was running an active foundry, and could probably do the repairs.

We also visited Hope Town’s historic red-and-white striped Elbow Reef Lighthouse initially built in 1863. It is the world’s last hand-cranked, kerosene-burning lighthouse in operation—a monument to 19th and 20th century engineering and optics—with its beacon still signaling ships at sea to help them navigate the nearby reefs.

The local Elbow Reef Lighthouse Society provided a detailed and thorough report on damages. The watchtower, lens and prism survived, but the turning system, with fuel lines, pulleys and cables need to be cleaned and likely replaced. The structure’s winding staircase, floors, windows and doors need repair, as do the accompanying cabins for the lighthouse keeper and assistant. Our team inspected the site and offered strategies for securing funding for restoration.

On Green Turtle Cay, a friend of the famed local artist Alton Lowe had managed to save several dozen paintings by providing storage in his home. So too in horribly leveled Marsh Harbour, paintings by Eddie Minnis and his children fortunately had been evacuated before the storm to a storage facilty well south of the hurricane’s track. The works are Bahamian national treasures, but now, here they were being presented to conservators stacked together or held in damp boxes and suitcases.

Wagner and Kennedy often work in well-equipped museum laboratories, but here in the Abacos they were assessing conditions of paintings in a garage, and on a seaside porch of a hurricane-evicerated art gallery offering treatment advice and guidance. Conservators bring years of education, technical training and experience to treat—that is, to conserve and restore valuable artworks and historical artifacts. Like physicians set up in makeshift MASH units or field stations, Wagner and Kennedy went to work on their “patients.”

“Take it out of the frame, take off the backing, remove the mat, lightly brush off the traces of mold,” they instructed.

We visited historic schoolhouses, civic buildings, nature sites and libraries in the Abacos and in Grand Bahama. At the historic Sir Charles Hayward Library on Grand Bahama, staff and volunteers were hard at work saving books and furnishings from mold following some mild flooding. They would have to replace some books and they wanted to digitize materials that documented community life.

But overall, they were getting back on their feet. Sadly, this wasn’t the case for libraries in the Abacos. At a recently opened new community library in Marsh Harbour, shelves were overturned, its books unsalvageable. An older library in Green Turtle Cay was even more damaged, with the building severely compromised.

Back in Nassau, we visited an evacuation shelter housing some 700 survivors, mainly Haitians from flooded shantytowns in the Abacos. The Bahamians were doing their best, setting up a gymnasium and tents with beds, mattresses, bathrooms and showers, medical and recreational facilities. It was daunting to see families, young, old, ill and disabled, living mattress to mattress with hundreds of others, all their possessions bundled close, and now entering a third month since their evacuation. Many had new, donated clothing, food and snacks, treatment and help, evident from the attention of social workers, police and friendly volunteers.

Two volunteers were providing uplifting daily music and interactive performance programs for the children with dance workshops, singalongs and other activities. On our second visit, we attended a talent show. Children gathered, turning the gym floor into a village plaza. People loved it. Haitian children performed, sang and played instruments. The volunteer organizers proclaimed: “There’s talent in the shelter!” A group of teenaged girls performed songs they’d written since their evacuation. The poignant words hit home.

That’s a problem right here, I don’t know how it started, but I know how to finish it. Right now I’m stuck, thinking about it. Cause you took away the ones I love, and my heart is broken up.

And then the chorus.

How can you make your dreams come true if you don’t know how to take the first step?

Excited young children jumped around as they are wont to do, grabbed for snacks, and settled in the laps of our Smithsonian team and Bahamian staff.

One couple, a Haitian man and woman performed a beautiful song about their miraculous survival, but then told us they had to leave—they and their son were being deported back to Haiti since they had migrated to the Bahamas without needed visas.

It’s a tough situation for many to deal with, Haitian and Bahamian. But the message at this center was that people had survived, were cared for, and had a future—symbolized by everyone joining an exuberant finale, singing along to Bob Marley’s rousing anthem: “"Don't worry about a thing, 'cause every little thing gonna be all right."

These evacuees, other survivors, first responders, elected officials and everyone who came through the hurricane and wrestled with it has a story to tell.

That became evident talking to just about everyone we met. That experience—taking narrative form as stories and tales to tell to future generations—is now part of Bahamian cultural heritage. The stories document damage and survival at the personal level—how people fled the surge, or clawed through house roofs in rising water, or rescued neighbors and treated their injuries. They offer lessons in perseverance and resilience in the face of nature’s fury. And in their telling offer a therapeutic vehicle for exorcising the terror and fear that gripped people during the storm’s worst periods—a storm that swirled above them for two whole nerve-wracking days.

Working with our Bahamian colleagues we plan an oral history project to document the stories and provide some relief to those who lived through Dorian. The Smithsonian team will follow-up with advice, guidance, visits and training sessions for affected cultural workers and organizations so they can take care of their collections and facilities. We’ll help in writing grants and developing proposals to bring resources to bear on the recovery. We’ll work with the National Art Gallery of The Bahamas on more advanced training, but also to help Bahamians throughout the nation improve their knowledge and skills so they can better prepare for and recover from future disasters that threaten the cultural heritage they are committed to protecting and preserving for their children.