Sixty-eight years ago today, at 7:55 in the morning, the first wave of Japanese fighter planes reached Pearl Harbor on Hawaii's Oahu Island and opened fire on the anchored U.S. ships and aircraft. More than 2,400 Americans were killed in the attack. In a radio address at 12:30 p.m. the next day, President Franklin D. Roosevelt declared December 7, 1941, a "date which will live in infamy." Soon after, Congress declared war on Japan.

The attack on Pearl Harbor continues to live through the artifacts on display throughout the Smithsonian Institution. Visit the museums and exhibits below, and remember the day.

In the Price of Freedom exhibition on the museum's third floor east, there is a display devoted to the attack on Pearl Harbor. Included in it are a piece of a Japanese plane shot down, a damaged window pane from an Army Air Field hangar, a "Remember Pearl Harbor" lapel pin, a "Remember Dec. 7th!" poster and a Purple Heart medal awarded to a serviceman killed in action aboard the USS Arizona, among other objects. 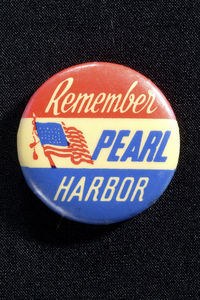 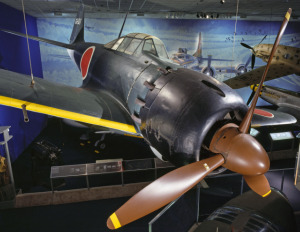 The Mitsubishi A6M5 Zero, on display in the museum's second-floor World War II Aviation exhibition, is an example of a type of naval fighter the Japanese used in their aerial attack on Pearl Harbor, as well as kamikaze attacks that occurred at the end of the war.

The museum has in its possession an envelope postmarked at 8 a.m. on December 7, 1941—the very moment that the Japanese bombers pelted the U.S. fleet at Pearl Harbor. The letter, stamped in Honolulu, was being sent from a Marine by the name of John Rion to his business partner in Perry, Iowa. It is part of the "Delivering Hope: FDR & Stamps of the Great Depression" exhibition, on display through July 6, 2010.

A handstamp tool dated "December 6, 1941 PM" was recovered from the sinking USS Oklahoma and given to the Smithsonian. Though not currently on display, it is part of the Postal Museum's collection.