There’s nothing overtly impressive about the section of a luncheonette counter placed behind glass in a corner of the National Museum of American History’s temporary gallery (“Treasures of American History,” on display at the Air and Space Museum while the NMAH gets a makeover). 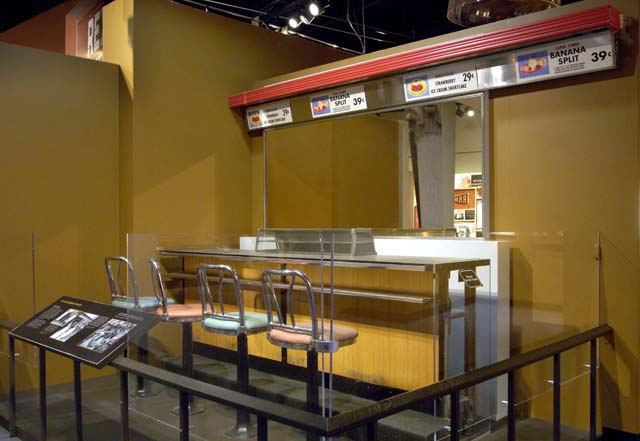 The padded vinyl seats on the stools look a bit grubby, and there are scuff marks on the base of the counter where customers’ feet once fidgeted while they sipped their sodas.

But an object is rarely just what it appears to be on the surface – it has a narrative context that would often remain invisible without historians and curators to sleuth it out or guard its memory.

These humble chairs and counter, once part of the Woolworth’s luncheonette in Greensboro, N.C., became a stage for an important scene in the civil rights movement when four African American college students sat down in them on February 1, 1960. The students asked to be served – a direct challenge to the store’s custom of refusing counter service to non-whites (they were allowed to order food to go, but not welcome to eat there).

They didn’t get served, but they didn’t leave, either. They stayed until closing, and came back in greater numbers the next day. And the next. The student-led “sit-in” protest ultimately lasted nearly six months, until it hurt the store’s bottom line so much that the manager finally relented and decided to begin serving African Americans. The sit-in attracted hundreds of supporters, harassers and (most importantly) journalists, and is now considered a milestone in the American civil rights movement.

Last week, at an informal “curator’s talk” in front of the lunch counter exhibit, Bill Yeingst, chair of the NMAH’s Home and Community Life Division, talked about how the lunch counter wound up in the Smithsonian’s collection.

Yeingst said he was home doing the dishes one day about 15 years ago, when he heard on the news that Woolworth’s was planning to close about 800 stores nationwide.

“That lunch counter had been in the back of my mind for a long time, and I thought, that would be a tremendous thing for the institution to have.”

Yeingst and his then-boss, Lonnie Bunch (now director of the Smithsonian’s National Museum of African American History and Culture), flew down to Greensboro and met with community leaders. Woolworth’s corporate headquarters said the museum could have part of the counter, but only if the Greensboro community approved. And it did.

Now, the lunch counter is a prominent part of American History's permanent collection, typically displayed within view of the Star Spangled Banner to symbolize the central importance of the American civil rights movement.

“When you look back on your career, it’s one of those highlight moments. You feel like you’ve actually made a difference,” Yeingst said, smiling.

(Photograph courtesy of the National Museum of American History)