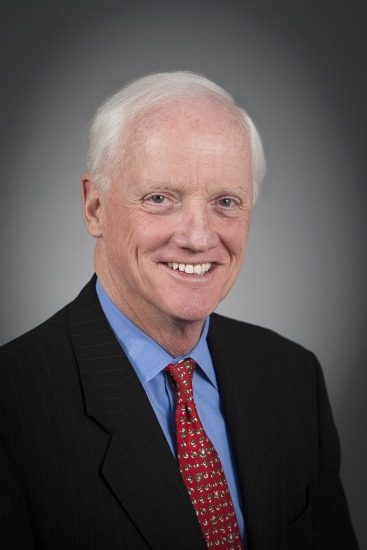 Frank Keating comes to sign copies of his book at the American Indian Museum. Photo courtesy of the American Bankers Association​

During his career, Frank Keating has served as an FBI agent, a U.S. Attorney and a two-term Governor of Oklahoma. His latest turn isn't what you'd expect: he's the author of children's books on American history, including Will Rogers: An American Legend, George Washington: Our Founding Father and Theodore. Tomorrow, Saturday, January 21 from 12 until 2, he'll be visiting the American Indian Museum to sign copies of his most recent book, The Trial of Standing Bear. We spoke with Governor Keating about his entry into children's literature, the story behind his newest book, and the similarities between children's stories and politics.

How did you first get into writing children’s books?

Actually, it originated with an artist. As governor, I always had an Oklahoma artist paint our state Christmas card—a commitment to encourage Oklahoma arts. One year, the card was painted by Mike Wimmer, an artist. I really liked it, so I bought the original painting from him, and during the course of our conversation he said, "Oh, by the way, my publisher wants me to find someone to write a children’s book on Will Rogers, do you know of anyone?" And I said, I’d love to give it a whirl.

So that’s how it all started. The first book, called Will Rogers: An American Legend, was very successful. All of the proceeds have gone to the Will Rogers Museum in Claremore, Oklahoma. Then we did a book on George Washington, and most recently, before our new book, we did one on Theodore Roosevelt.

Your newest book, “The Trial of Standing Bear,” tells a somewhat lesser-known story in American history.

Standing Bear was a chief of the Ponca tribe. They were historically based in Nebraska, on the banks of a Niobrara River. They were a peaceful tribe and they were agricultural. Some years after the defeat of Custer, the military gave away Ponca lands to the Sioux and the Cheyenne and forced the Poncas south to Indian Territory, which is now Oklahoma. They settled there, but around a fourth of the tribe died on the way, because they had no provisions over the winter. Standing Bear’s son died, and Standing Bear, along with a few of his followers, decided to turn back and buried him in his ancestral territory.

He was promptly arrested and detained.  General George Crook, who was Custer’s boss at Little Big Horn, was offended at how badly these un-warlike people were being treated, and he insisted that this case go to Federal court in Omaha, Nebraska. It was in this case that it was established that Indians were people, under the Constitution. By 1880, Standing Bear had become a national figure, because he spoke [to] the plight of his tribe and Native people.

What was most beautiful about the case was his oration in court, in which he argued for the rights of the Ponca. The oration caused everyone in the court to cry, even the judge. I knew this was a story that needed to be told, and when I told the story in a commencement address at Marymount University, many of the faculty were dabbing at their eyes as well. This was the beginning of the Indian rights movement and was seminal in U.S. history, but it was barely known.

Do you see any similarities between writing children’s books and being in politics?

I think, in both cases, what’s important to me is always assuring the public that they own the government, that public service is service, and that public officials should always represent not themselves, but the public at large. And in telling these stories to children, whether about a Native American figure or anyone else, I want to show that we are a society of many peoples, and no matter what your lot in life, you can become extraordinarily successful because of this system.

Particularly from my books, there’s the story of Will Rogers, who was a Cherokee Indian with just a high school degree, and went on to become one of the most famous Americans in the country. Theodore Roosevelt had a privileged background, but he lost all his money raising cattle in North Dakota, and ended up living by writing books. George Washington stopped his formal education at age 15. These are all extraordinary stories of leadership and courage, and the lesson to children is that every child should view him or herself as an opportunity in a free society.

My next book is on Abe Lincoln, and it’s an even more extraordinary story. He had less than one year of formal education, yet became the first American to have his writing etched in stone at Westminster Abbey. I want to share with children that they too can become great if they put their mind to it. And so I’m a determined believer in telling America’s story, particularly to young people.