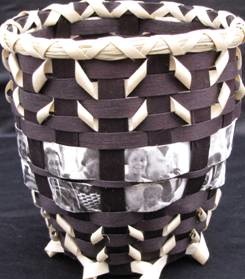 Kelly Church is known for interweaving pictures of her ancestors into her baskets. Photo courtesy of NMAI

Kelly Church (Grand Traverse band of Ottawa and Ojibwe) is a Michigan-based basket weaver who, along with Caddo potter Jereldine Redcorn, is currently visiting the National Museum of the American Indian for their Artist Leadership Program. She will be speaking today with Redcorn at 2 p.m. at NMAI.

One of her primary materials is the black ash tree, which is being terrorized by the emerald ash borer, an insect introduced to the Northeast United States from Asia that is predicted to destroy every black ash tree in Michigan within the next ten years. Church has committed herself to educating both her people and the greater public about the black ash. For the past couple weeks, she has been looking at black ash carvings in the museum's collections to learn about other ways the black ash has been used by her people. She hopes to pass the information along before the black ash dies out completely.

Tell me about what brought you here to NMAI's Artist Leadership Program.

This year, I’m doing a symposium, and it’s a follow up to a symposium I did in 2006, in which I invited all weavers and people of the Northeast in to learn about the emerald ash borer, which we first discovered it in Michigan in 2002. It will address the work that we’ve been doing collectively and individually in our own states on collecting seeds, working together to teach our children, where all communities are at different levels.

In Michigan, we’re perhaps some of the most traditional basket weavers in the Northeast. We take our kids into the forest when they’re first able to walk, and they’re out there and they’re learning how to identify their trees. Up in Maine, they have an economic-based system where they have a harvester who harvests for the community and they purchase [the ash trees] from him. They’re just beginning to teach their children how to identify the trees. So we’re all working together to document how to harvest, how to replant those seeds, what good basketry is, all of those things. Because what we’ve come to realize is that in Michigan, we’ve been [weaving baskets] continuously for thousands of years and we’re most likely going to have a whole generation that is missed if we do lose the ash trees as predicted.

When is the ash tree predicted to disappear?

It’s going to depend on which community you’re in. In my community we’re looking at… ten years would be wonderful, but that might be too optimistic. It really only takes the emerald ash borer three years to kill an entire ash stand, and emerald ash borer is all over the state. The whole state’s quarantined now.

We’ve been doing seed collections as tribal entities and sending them to a seed bank in Fort Collins, Colorado. They’ve been partnering with us to save our seeds for each tribe, and they will only let ancestors or tribal members come and pick those seeds back up; whomever we designate them for. They have a whole program in place, so that’s nice. I always tell people about seeds that I collect, I will save a third for my descendants, a third for my tribal people and a third for the state of Michigan. Because between those three entities, some [of the seeds] will be replanted.

Since you’ve been here in Washington, what have you found that you’re excited to share?

I came here last year, and what I did was focus on all the fibers of the Northeast that we used to use that we have already lost the tradition of using, which was weaving cattail mats and brush. I was trying to look at other things that we wove with in light of losing the black ash. What else could we bring back to the communities?

What kind of things did your people carve?

We carved pipes, we carved cradleboard, handles for baskets. The cradleboard specifically I was looking at because I knew we did it but I had never seen any in the collections, so I’ve been looking at a lot of those. They’ve also showed me arrows carved out of black ash, and utilitarian spoons. So there were all these wonderful things that I didn’t realize.

What do you focus on in your work?

I grew up in a basket weaving family, so I just thought everyone in the world wove baskets. So I thought, I’m going to be a painter, a photographer, a sculptor. And then when I started taking care of my grandfather, he had Alzheimer's, every time someone would come drop off or help us, he’d say, “We need to make them a basket.” So I really got into the basketry and just kind of embraced it. So I’ve been pretty much a full-time basket weaver for the past decade, since I was caring for him. Right after I got back into it full-time is when the emerald ash borer came along in our state.

I weave when I can, but the meetings and education about this emerald ash borer is the number one priority. If we don’t educate people and collect seeds, we won’t have it in the future.

Why is basketry so important to Natives of the northeast?

It’s not really just a tradition of art, what we do. It’s really who we are as people of the Northeast. Creation stories are associated with black ash, there’s medicines made from black ash. That one little seed brings together family, it provides housing, it provides food. After that tree’s grown, everything that we do with those ash trees, it’s amazing to look at it in that bigger aspect.