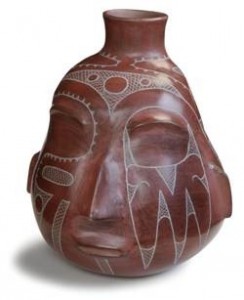 Jereldine Redcorn (Caddo/Potawatomi) is one of two American Indian artists currently visiting the National Museum of the American Indian as part of the Artist Leadership Program. The program brings indigenous artists to Washington, D.C. for two weeks to research the museum’s collections and to network and develop their careers. Redcorn has dedicated herself to reviving a lost pottery tradition of the Caddo people, an art that disappeared when the tribe was removed from the greater southern plains area (in today's Louisiana and Arkansas) to Oklahoma in the early 19th century.

Caddo pottery dates to around 800 A.D. Made mostly from clay, the pots—which include both utilitarian cooking vessels and fine wares—are known for burnished, engraved and cross-hatched designs in spiral patterns.

Tomorrow at 2 p.m. at the museum, Redcorn will present on her art and culture along with Ottawa/Ojibwe artist Kelly Church, the other artist in the program (read my upcoming interview here tomorrow). I spoke with Redcorn about the day she learned that President Obama and the First Lady selected one of her pots for display in the White House. She also discussed her midlife career change and the importance of reviving this lost art.

What is the purpose of your work?

I’ve been making Caddo pottery for about 15 years. Actually, I’m reviving Caddo pottery. About five years ago I got to come to the Smithsonian to be part of an exhibit. I didn’t actually get to look at the collections, but this time I did. The Smithsonian purchased three of my pieces, and when the Obamas were doing their makeover, bringing new art in, they selected one. Now I can say it being calm. But I was so pleased on several levels, for myself, for my tribe, the Caddo, that a piece of [our pottery] is in the White House.

How did you find out?

It was just amazing. This lady from NMAI, Ann McMullen called me, and she explained to me that one of my pieces had been selected for display in the White House. I just wanted to jump and scream, I was so excited. I could not believe that this was happening. It was really great for Caddo pottery. The Southwest pottery [like that of the Navajo tribe] is so well known, and no one really knows about Caddo pottery. I have to explain, I have to educate, and though it’s a lot of fun, it’s really interesting how many people do not know how great our pottery was and how great our tradition was.

Were you a sculptor before that?

I was not an artist. I’m a math teacher, math and English. My plan was, I was going to make the pots, and my daughter, who was an artist, would put the designs on. She said, “You can do it, you just need to practice drawing.” I did, and it’s really amazing how something will happen if you practice. Actually, I should have known that as a teacher, because everyone has to learn multiplication. Kids will come in just scared to death of algebra, and I would say, “You can do it.” I think I just ran that record through my head, and said, “You can do this.”

I also had one lesson from an archaeologist. They were on an archaeological dig in Texas, but they were on the Oklahoma side. They asked our dance group to dance. I went down there, and they took us to a museum, and it was the first time I had seen Caddo pottery. I think I was 54.

You had no idea this existed?

Maybe somewhere in the back of my mind. But there was a man there with us, maybe 75 years old, who said, “I didn’t know we did this.” This pottery was so beautiful and so inspiring that I set out to revive it. I didn’t set out to revive it myself, but that’s just how it turned out. When I started, my tribe, the Caddo, would walk by, and they weren’t really interested. They are now, and that’s what’s so wonderful.

How was the tradition lost?

Unfortunately, we had been removed, like the Cherokees, the Trail of Tears. So other people knew about our pottery, but we didn’t. As we were pushed further and further by settlers, hunting and surviving was more important. But if we hadn’t been removed, I think we would’ve recognized this pottery and restarted it long ago.

What have you learned so far over the past couple weeks?

I spent a couple of days with the Caddo pottery, and then I went into Caddo clothing and drums and moccasins. And I began to see a relationship between all those designs. I think by the end, I will have grown so much as an artist.

Tomorrow, artists Jereldine Redcorn and Kelly Church will discuss their work at 2 p.m. at the American Indian Museum's Resource Center, on the third level of the museum.